Both sides win in Brewer-Obama tiff

Arizona governor wins right-wing cred with one wag of her finger, the president wins with people who hate her 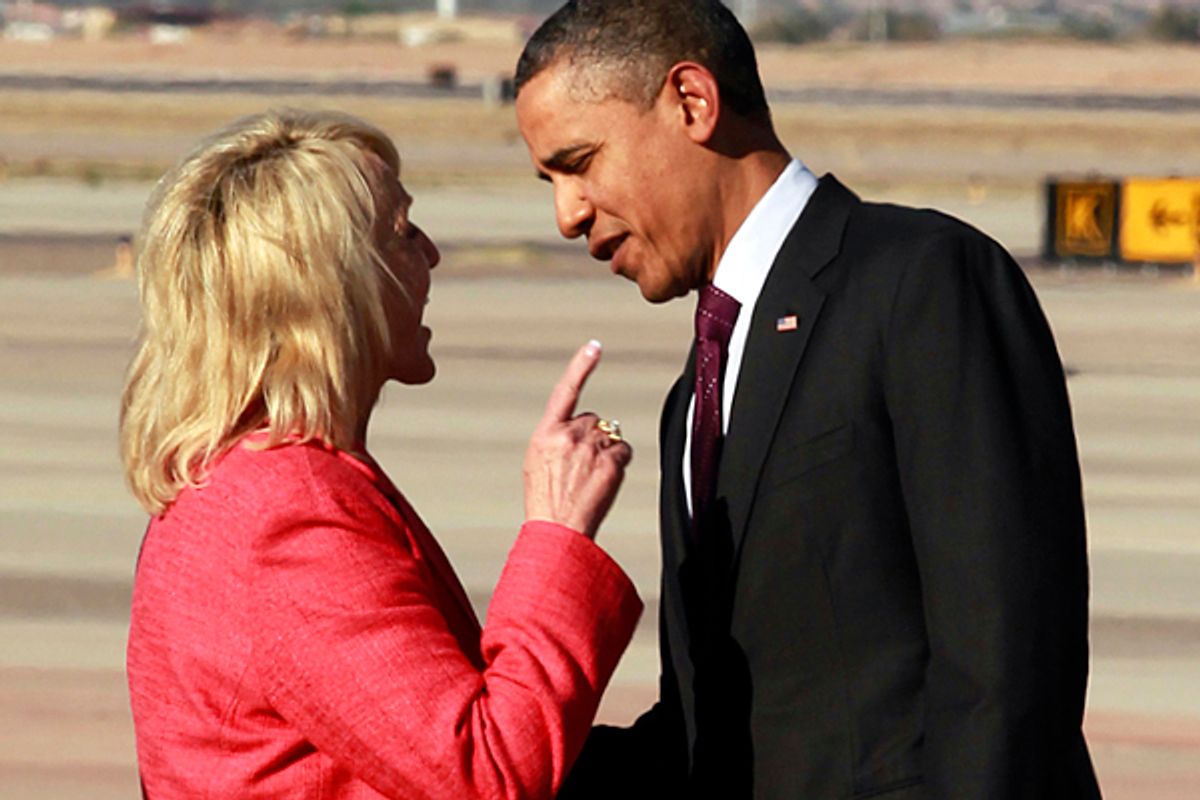 Arizona Gov. Jan Brewer yesterday engineered the creation of a photograph of herself wagging her finger at the president, then went on a brief media tour calling the president "thin-skinned" and promoting her book.

The president took a trip to Arizona ostensibly to do something involving jobs and "innovation," and immediately upon exiting Air Force Once, President Obama and Gov. Brewer began arguing. The argument took place outside the earshot of reporters, but they saw Brewer wag her finger, Obama and Brewer talk over each other, and Obama walk away from Brewer while she was still speaking (which, seriously: enraging move, right?).

Brewer then went over to the reporters and said the president was mad about her book, "Scorpions for Breakfast," available now at booksellers everywhere. Drudge soon posted the pool report and the finger-wagging picture. Brewer went on Fox and a local radio show. She posted the picture on her Facebook wall. It was brilliant, really.

Brewer's story on Fox and at the airport was that the president started it. She gave him an envelope and he yelled at her about something she's written in her book. (Brewer says the envelope contained an invitation to visit Arizona and meet with her, which ... wasn't Obama in the process of doing that?) But on the radio, she said:

“I asked him if he had read my book, ‘Scorpions for Breakfast.’ And he said that he read an excerpt and he didn’t think that I was very cordial,” Brewer told a conservative radio talk show host in Phoenix. “He was somewhat thin skinned and a little tense to say the least.”

The book passage in question concerns an earlier meeting between Brewer and Obama, which the White House characterizes as "a cordial discussion" that Brewer "inaccurately described."

The day the meeting in question took place, Brewer herself described it as "very cordial." But she was apparently just being polite, because a year later, she said:

(I can understand why Brewer might have felt a bit insecure during her meeting with President Obama, because he is a pretty smart guy and she is an idiot. Obama might not even have understood how insecure he was making her feel, just by having the ability to turn his thoughts into coherent sentences.)

In her book, Brewer described the president as "condescending" and said, again, that he "lectured" her. She is using similar language to describe this encounter. It's not hard to imagine that it was scripted to go down this way.

Regardless of who started the argument, it's a net positive for Brewer, which is why she's blabbing about it. Remember what happened when Joe Wilson yelled "you lie" at Obama? He received a formal rebuke from the House ... and raised $2.65 million in less than a month. Jan Brewer is already selling more books. (Maybe she can use that new book revenue to help her state buy back the capital it sold and now wants to buy back at a loss, because Arizona is run almost entirely by idiots.)

Obama is really Brewer's single best political ally, even if he is an inadvertent one. She is only governor because Obama selected her predecessor, Janet Napolitano, to be his Homeland Security secretary; I highly doubt Republicans would've nominated her had it been up to them to pick a candidate. But now she's a national figure for signing the notorious anti-immigration bill, and the enmity of the White House only increases her conservative cred.

Brewer is too vacant and nuts to have any sort of "for serious" future political career but there is a decent living to be had in being a right-wing folk hero, as even someone as dull as Brewer understands. Michele Bachmann is still in Congress. People even still pay Joe the Plumber to appear places and do things, I am told. Brewer could probably retire off this picture of herself giving our "thin-skinned," "patronizing," smarty-pants president what-for.

But as Jonathan Chait writes, the encounter was not actually bad for Obama. He will have come off as pedantic and rude to people already inclined to hate him, but a lot of people are very inclined to hate Jan Brewer. Those people include Latino voters and most literate adults without significant racial resentments. I don't share Chait's belief that Obama engineered the tiff for this reason (the White House was too slow to respond to Brewer's characterization of the conflict, for one thing), but it obviously won't hurt his chances at boosting Latino voter turnout in Arizona this November.

So in the end, they both win, thanks mostly to how much the political press loves a ginned-up confrontation like this.