Don't wish for a Newt nomination

Yes, Obama would very likely beat him, but it's still not worth even the smallest risk of a President Gingrich 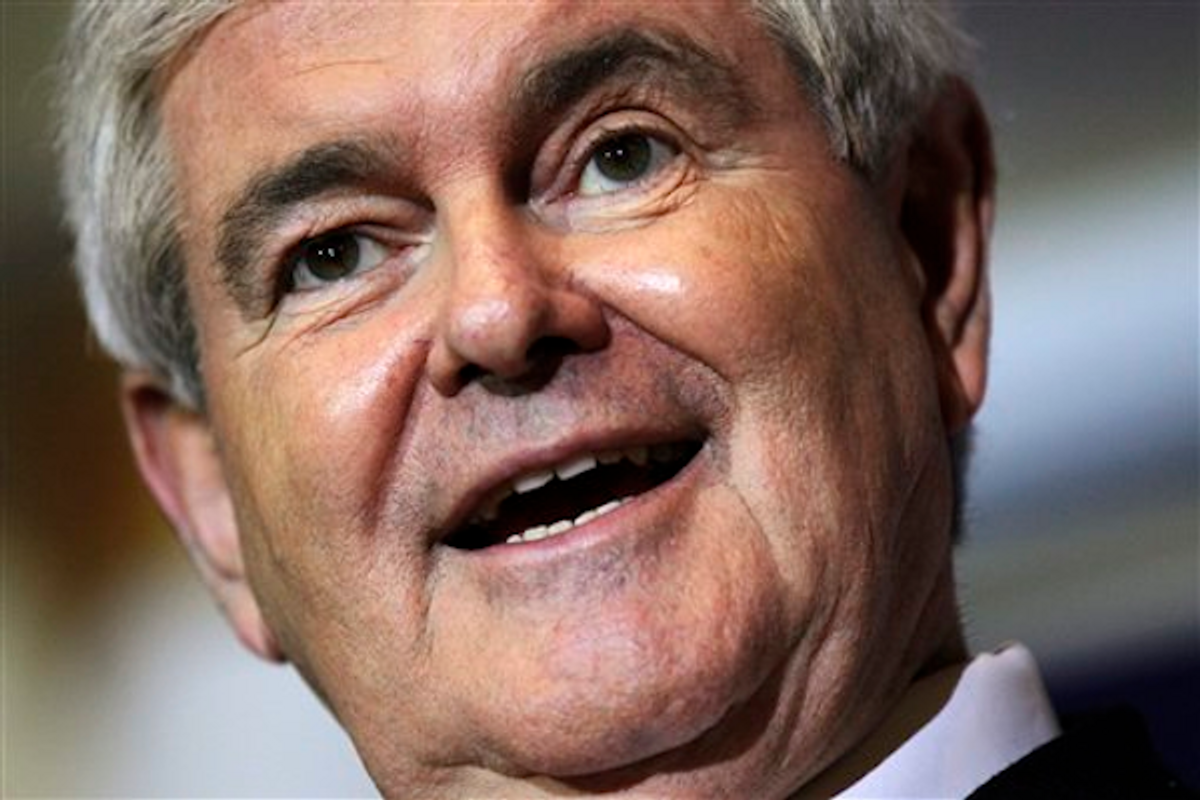 Republicans are worried sick about Newt Gingrich’s ascendance, while Democrats are tickled pink.

Yet no responsible Democrat should be pleased at the prospect that Gingrich could get the GOP nomination. The future of America is too important to accept even a small risk of a Gingrich presidency.

The Republican worry is understandable. “The possibility of Newt Gingrich being our nominee against Barack Obama I think is essentially handling the election over to Obama,” says former Minnesota Governor Tom Pawlenty, a leading GOP conservative. “I think that’s shared by a lot of folks in the Republican party.”

Pawlenty’s views are indeed widely shared in Republican circles. “He’s not a conservative – he’s an opportunist,” says pundit Joe Scarborough, a member of the Republican Class of 1994 who came to Washington under Gingrich’s banner. Gingrich doesn’t “have the temperament, intellectual discipline or ego control to be either a successful nominee or president,” says New York Republican Rep. Peter King, who hasn’t endorsed any candidate. “Basically, Newt can’t control himself.”

Gingrich is “an embarrassment to the party,” says New Jersey Republican Governor Chris Christie, and “was run out of the speakership” on ethics violations. Republican strategist Mike Murphy says “Newt Gingrich could not carry a swing state in the general election if it was made of feathers.”

“Weird” is the word I hear most from Republicans who have worked with him. Scott Klug, a former Republican House member from Wisconsin, who hasn’t endorsed anyone yet, says “Newt has ten ideas a day – two of them are good, six are weird and two are very weird.”

Newt’s latest idea, for example – to colonize the moon – is typically whacky.

The Republican establishment also points to polls showing Gingrich’s supporters to be enthusiastic but his detractors even more fired up. In the latest ABC News/ Washington Post poll, 29 percent view Gingrich favorably while 51 percent have an unfavorable view of him. (Obama, by contrast, draws a 53 percent favorable and 43 percent unfavorable.)

Independents, who will be key to the general election, are especially alarmed by Gingrich.

As they should be. It’s not just Newt’s weirdness. It’s also the stunning hypocrisy. His personal life makes a mockery of his moralistic bromides. He condemns Washington insiders but had a 40-year Washington career that ended with ethic violations. He fulminates against finance yet drew fat checks from Freddie Mac. He poses as a populist but has had a $500,000 revolving charge at Tiffany’s.

And it’s the flagrant irresponsibility of many of his propositions – for example, that presidents are not bound by Supreme Court rulings, that the liberal Ninth Circuit court of appeals should be abolished, that capital gains should not be taxed, that the First Amendment guarantees freedom “of” religion but not “from” religion.

It’s also Gingrich’s eagerness to channel the public’s frustrations into resentments against immigrants, blacks, the poor, Muslims, “liberal elites,” the mainstream media and any other group that’s an easy target of white middle-class and working-class anger.

These are all the hallmarks of a demagogue.

Yet Democratic pundits, political advisers, officials and former officials are salivating over the possibility of a Gingrich candidacy. They agree with key Republicans that Newt would dramatically increase the odds of Obama’s reelection and would also improve the chances of Democrats taking control over the House and retaining control over the Senate.

I warn you. It’s not worth the risk.

Even if the odds that Gingrich as GOP presidential candidate would win the general election are 10 percent, that’s too much of a risk to the nation. No responsible American should accept a 10 percent risk of a President Gingrich.

I’d take a 49 percent odds of a Mitt Romney win – who in my view would make a terrible president – over a 10 percent possibility that Newt Gingrich would become the next president – who would be an unmitigated disaster for America and the world.