The human rights "success" in Libya

As was true in Iraq, those who prematurely claim success cause the war's aftermath - the key part - to be neglected 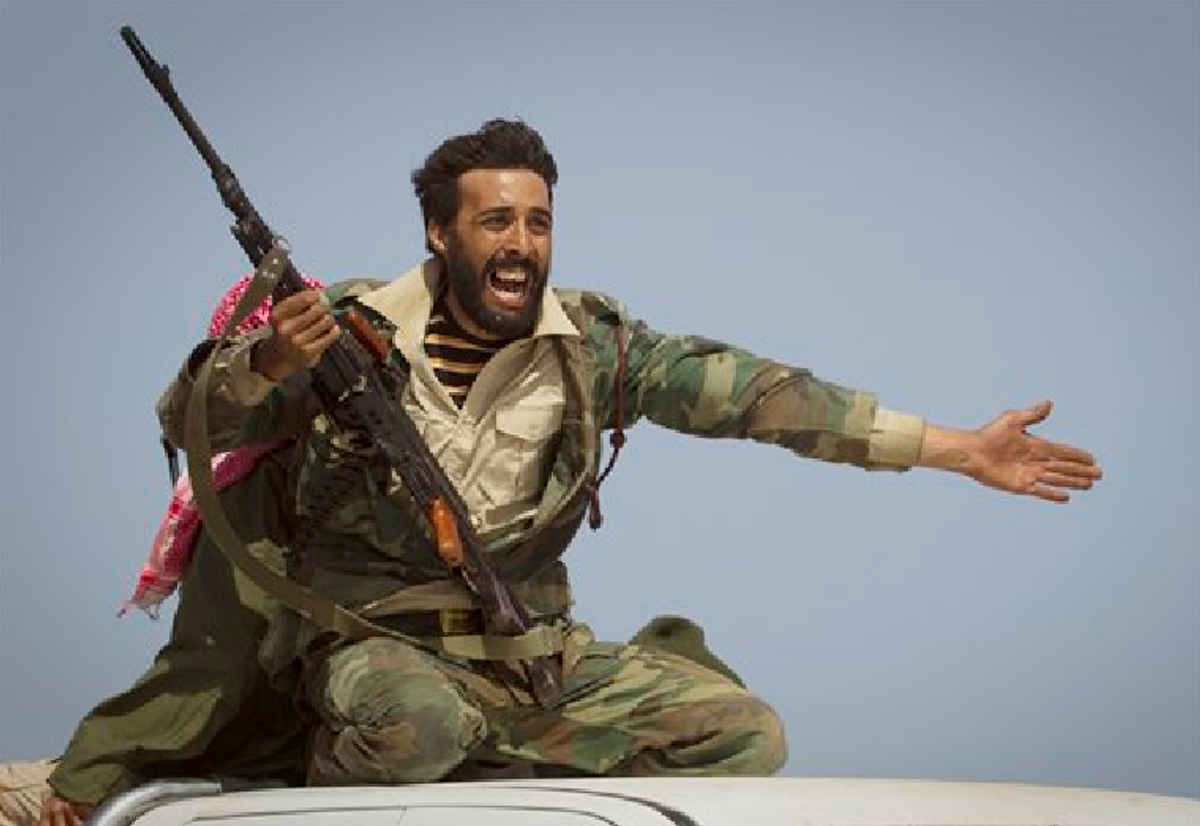 In this March 29, 2011 file photo, a Libyan rebel urges people to leave, as shelling from Gadhafi's forces started landing on the frontline outside of Bin Jawaad, 150 km east of Sirte, central Libya. (AP Photo/Anja Niedringhaus, File)
--

It quickly became ossified conventional wisdom that NATO's war in Libya to aid rebel factions in overthrowing Moammar Gaddafi was a clear human rights victory. But the reality in post-Gaddafi Libya has long been in tension with that claim, and that's true today more so than ever:

Doctors Without Borders is halting work in detention centers in the Libyan city of Misrata because detainees are "tortured and denied urgent medical care," the international aid agency said Thursday.

The agency known by its French acronym MSF said it has treated 115 people with torture-related wounds from interrogation sessions.

Some of the patients treated were tortured again after they were returned to detention centers, according to the agency.

"Patients were brought to us for medical care between interrogation sessions, so that they would be fit for further interrogation. This is unacceptable. Our role is to provide medical care to war casualties and sick detainees, not to repeatedly treat the same patients between torture sessions". . . .

This is not the first report of serious, systematic abuses in Libya. In July, Human Rights Watch accused NATO-backed rebels of widespread looting, arson and abuse of civilians. Throughout the latter part of 2011, there were numerous reports of black migrant workers being detained without charges, tortured and even executed en masse. In October, a U.N. report detailed widespread lawless detentions and torture; the same month, an Amnesty International report documented "a pattern of beatings and ill-treatment of captured al-Gaddafi soldiers, suspected loyalists and alleged mercenaries in western Libya. In some cases," the report continued, "there is clear evidence of torture in order to extract confessions or as a punishment." The incoming President of the U.N. Security Council, South African U.N. Ambassador Baso Sangqu, accused NATO of exceeding the scope of the U.N. Resolution on Libya and called for an investigation into human rights abuses by all sides, including NATO bombers and rebel forces.

The situation is quite redolent of the celebratory claim that Freedom was brought to Iraq by the U.S. invasion and overthrow of Saddam Hussein. Yesterday, the press freedom group Reporters Without Borders released its annual ranking of worldwide press freedom, and the Liberated and Free Iraq came in 152nd place (in 2002, the year before The Liberation, Iraq ranked 130th, albeit with fewer nations ranked). This week, Human Rights Watch issued a report detailing that "Iraq cracked down harshly during 2011 on freedom of expression and assembly by intimidating, beating, and detaining activists, demonstrators, and journalists" and that "Iraq is quickly slipping back into authoritarianism as its security forces abuse protesters, harass journalists, and torture detainees." It further explained that "Iraq's Shiite-led government cracked down harshly on dissent during the past year of Arab Spring uprisings, turning the country into a 'budding police state' as autocratic regimes crumbled elsewhere in the region." Indeed, reports of systematic human rights abuse and torture by the Malaki government have been legion for some time.

Obviously, the Gadaffi and Saddam regimes were horrible human rights abusers. But the point is that one cannot celebrate a human rights success based merely on the invasion and overthrow of a bad regime; it is necessary to know what one has replaced them with. Ironically, those who are the loudest advocates for these wars and then prematurely celebrate the outcome (and themselves) bear significant responsibility for these subsequent abuses: by telling the world that the invasion was a success, it causes the aftermath -- the most important part -- to be neglected. There is nothing noble about invading and bombing a country into regime change if what one ushers in is mass instability along with tyranny and abuse by a different regime: typically one that is much more sympathetic to the invading regime-changers.

That last point underscores the other key lesson from these types of invasions. They are almost always sold by appeal to human rights concerns -- Iraqi babies pulled from incubators and Saddam's rape rooms -- but that is very rarely their actual objective. When the West invokes human rights concerns to justify an attack on a dictator whom it has long tolerated (and often even supported), that is rather compelling evidence that human rights is the packaging for the war, not the goal. The fact that it is not the goal means more than just another war sold deceitfully based on pretexts: it means that human rights concerns will not drive what happens after the invasion is completed. The material interests of the invaders are highly likely to be served, but not the human rights of the people of the invaded country. It is still early in the post-Gaddafi age, but those who supported the war in Libya -- which (like the war in Iraq) included numerous people who did so out of a genuine, well-intentioned desire to see a vile tyrant vanquished -- have a particular responsibility to ensure that the same tyranny is not replicated by the forces supported by the invading armies.

All of these points are particularly worth keeping in mind with the mounting sanctions regimes and other forms of attack aimed at the two countries that just so happen to be those which most thwart the interests of the U.S. and Israel in that region: Iran and Syria (indeed, some of the most vocal supporters of the Libya intervention are now calling on the same to be done in Syria). Obviously, the regimes in both of those countries are serious human rights abusers, but no more so (and, when it comes to Iran, less) than some of the U.S.'s closest allies in that region. Although it will be easy to sell, the U.S. is not interested in regime change in those two countries because of human rights or democracy concerns; its steadfast support for the regimes of Saudi Arabia, Bahrain, and other repressive tyrants conclusively proves that. That's not an argument against opposing the regimes in Syria and Iran, but it is an argument for separating fact from fiction about what the real aims are. Convincing well-intentioned people to support a war in order to depose a wretched tyrant is an easy thing to do -- alas, it's probably too easy to do, since it's usually what leads to great mischief, human suffering, and even more tyranny under a new name.

In that just-released Reporters Without Borders ranking, the United States -- the Land of the Free -- ranked 47th: tied with Romania and Argentina, just ahead of Latvia, and behind El Salvador, Tanzania, and Slovenia, among others. That 47th ranking is 11 spots below where the U.S. finished in 2008. The organization cited the many arrests of journalist covering Occupy Wall Street protests" as most responsible for this decline, and in prior years has cited U.S. treatment of journalists in war zones as well as the imprisonment of journalists at Guantanamo.

Foreign Policy asked nine people, including myself, to assess President Obama's foreign policy after his first three years in office; the analyses can be read here (mine is the last one).