The DoD chief says clearly: once the president accuses a citizen of terrorism, execution without trial is permitted 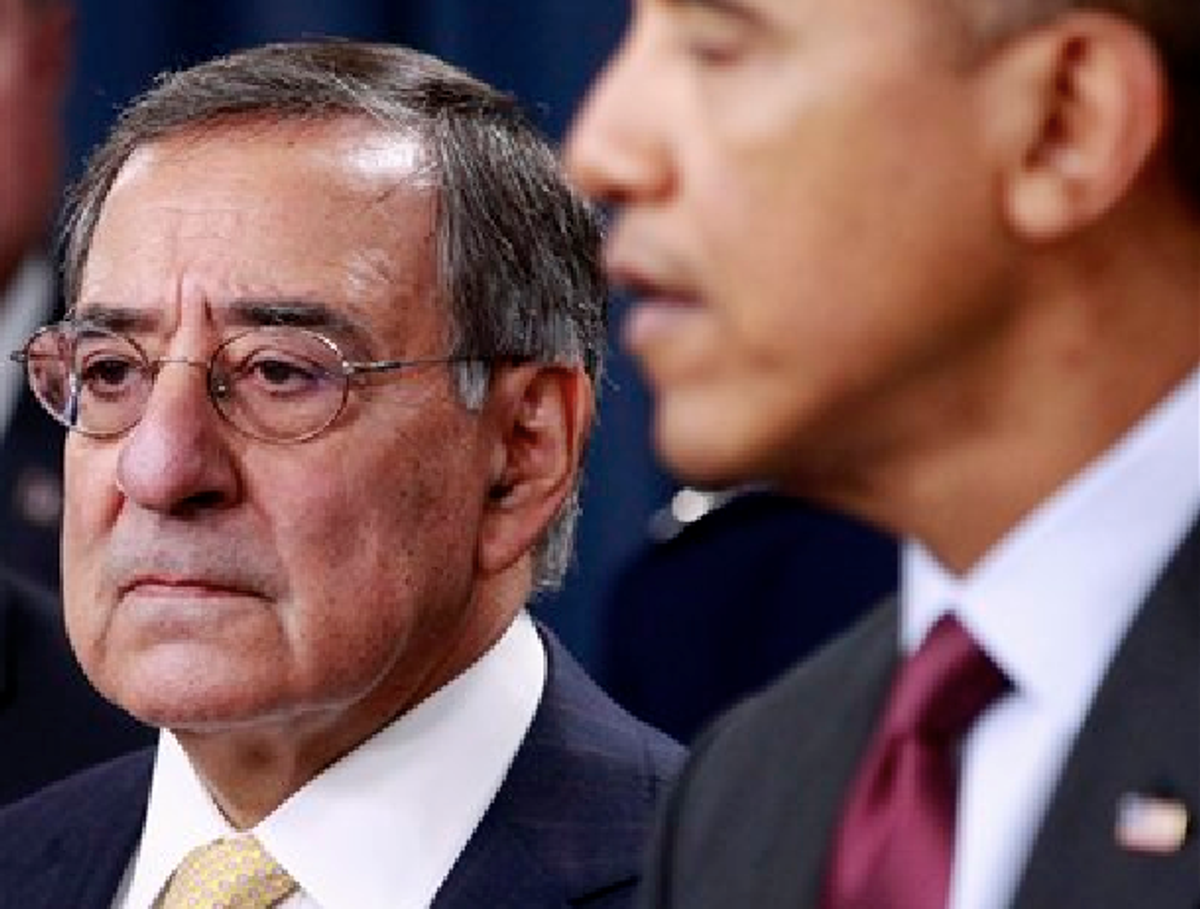 CBS News' Scott Pelley appears to be one of the very few American journalists bothered by, or even interested in, the fact that President Obama has asserted and exercised the power to target U.S. citizens for execution-by-CIA without a shred of due process and far from any battlefield. It was Pelley who deftly interrogated the GOP presidential candidates at a November debate about the propriety of due-process-free assassinations, prompting Newt Gingrich, Mitt Romney, and Michele Bachmann to applaud President Obama for assassinating U.S. citizen Anwar Awlaki (just as Rick Perry, Dick and Liz Cheney, and Bill Kristol had done). Last night, Pelley did the same when he interviewed Defense Secretary and former CIA chief Leon Panetta on 60 Minutes. It's well worth watching this three-minute clip because, although Panetta doesn't say much that is new (he simply asserts the standard slogans and unproven assertions that Obama defenders on this topic always assert), watching a top Obama official, under decent questioning, defend the power to target U.S. citizens for assassination viscerally conveys the rigidly authoritarian mindset driving all of this:

Panetta's answers are suffused with dubious and even factually false claims. It is, for instance, false that the U.S. provides due process to everyone apprehended for Terrorism. To the contrary, the Obama administration has been holding dozens of Terrorism suspects without any charges for years, and President Obama just signed into law a bill codifying the power of indefinite detention for accused Terrorists. But even if it were true that all Terrorism suspects who are detained were entitled to receive due process, that merely underscores how warped it is to assert the power to target them for execution without due process. After all, how can it be that the Government must prove guilt merely to imprison Terrorists but not to execute them?

But this is one of the towering, unanswerable hypocrisies of Democratic Party politics. The very same faction that pretended for years to be so distraught by Bush's mere eavesdropping on and detention of accused Terrorists without due process is now perfectly content to have their own President kill accused Terrorists without due process, even when those targeted are their fellow citizens: obviously a far more Draconian and permanent abuse than eavesdropping or detention (identically, the very same faction that objected to Bush's radical whole-world-is-a-Battlefield theory now must embrace exactly that theory to justify how someone riding in a car, or sitting at home, or sleeping in his bed, in a country where no war is declared, is "on a battlefield" at the time the CIA ends his life).

It is equally false, and independently both misleading and perverse, for Panetta to assert that a citizen in Awlaki's position could come to the U.S. to assert his due process rights. For one thing, Awlaki was never charged or indicted for anything in the U.S. -- he was simply executed without any charges (the Obama administration, after trying to kill him, reportedly "considered" charging him with crimes at one point but never did) -- and thus, there was nothing to which he could "turn himself" in even if he wanted to.

Even worse, President Obama's hit list of those he approves for assassination is completely secret; we only learned that Awlaki was being targeted because someone happened to leak that fact to Dana Priest. The way the process normally works, as Reuters described it, is that targeted Americans are selected "by a secretive panel of senior government officials, which then informs the president of its decisions"; moreover, "there is no public record of the operations or decisions of the panel" nor "any law establishing its existence or setting out the rules by which it is supposed to operate." So, absent a fortuitous leak (acts for which the Obama administration is vindictively doling out the most severe punishment), it would be impossible for American citizens to know that they've been selected for execution by President Obama (and thus obviously impossible to assert one's due process rights to stop it).

Worse still, if a judicial proceeding is commenced by a targeted American seeking to put a halt to the assassination attempt in the absence of a trial -- as Awlaki's father did, with the help of the ACLU and CCR, on behalf of his son -- then the Obama DOJ will insist that the reasons for the assassination are "state secrets" and cannot be judicially examined, and independently, that such matters are for the President alone to decide and courts thus have no role to play in interfering with such decisions (see POINT II). American courts, largely deferential to claims of presidential secrecy and authority in the post-9/11 era, almost reflexively accept such claims. In other words, if a targeted American tries to assert these due process rights, the Obama administration will go into court and take exactly the opposite position of the one Panetta is claiming here: namely, that the person has no rights to have a court interfere in the President's assassination order.

So for so many reasons, Panetta's claim is utterly false: American citizens secretely targeted by President Obama for execution have no means of obtaining due process even in the unlikely case that they learn they have been so targeted. And this is all independent of Panetta's warped notion that an American has to be on U.S. soil to claim constitutional protections, a wholesale rejection of well-settled Constitutional law that Americans have the right to travel abroad and, when they do, they retain their Constitutional rights against the U.S. government even when on foreign soil. As the Supreme Court put it in 1956, specifically discussing the requirement that a citizen be given a trial before punishment can be doled out (emphasis added):

At the beginning, we reject the idea that, when the United States acts against citizens abroad, it can do so free of the Bill of Rights. The United States is entirely a creature of the Constitution.  Its power and authority have no other source. It can only act in accordance with all the limitations imposed by the Constitution. When the Government reaches out to punish a citizen who is abroad, the shield which the Bill of Rights and other parts of the Constitution provide to protect his life and liberty should not be stripped away just because he happens to be in another land. This is not a novel concept. To the contrary, it is as old as government.

But the final point is the most important and revealing of all: Panetta's whole case rests on simply asserting, without proving, that Awlaki was a Terrorist trying to "kill Americans." That, of course, is precisely what is in dispute: actual Yemen experts have long questioned whether Awlaki had any operational role at all in Al Qaeda (as opposed to a role as its advocate, which is clearly protected free speech). No evidence has been publicly presented that Awlaki had any such role. We simply have the untested, unverified accusations of government officials, such as Leon Panetta, that he is guilty: in other words, we have nothing but decrees of guilt. The U.S. Constitution, first and foremost, was designed to prohibit the doling out of punishments based on government accusations untested and unproven in a court of law; for those who doubt that, just read the relevant provisions ("No Person shall be convicted of Treason unless on the Testimony of two Witnesses to the same overt Act, or on Confession in open Court"; "No person shall be deprived of life, liberty, or property, without due process of law").

But as I wrote the other day, "the U.S. really is a society that simply no longer believes in due process: once the defining feature of American freedom that is now scorned as some sort of fringe, radical, academic doctrine." Instead:

Supporters of both political parties endorse, or at least tolerate, all manner of government punishment without so much as the pretense of a trial, based solely on government accusation: imprisonment for life, renditions to other countries, even assassinations of their fellow citizens. Simply uttering the word Terrorist, without proving it, is sufficient.

Here we have the U.S. Defense Secretary, life-long Democrat Leon Panetta, telling you as clearly as he can that this is exactly the operating premise of the administration in which he serves: once the President accuses you of being a Terrorist, a decision made in secert and with no checks or due process, we can do anything we want to you, including executing you wherever we find you. It's hard to know what's more extraordinary: that he feels so comfortable saying this right out in the open, or that so few people seem to mind.

ABC News' Jake Tapper pressed White House spokesman Jay Carney back in October about the evidence the administration possesses showing Awlaki's guilt, and the same authoritarian decree issued: we have said he's a Terrorist and that is all that is necessary.