"I have your results"

Three months into a draining clinical trial, the doctor called with news. Was it working -- or not? 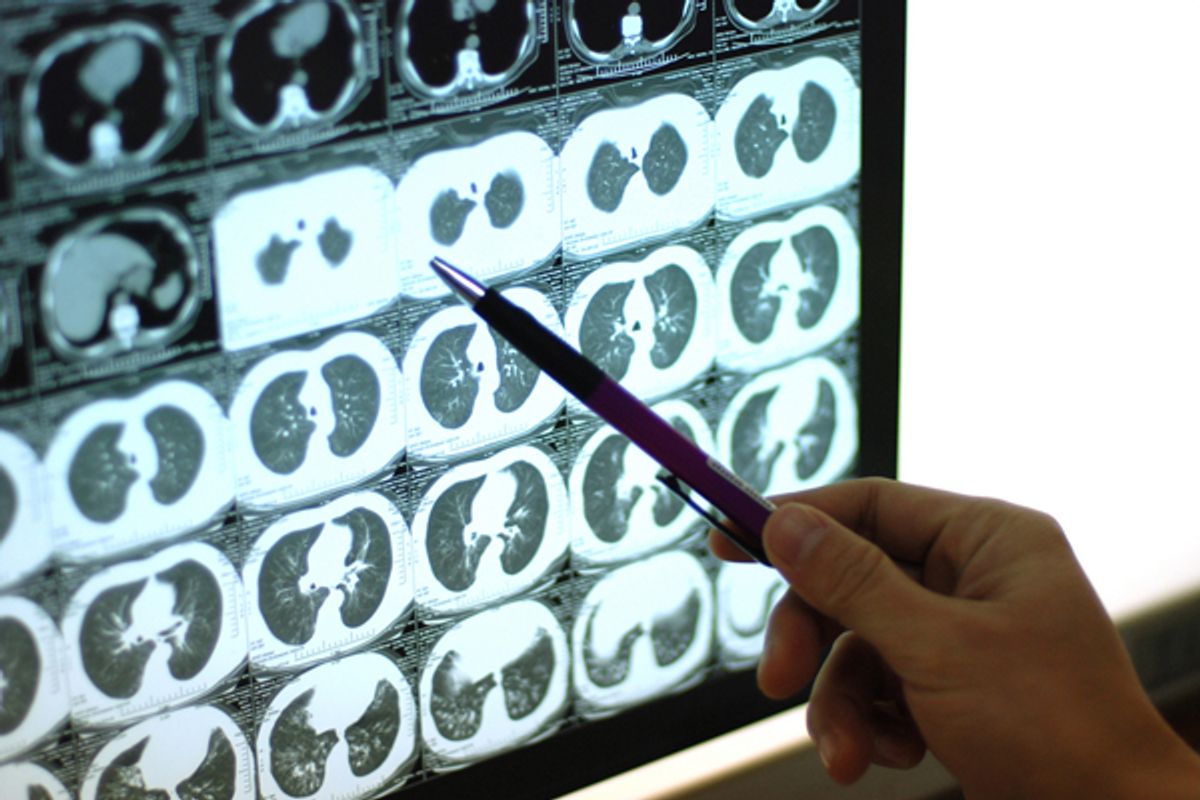 I had just settled into a chair for my regular Tuesday night cancer support group when I got the call. An unfamiliar number. A split second of wondering whether or not to answer. And then my doctor, calling from his own phone to say, "I have your results."

People with metastatic, Stage 4 melanoma rarely get happy endings. They usually just get endings. The odds of surviving five years once the cancer has spread into your lungs and bloodstream are generally ballparked at around 10 percent. So when I entered a Phase I immunotherapy clinical trial in October, I knew the whole enterprise had the pungent aroma of Last Ditch. My doctors said brightly that my relative youth and good health made me "an ideal candidate." They said that the drug combination I'd be on – the newly approved Ipilimumab and the experimental, sexily named MDX-1106 – were highly "promising." And because it was a trial, Bristol-Myers Squibb would essentially foot the bill. They had also just told me that the malignant cancer I had surgery for in 2010 had broken off; there was now a tumor in my lung and another one under the flesh of my back. In the stark absence of other options, I signed a 27-page consent form alerting me to potential side effects from diarrhea to hepatitis and even death. And with that, I started on a protocol that I hoped wouldn't kill me before the cancer did.

Every three weeks, I spend a day on the fourth floor at Memorial Sloan-Kettering, hooked up to an IV as strange new drugs drip into my system. Every week, I am monitored and quizzed and examined and have truly ludicrous amounts of blood drawn. The external effects of the regimen presented themselves early on – crushing exhaustion, an itchy rash, dizzy spells – but I would have to wait three months, until January, to learn whether the drug combo was doing any real work on my cancer. The fact that the lump on my back subsided after the very first treatment was encouraging enough to get my doctor enthusing, but having been declared "cancer free" once before, I knew to temper optimism with caution. Especially because these are uncharted waters.

Immunotherapy, my doctor says, is like religion. "For years," he tells me, "we just had to go on faith." It differs radically from chemo in that it coaxes your body's own defenses to attack disease – and then, astonishingly, to continue defending the body after treatment has ended. It's still considered a new frontier in cancer care, and at first glance, it's easy to see why. Its main forerunner is Interleukin-2, an immune-system treatment for patients with metastatic cancer that is infrequently used and only sporadically effective. And one of the immunotherapy drugs I'm on, Ipilimumab, won FDA approval last year with a mere 30 percent success rate.

Yet the way we treat – and try to head off – cancer is changing radically. Look no further than the rise of the vaccine Gardasil. Since its approval in 2006, it has been routinely given to girls to help ward off HPV, which can cause cervical cancer. And just last week, the Roswell Park Cancer Institute in Buffalo launched a Phase 1 clinical trial for a vaccine researchers say "harnesses the power of the body's immune system to kill cancer cells." Imagine a world in which preventing and treating cancer didn't automatically mean harsh protocols like chemo, radiation or interferon. Imagine something that might someday be as simple as getting a shot. It's coming. Because as my clinical trial nurse puts it, "It's the immune system, stupid."

That dramatic day, however, is still a long way off. In the meantime, if the other 10 people doing this trial at MSKCC are anything like me, they've been dealing with scarred veins, side effects  and nagging uncertainty. Science may be moving at a breathtaking clip, but when you've got a cancer that often kills within a year, it simply may not be moving quickly enough for all of us.

That's why when my doctor said he had my results, I wasn't sure I wanted to know. I had been at MSKCC just that morning, guzzling sickly sweet, room-temperature liquid and holding my breath inside the CT scan machine. After three months of infusions, I'd now know whether that spot in my lung was growing or shrinking, whether my cancer was accelerating or diminishing. That night, as I stood in the hall outside my support group, I held my breath again. And then my doctor told me, "I have good news."

"The tumor in your lungs is gone," he continued, "and the one on your back has receded completely." I don't know a lot of fancy medical jargon, but I do know that "good news," "gone" and "receded completely" are, for a person with distant metastases, downright extraordinary.

Two days later, I was back at Sloan-Kettering, awaiting my next infusion. "I know you can't reveal much," I'd asked, "but can you say anything about how the other people in the trial are doing?" I may be thriving, but if it turned out other patients were dropping like flies, I'd hold off on popping a bottle of Dom.

"We had two other patients who had scans this week," the doctor said. "Both of their tumors have shrunk significantly. But you're at 100 percent, so that makes you our valedictorian." And while it's nice to be valedictorian, what it really means to a team of researchers -- and Bristol-Myers Squibb -- is that I am solid results.

This isn't a happy ending. People with Stage 4 cancer don't really get those. This isn't even an ending. I'm still only halfway through a trial that is kicking my ass. After I complete it in March, I will be on maintenance treatment every three months for the next two years. I will have skin checks and MRIs and scans for the rest of my life. I will live with the reality that melanoma, as I have already learned firsthand, makes more comebacks than Cher. And nobody really knows for sure what the long-term effects of my treatment are, because nobody's ever done this particular course before. I'm hoping they include super strength and sexual charisma, but liver damage seems likelier.

Yet right now, I have hope that the middle-aged woman in Treatment Suite 26, the one whose elderly father sits by her side as they watch "Dr. Phil" together, is getting better. That the tall, 20-something guy in the Superman T-shirt, a genial fellow who tells me the cancer has already come back twice before, is too. And it's a humbling and fantastic thing to consider that, someday, because of what the sick and the healers are doing on the fourth floor, you might get to survive, too.

When I went in for my last treatment, my doctor asked if I wanted to see my scans. You bet I did. He sidled over to a monitor in the corner of the exam room and brought up an image dated Oct. 6, 2011. "This is your lung," he said. "See that there? That blob? That's the tumor." Then he brought up another image right next to it. "This is you now." It looked just the other one, but with one significant difference. No blob. He did the same for the picture of my back. "Here's the cancer," he said. There was a green arrow pointing to it, a flag that some technician added three months ago, a little signpost of malignancy. "And this," he said, double-clicking on a different picture, "is you now. Nothing." Nothing has never looked so beautiful.

"Yeah, it is," he said, beaming. "It's more fun when it works." I looked at the monitor and smiled too. Within those weird, abstract images I could see so much, so clearly. I could see sunsets and birthday parties; I could see snowmen and sand castles. And I thought, yup, it's the best fun ever. It's even better than a happy ending. It's a future.