Under Occupy DC's tent of dreams

The protesters wait out the police and win a reprieve 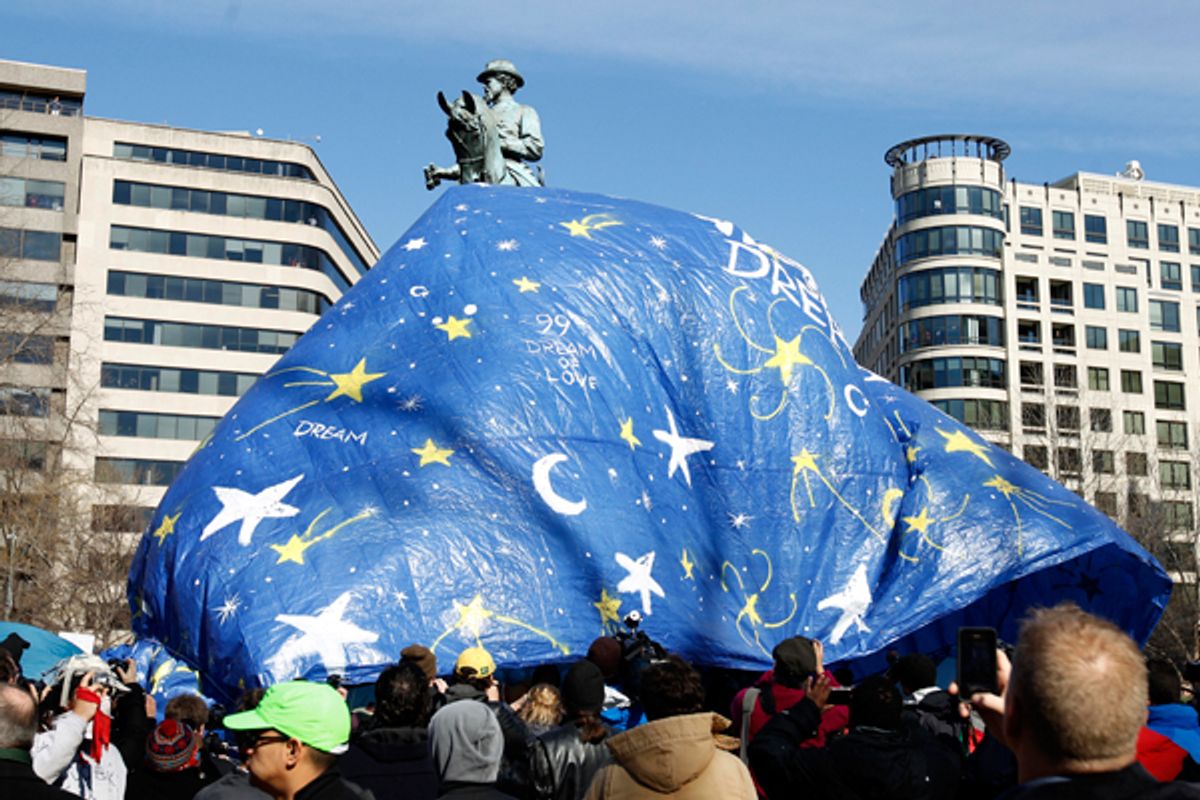 The Tent of Dreams (Reuters/Kevin Lamarque)
--

In 122 days OccupyDC had managed to change the nation's capital. The question on Monday night was, Would they make it to 123?

As if determined to vindicate the occupation movement's every argument about the power of the 1 percent , Rep. Darrell Issa, the richest man in Congress, had taken the greatest offense at their use of public space in the heart of the city to broadcast their egalitarian message. Last week, the California Republican called a hearing to browbeat the flak-catchers of the federal bureaucracy to enforce a ban on camping in public places. And on Friday he got his way. The Park Police posted a yellow notice that come Monday at noon the demonstrators would all be subject to arrest for sleeping in the park.

In response, an ad hoc committee of about 15 occupiers got together last Friday night to talk about what they wanted to do. "We wanted a confrontation on our terms," said Ricky Lehner, a 23-year-old man from Florida who has made the camp his home since October.

"We know the Park Police are very protective of the statue," said Travis McArthur, a researcher at a well-known liberal nonprofit, referring to the mounted figure of Maj. Gen. James McPherson, a Union hero in the Civil War, that stands in the center of the square. "Since I came here, I've come to think of him as our patron saint, our protector."

If the authorities were going to take away their tents, they decided, they would have to do so on a grand scale. So when the Park Police deadline arrived at noon on Monday, they struck. As the square was thronged with cameramen and spectators looking for confrontation, a couple of young men mounted the statue and the rest hauled out a huge blue nylon dropcloth, which they hoisted up and over McPherson's shoulders. They secured the flaps to the little iron fence around the statue so everyone could see the yellow and white stars (and a Star of David). They dubbed it, "The Tent of Dreams."

"The idea was let us sleep so we can dream of  better world," said McArthur, and all around the tent sprouted witty indignant signs: "I dream of First Amendment Rights" and  "I dream of taxation on the 1%" and "No sleep, no justice," and "We the non-corporate people."

It was the inhabitants of this tent city who had changed Washington. They were hanging around Monday evening happily waiting for the police.

There was Michael, once an African-American kid who went from Alaska to Iraq as a gung-ho warrior and came back from the war zone a happy-go-lucky leftist with a taste for confronting the right-wing media. There was Katie, graduate of a private school in northwest Washington who regularly facilitated the occupation's general assemblies and learned to try to trust the judgment of the group. There was Sam who came from Virginia with a political science degree in hand, yarmulke on his head, and unshakable interest in non-hierarchical politics. There was Vic, who had traveled the country for the sake of her political activism and found renewed inspiration from a man named Charles Jones, who desegregated a lunch counter in South Carolina long before any of them were born. And there were a few dozen others just like them -- and some not at all like them at all -- who had claimed a patch of grass in McPherson Square on Oct. 1 and called themselves OccupyDC. There was hardly a professional reformer among them.

It was their impromptu audacity (not the president's more scripted version) that changed the tone of Washington politics. When these young people first pitched their tents and started a Twitter feed, the chatter in the tasteful restaurants around the square, the discussions in the glassy palaces of K Street, the conversations in the stately editorial offices of the Washington Post one block up 15thStreet, and the debates on Capitol Hill revolved almost entirely around austerity and budget cutting. Few talked about the unpleasant subject of the nation's startling inequality of wealth or the relentless domination of the political system by corporations and moneyed interests. Four months later, the capital's discourse was different. The power of the proverbial 1 percent was not yet the subject of negotiation but it had become at least a fit topic of discussion. Even the timid president discovered he might gain credibility by speaking out more firmly about fairness.

"You changed the debate," said Carey Campbell, chairman of the Green Party of Virginia at the general assembly on Monday evening . "It was your courage, your creativity."

The people of OccupyDC hardly deserved all the credit for these developments but surely they deserved some. Their occupation of public space had lasted longer than that of their more sophisticated friends in New York's Zuccotti Park and their more radical comrades in Oakland, Calif. They accommodated the homeless more successfully than their brethren in Philadelphia and they coexisted more effectively with the local police and politicos than the protesters in Boston.

They did not plan to go quietly. As a crowd of 100 people listened at the general assembly, the sustainability committee smuggled in a small pine tree and planted it in the middle of square — another violation of the rules — for the TV cameras and dedicated it to "to all who would crush this movement."

A member of the medical committee exhorted the people sleeping in the park to get rest and be ready for the police. "Stay hydrated and don't give them an excuse to hit you in the head," he said. "I don't want to be cleaning up your blood."

The most common rumor was that the police would turn off the street lights and move in after 11 p.m. so as not to make the evening news. The mood was cheerful and expectant but hardly confrontational. Eleven o'clock came and went with not a sign of the police.

"Where are the cops when you need them?" a man quipped.

"There's apples and oranges at the food table," someone said around midnight. "Everybody should eat some."

They played Scrabble and sang along to a strummed guitar. While many straggled off to home or their tents, a small remnant remained under the tent of dreams smoking hand-rolled cigarettes — the legal kind — talking and arguing among themselves. And in the dawn's early light on Day 123 of the OccupyDC, the tent of dreams was still there. For whatever reason the Park Police had chosen not to act. The end of OccupyDC in McPherson is probably coming soon but for the occupiers to live to see another day was another small and improbable victory.