Romney's inevitable, but Newt's far-right backers are ready to destroy the Massachusetts moderate to win in 2016 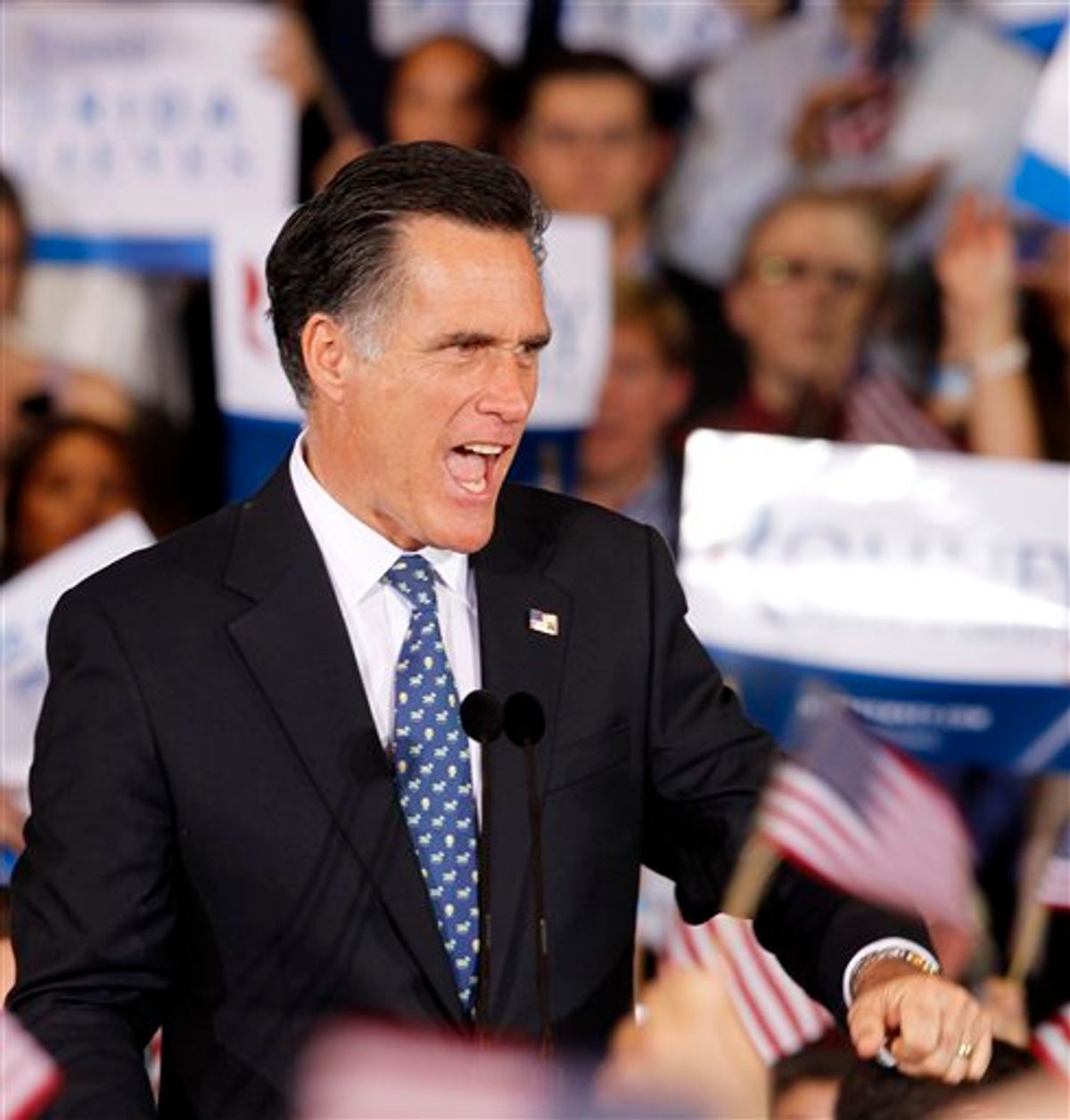 Mitt Romney won the most important Republican presidential primary to date, taking Florida with 46 percent of the vote, to 32 for Newt Gingrich. But Gingrich vows to soldier on, and I expect him to. This is a hate-off.

The Republican Party is split between its two personalities: Predatory finance capital and angry white male faux-populism. That's trouble enough. Add to that Gingrich's fury at Romney's bottomless pockets full of nasty ads, and this is a party headed for a crack-up.

November's still a long way away, but it's hard to imagine President Obama losing Florida after the slime-fest we've just witnessed. Both Gingrich and Romney are seeing their negatives go up as the campaign goes on, while Obama's approval rating continues to climb. I think the president is largely responsible for his ratings rise, because he's brought the fight to the GOP since the debt-ceiling debacle.

But one thing Romney clearly had going for him when the race began, in the face of Tea Party suspicion about his conservative credentials, was that voters viewed him benignly. Between revelations about his tax rate plus his Bain Capital work, and Gingrich's relentless attacks, Romney's losing the main thing he had going for him, his generic affability. In November, polls showed Romney beating Obama by 13 points in Florida; recent polls give Obama the edge, 44 to 36 percent. If the hate-off continues, it will hurt him in November, and not just in Florida.

Romney pretends to disagree. "A competitive primary does not divide us, it prepares us, and we will win," he told the cheering crowd of Florida supporters Tuesday night. Deep-pockets Mitt also claimed he was running "a people's campaign," even though his anti-Gingrich ads outnumbered pro-Gingrich ads by a staggering 13,000 to 200 in Florida.

So does Gingrich have a prayer? Not really. But he's still picking up the remnants of the Tea Party brigade. Rick Perry, of course, endorsed him right away, Herman Cain (hilariously) joined him this week. And just as she did in South Carolina, Sarah Palin held back from formally endorsing Gingrich, but again told voters they ought to vote for him in this race, just to keep the contest going (and bug liberals, as though liberals wouldn't be elated to see Obama run against Newt). What's she up to? I think Palin and other far-right Gingrich supporters would be thrilled to bloody Romney and see him lose to Obama. That would let them argue that GOP moderates are electoral poison, and only a sharp turn right will bring the party back from the dead. In fact, if Romney is the nominee and loses to Obama, it will likely be because he stiffed independents and moderates to make that sharp turn right, turning his back on climate change and his own healthcare reform, as well as running to Gingrich's right on immigration with his pledge to veto the DREAM act.

No matter what Gingrich or Palin does, Romney will also be a tough sell in November, because he's so undeniably Mr. 1 Percent (or I guess Mr. .0006 percent), the face of the forces of wealth Americans are beginning to scowl at. In his victory speech Tuesday he took a moment to recall that Obama promised that if he didn't improve the economy, voters should make him a one-term president, and he declared, "Well, I'm here to collect." It wasn't quite "I like to be able to fire people," but it did sound like the landlord or the bill collector at the door. Romney continues to seem like he's doing his best imitation of a human being, but he hasn't quite mastered it yet.

But Gingrich's rambling, grandiose speech went off the rails. The crowd waved signs saying "46 states to go," and their man told them “we are going to contest every place and we are going to win.” He never actually "conceded" to Romney; the speech was a long, bizarre peroration on the things he'd do his first day in office, when he's sworn in as president, which a reality-based candidate would know will never happen. It was mostly garden-variety GOP stuff – repeal Obamacare, Dodd-Frank and Sarbanes-Oxley. But it also included a wet kiss for Sheldon Adelson -- a promise "to instruct the State Department, that day, to open the embassy in Jerusalem" – plus a generic red-meat promise to repeal "every anti-religious act of the Obama administration, as of that moment." Even his daughter, Jackie Gingrich Cushman, wore a frozen, pained smile as the speech wore on; the crowd's clapping ebbed with every delusional promise.

The night hit bottom, though, when Gingrich's former communications director Rick Tyler, now running his friendly super PAC, told Rachel Maddow and Rev. Al Sharpton on MSNBC that the Democrats were the party that aborted black babies, and that African-Americans live in housing projects and collect welfare checks, and need the movie "Red Tails" because they lack role models – as though that guy in the White House isn't a black role model, one of millions. It was the GOP id unleashed.

If you watch television for 30 seconds you'll hear pundits (including me) grasp to compare the ongoing 2012 GOP primary to the long 2008 Democratic contest. But there's really no comparison. The 2008 Clinton-Obama showdown had its bitter moments, but nothing like the unrelenting nastiness of this race. And people who argued that the extended contest was pumping up voter interest in the November election and building and mobilizing the Democratic base turned out to be right.

The GOP hate-off isn't having that effect: Turnout in the first three 2012 contests was flat, and in Florida it was down from 2008. Given the conventional MSM wisdom that the Tea Party-dominated Republican base is some newly invigorated electoral powerhouse that can't wait to get to the polls to turn out Barack Hussein Obama, you'd expect a whole lot more people to be casting votes as the 2012 campaign gets into gear. But then the MSM has taken the Tea Party way too seriously from the start. Still, it's hard for any of us to read the new GOP. There will be a rote quality to the coverage from here on out, because Romney's nomination is almost certain. Yet we still have to pay attention to see how far the right wing will go to destroy the former Massachusetts moderate who has indulged their every demand – except that he leave the race.