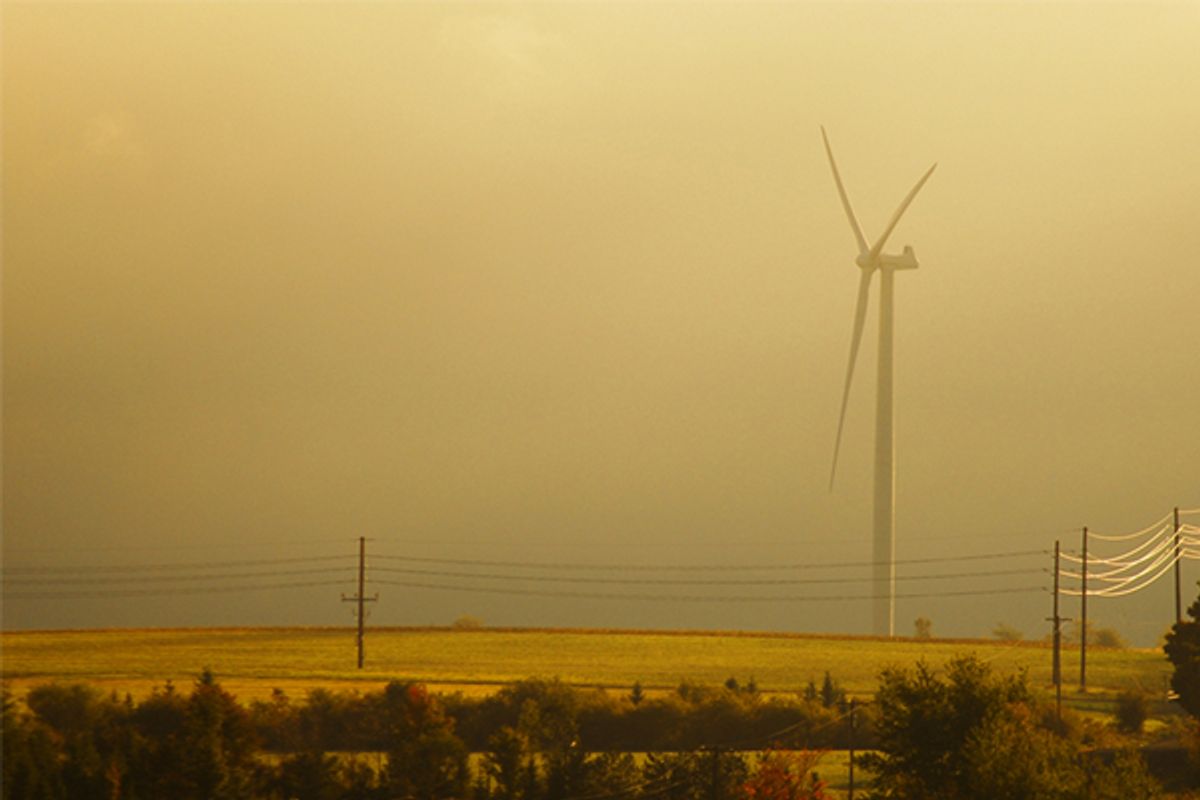 In telling the story of a small-town political fight over wind power, Laura Israel's fascinating documentary "Windfall" at first seems like another entry in the long laundry list of post-"Inconvenient Truth" doomsayer environmental films. Indeed, "Windfall" has some of the rural, homespun feeling of Josh Fox's Oscar-nominated "Gasland," which helped ignite a national debate over the natural-gas extraction method known as fracking. Israel's film also offers a direct riposte to Bill Haney's "The Last Mountain," in which Robert F. Kennedy Jr. is seen promoting wind power as a clean alternative to the dirty and destructive combination of mountaintop-removal coal mining and coal-generated electricity.

Viewed through a long lens, "Windfall" is about much more than the hidden costs and unexpected side effects of wind-power generation, or about a citizens' uprising in the tiny town of Meredith, N.Y., in the Catskill region 150 or so miles northwest of Manhattan. (Mind you, both are gripping stories.) It's about the American tendency -- and very likely the human tendency -- to look for magic-bullet solutions to complicated social and economic problems, where none are available. It's a microcosmic version of the political divisions -- between left and right, environmentalists and free-marketers, corporations and citizens -- that have virtually paralyzed our republic. It's a reminder that whenever a virtually unregulated industry (as in this case) offers capitalists a chance to defraud the little guy and make a bundle, they'll do it. It's a tantalizing case study that suggests ordinary people still have the power to steer a course between faceless bureaucracies and greedy capitalists, but only just -- and only if they can find a way to overcome their differences and work together.

In the abstract, wind power sounds like a good thing to nearly everybody. It relies on an essentially infinite resource, carries little or none of the obvious environmental downside of coal or oil, and presents no Fukushima-style doomsday scenario. Wind generation has become a major focus of venture capital; Israel includes video of a hearing a few years ago at which T. Boone Pickens told a congressional committee that he could imagine, in the relatively short term, 20 to 25 percent of the country's electricity demand being fulfilled by wind and other renewables. I have no way to evaluate that claim, but the experts Israel consults in the film think it's hokum. Given the inherently inconstant nature of wind, they argue, it's not a stable or permanent solution to our energy crisis, and is unlikely ever to amount to more than a drop in the bucket.

Setting aside the discussion of whether it's worthwhile to pursue wind power in the first place -- and we shouldn't really set that aside -- there might be locations in the Great Plains states, the Southwest and the high western deserts where wind farms, even on the enormous scale imagined by Pickens, would do no great harm. But as people in Meredith and numerous other communities in the wind-friendly rural Northeast and Great Lakes region have discovered, living anywhere near those gargantuan wind-harnessing engines is quite a different matter. These days, the typical industrial wind turbine is around 400 feet high -- the height of a 40-story building, or twice the length of a jumbo jet. The blades alone can weigh upward of 35 tons, and the entire assembly anywhere from 150 to 400 tons (resting on a platform of concrete and rebar, which itself may be 30 feet deep and weigh several hundred tons). It's an enormous construction site, culminating in a high-voltage electrical device, that emits a 24/7 whoppa-whoppa-whoppa noise and incessant low-frequency vibration, and is topped with a brilliant flashing light. By daylight, there's the nightmarish strobe effect -- the vast rotating shadow that falls across an entire neighborhood when the turbine is between you and the sun. (While the question of whether it's actually unhealthful to live near a turbine is unresolved, it's definitely unpleasant.) If your neighbor put one up in her backyard without asking permission, how would you feel?

As it happens, I have a personal interest in the events and location of "Windfall," because I spend summers in a town just a few miles from Meredith. But nothing about the town or its surrounding area (in Delaware County, N.Y., one of the poorest and least populated counties in the Northeast) is untypical of rural America. Meredith has a mix of longtime residents and big-city emigrants, and its longtime dairy-farm economy has largely collapsed in recent years, partly replaced by an unstable mixture of tourist-oriented businesses, craft initiatives and boutique organic farming. These social tensions came to the fore, predictably, during the wind-power debate, with the major landowners and dairy farmers on one side -- hoping for the rather skimpy royalties paid by the corporate investors in wind -- and many "recent" New York City arrivals, convinced that the region's economic future depends on its unspoiled landscapes, on the other. (I use the scare quotes because anyone who's lived in Delaware County less than 30 years is often viewed as a newcomer.)

People on both sides of the issue in Meredith assumed at first that the anti-turbine forces were an elitist minority, partly because the town board had always been dominated by the same landowning families, and partly because wind-power companies had signed people up to secret agreements that forbade them from discussing anything about the relationship. What ensued was a fascinating lesson in democracy (and a version of the same lesson the Tea Party and its supporters may learn later this year). After 826 people -- more than half of Meredith's total population -- signed a petition opposing the town board's pro-development policy on wind turbines, it turned out that the people who thought of themselves as the "real" residents were in the minority, and the jig was up for the wind industry in this one tiny corner of America. Yet as one newly elected board member reflects at the end of the film, nobody came out of this fight feeling good. A formerly harmonious community is now bitterly divided, and the Mitt Romney-style venture capitalists of wind power will just move on to the next town and sell their pseudo-green poisoned chalice to somebody else.

"Windfall" opens this week at the Quad Cinema in New York and the Facets Cinémathèque in Chicago. It opens Feb. 9 at the Art House Cinema 502 in Ogden, Utah, Feb. 24 at the Clinton Street Theater in Portland, Ore., and March 2 at the Northwest Film Forum in Seattle, with other cities and festival screenings to follow. It's also available on-demand from cable, satellite and online providers, including Amazon, iTunes and VUDU.