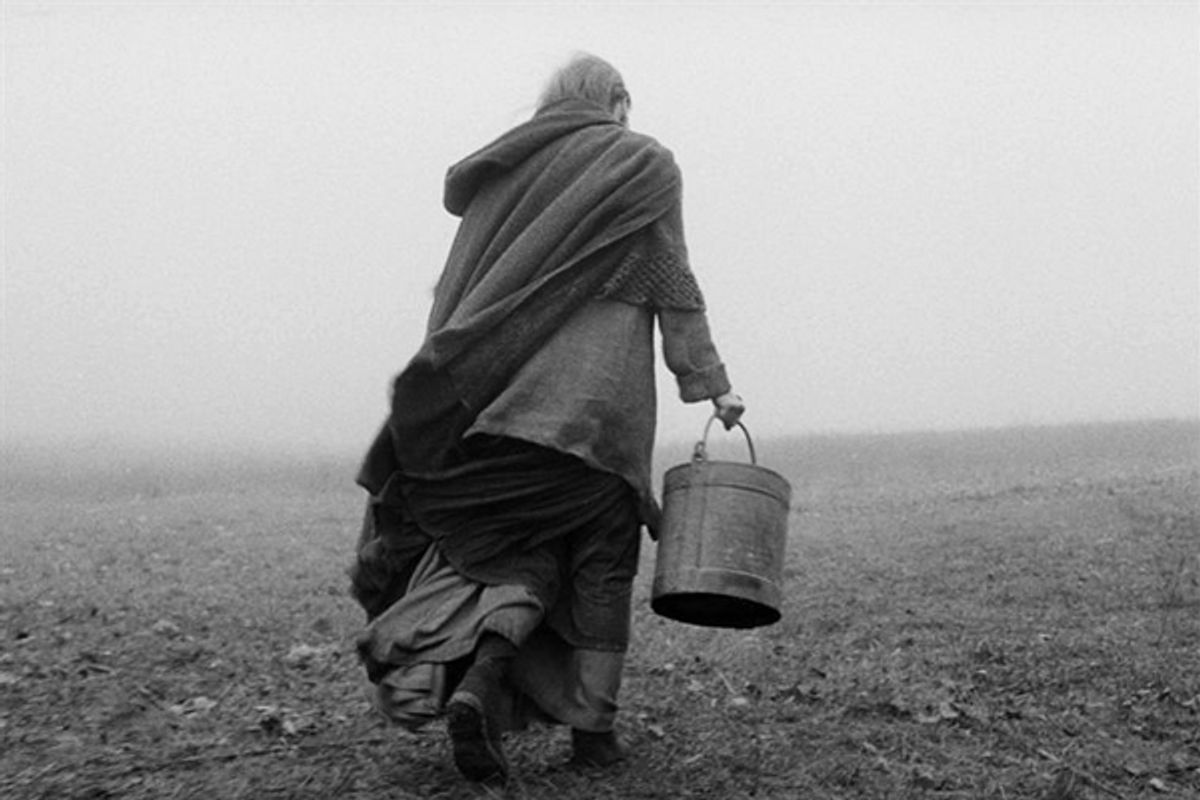 So Hungarian director Béla Tarr has apparently made his last film, without most people in America and around the world ever noticing him in the first place. Not that he particularly cares about that. Often held up as the last grizzled lion of the European modernist art-film tradition, Tarr has made just nine features in a 35-year career, most of them shown only at film festivals, art museums and other one-off events. Even so, his reputation among film critics, his fellow directors and other hardcore cinephiles rests mainly on two of those movies, one of which is so daunting that virtually no one has ever sat through it all the way without a break. (That would be "Sátántangó," or "Satan's Tango" -- the English title has never really stuck -- a seven-hour saga about a decrepit post-Communist agricultural commune invaded by a sinister con man. Susan Sontag praised it as one of the greatest films ever made, but she didn't claim that she watched it without a bathroom break.)

In more than a decade of writing about film for Salon, I've made only a few glancing references to Tarr's work -- not because anyone was stopping me, but because there didn't seem to be much point. Most people likely to be interested in his masterfully constructed, time-stretching, profoundly enigmatic fables or allegories (even to say that Tarr's films have stories is somewhat misleading) probably already knew about them. Furthermore, his films screened only sporadically at a handful of big-city venues -- only one, "Werckmeister Harmonies" from 2000, received an official American theatrical release -- and until recently were largely unavailable on Region 1 DVD or Blu-ray. But now, with the theatrical release of "The Turin Horse," a bracing, downbeat and even devastating work that will supposedly be Tarr's final film -- he's very much alive and only 56, but has announced that he's shifting to producing and running a film school -- and a complete career retrospective at New York's Lincoln Center, you too can follow along at home if you're curious.

All eight of Tarr's previous films -- from the documentary-style realism of Communist-era dramas like "Family Nest" (1977) and "The Prefab People" (1982) to "Werckmeister Harmonies" (2000), easily his best-known picture, and "The Man From London" (2007), which is, of all things, a film noir starring Tilda Swinton -- can now be found on home video through the usual channels. "The Turin Horse" will play in honest-to-God movie theaters in at least half a dozen cities (see below), and it's quite likely that the Lincoln Center retrospective will be exported to other venues as well. That leads us to the inescapable question of what it's like to watch Tarr's films -- and if most movies are difficult to describe in words, his are trebly so. How can I possibly convince you to watch a film that features a 10-minute traveling shot amid a roaming herd of cows? ("Sátántangó" again.) Nobody can; you're either game to try something like that or you're not. Comparisons and parallels will do no good. Tarr's best films are beautiful, forbidding, strange, often laced with black humor and almost always deeply pessimistic. Watching them is an experience unlike any other.

Tarr has been written about quite a bit, but I don't think most of that writing gets us anywhere. (Here's a 2001 essay by film scholar Peter Hames that provides a good overview of Tarr's career to that point.) He's been variously compared to such big names as Bergman, Tarkovsky, John Cassavetes, Theo Angelopoulos and Jim Jarmusch, but that's such a motley crew as to be meaningless. It's more about marking out territory and saying, "If you like those drugs, try this one too." Tarr himself mostly rejects such comparisons, and has said his favorite filmmaker is the famously decadent and prolific R.W. Fassbinder, whose pictures could hardly be more different from his. Except, and it's a big except, for the fact that both directors are primarily focused on the look and atmosphere of the film. Both want to show us the world as it is -- or at least as they see it -- and aren’t much interested in conventional psychological drama or spiritual speculation.

One way of explaining Tarr's moral vision, I think, is to say that he grew up in the Eastern bloc learning that communism was total crap, found out after 1989 that capitalism was crap too, and knew all along that religion was crap. Mix that earned cynicism with the lushness and severity of his cinematographic vision, and his famous penchant for ultra-long, elaborately choreographed deep-focus takes -- "Werckmeister Harmonies" is 149 minutes long, and consists of 39 shots -- and you get some of the most beautiful and most melancholy images you'll ever see on-screen. Tarr was never going to have a mainstream crossover moment because he doesn't tell stories (and his attempts to do so, including "The Man From London" and 1987's "Damnation," are arguably weaker films). I find his films moving and involving -- and much less "challenging" than, say, the most slow-moving of Tarkovsky's or Angelopoulos' films -- but in a completely different direction from a conventional, plot-centric entertainment. They are literally "moving pictures," paintings or photographs that move from one spectacular episode and image to another, hinting at narrative possibility or metaphysical significance but never laying it out.

In "The Turin Horse," Tarr and his customary ensemble of collaborators -- these include co-writer László Krasznahorkai (himself a prominent Hungarian novelist), composer Mihály Vig and editor/co-director Ágnes Hranitzky (who is Tarr's wife) -- use a mysterious episode from the history of philosophy as the jumping-off point for an apocalyptic saga that suggests Cormac McCarthy's "The Road" by way of Samuel Beckett. In March 1889, Friedrich Nietzsche suffered a mental breakdown after witnessing a cab driver whipping his reluctant horse on the streets of Turin, Italy. I can see why this story appeals to Tarr -- the man who pronounced God dead, laid low by a routine act of cruelty -- but if the horse and driver in this movie are meant to be the same ones, that's only because Tarr says so.

Nietzsche is nowhere to be found in this movie (although you could argue that his spirit is all over it, I guess), and neither is Italy. An elderly man, apparently named Ohlsdorfer (János Derzsi), and his battered but somewhat young daughter (Erika Bók), live in a miserable stone hut on some blasted, windswept Thomas Hardy-style heath, which seems more like the surface of Mars than the outskirts of Turin. They eat potatoes, struggle out to the well for water, drive the recalcitrant horse out of her stall for another futile effort to harness her, lock her up again, go back inside and eat more potatoes. (Tarr, who can be quite genial in person, told New York Film Festival audiences last year that the real-life horse was unharmed, and had recently given birth to a foal.) The only sound is the incessant howling of the wind, with intermittent interruptions from Vig's haunting, minimalist musical score. The man and woman hardly speak, and indeed the sheer brutality of their struggle for survival requires no explanation. The silence is broken when a drunken neighbor stops by, unleashing a bitter monologue about how everything good and decent and noble in the world has been destroyed. A band of gypsies pass by in a cart, bringing a moment of vivacity but trailing chaos and darkness in their wake. The horse stops eating, the well dries up, and the last points of light in the world seem to go out.

A laugh riot, as you can tell. But I left the theater oddly exhilarated -- to see daylight again was so great! -- and, odder still, eager to see it again (although perhaps not today). Tarr's films can be arduous, even wrenching, but they're not boring. Watching them is something like visiting the world's most fantastic art museum and taking an ice-cold shower, both at the same time. Tarr claims never to watch mainstream movies and to despise Hollywood, but he has more in common with, say, Martin Scorsese than he'd like to admit. He wants to dazzle us and hypnotize us while we sit there in the dark; he doesn't care about whether we search our souls for deeper meaning. In his own deep, dark, post-Nietzschean, post-Marxist and post-Christian way, he's a showman, and he has rung down his own final curtain with a bang. I'll let him have the last word, from a fine interview he did last year with Peter Sbrizzi of Hammer to Nail:

I remember when I did my "Sátántangó," this seven hour, 15 minute-long movie, everybody said, 'You are totally crazy, nobody wants to see this stupid movie,' and I didn’t care, and you know what is happening? This movie is still running around the world since 16 years -- and I do not remember the movies that were started and released at the same moment that we did this. [Note: The top grossers of 1994 were "The Lion King," "Forrest Gump" and "True Lies."] I don’t remember that because you forget them; after two months they are finishing in the garbage and nobody remembers this because it’s just simple, stupid storytelling. If you have a real movie, you can watch it 20 or 25 years later or 50 years later; the time will judge it, OK? And by the end now we have more audience than this stupid box office hit.

"The Last Modernist: The Complete Works of Bela Tarr" plays through Feb. 8 at the Film Society of Lincoln Center in New York. "The Turin Horse" opens Feb. 10 at the Elinor Bunin Munroe Film Center in New York; Feb. 17 at Webster University in St. Louis; March 2 at the Laemmle Music Hall in Los Angeles and the Miami Beach Cinematheque; March 9 at the Harvard Film Archive in Cambridge, Mass.; March 22 at the Walker Art Center in Minneapolis; March 30 at the Belcourt Theatre in Nashville; April 6 at the UWM Union Theater in Milwaukee; and April 20 at the Northwest Film Forum in Seattle, with more cities to follow.