How to fight Indiana's "Right to Work" law

Unionism is more likely to win if labor acts like a movement, not a business 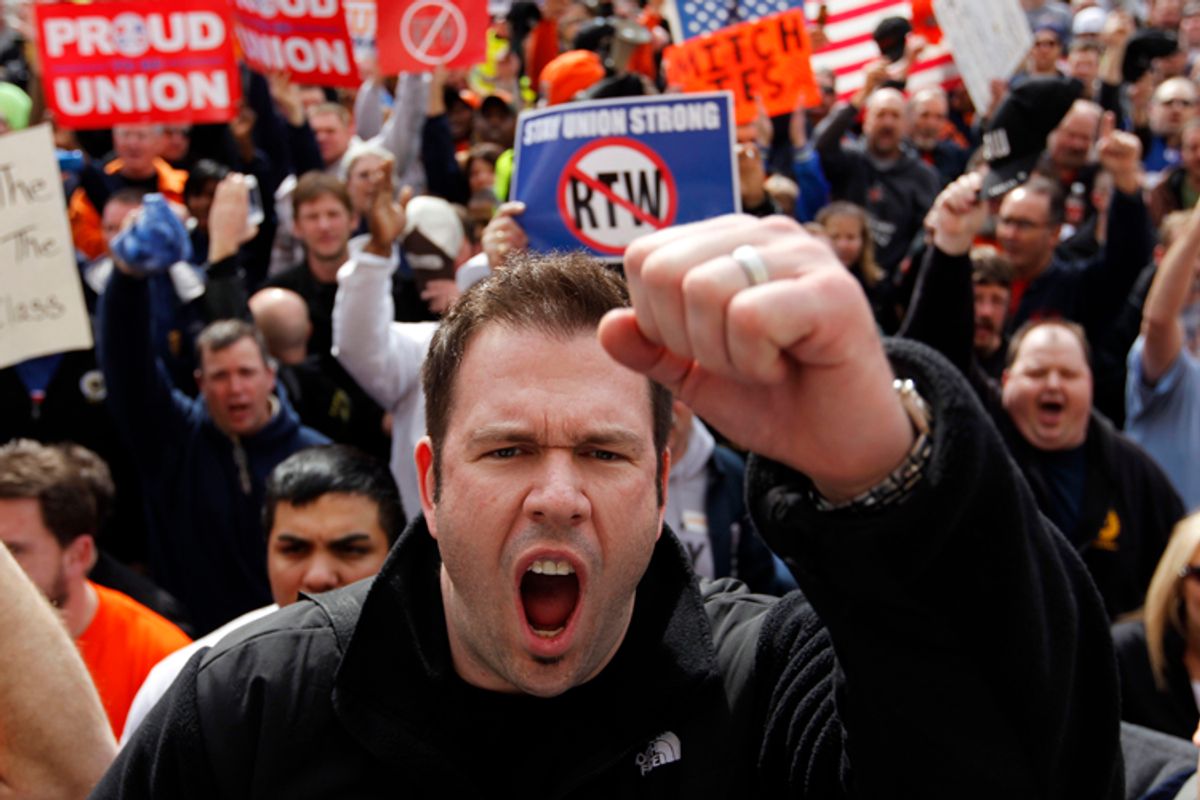 On Wednesday Gov. Mitch Daniels delivered a body blow to organized labor, signing a bill making Indiana the 23rd “Right to Work” state.  Daniels’ law, which unions will protest during Sunday’s Super Bowl in Indianapolis, poses a major test for Indiana’s labor movement.  To survive “Right to Work,” Indiana unions will have to disregard one of the most popular arguments made recently by their supporters: that a union is a business.

As a former union organizer, I’ve been squirming in recent weeks listening to the arguments made by Indiana Democrats against “Right to Work,” the brilliantly titled legislation that bars union contracts from requiring employees represented by a union to pay for that representation.  Sen. Greg Taylor said the bill needed to be amended to restore the principle “that you have to pay costs of services.”  Sen. Earline Rogers cited a Republican mayor’s comparison of “Right to Work” to welfare: providing benefits to people without making them pay for them.  Other “Right to Work” opponents compared a union to a temp agency or a sports agent.

Though the welfare comment is particularly insulting – to welfare recipients and labor alike – all of these arguments invoke the same analogy: that a union is a business that provides a service for a fee.  There’s an undeniable point to be made here. Unions are legally required to equally represent all employees covered by a contract, whether or not they pay a cent in union fees.  That representation includes contract negotiations and arbitration over grievances (in fact, unions sometimes go out of their way to pursue cases on behalf of critics, lest they file charges against the union).  Barring unions from requiring employees to pay these costs is an effective way to defund them.  That’s why right-wingers love “Right to Work” so much.  And it’s why, like professor Gordon Lafer, I found the irony instructive when a chapter of the pro-“Right to Work” Chamber of Commerce rebuffed a local business seeking to receive the benefits of Chamber membership without paying any dues.

But a union isn’t a Chamber of Commerce, and it certainly isn’t a sports agent.  And when labor’s defenders say a union is a business, I wince because of where I heard that argument all too often in my organizing days: from dues-paying union members I was pushing to take action.  When declining to join a picket line, or come to a meeting, or talk to a co-worker, some would defend their inaction with a simple, “That’s what I pay dues for.”  Or “What am I paying you for if I have to do all the work?”  Sometimes we’d wield dueling metaphors: They’d compare my role as a union staffer to a lawyer hired to fight on their behalf; I’d compare expecting to get a strong union just by paying dues to trying to build muscle just by paying for a gym membership (these were not my proudest moments as a union organizer).

What allows some unions to thrive in “Right to Work” states matches what brings success in the rest of the country: building a movement driven by rank and file leaders with a sense of ownership of the union and responsibility to do far more than just pay dues.  That includes organizing at work and outside of it, and confronting both difficult co-workers and disrespectful managers.  The largest local of UNITE HERE (the international union I worked for in California and Pennsylvania) is Las Vegas’ Local 226, in “Right to Work” Nevada.  The vast majority of Local 226’s 55,000 members voluntarily pay union dues.  More important, in some of 226’s recent campaigns to organize non-union casinos, most of the work has been done by union members, working full-time shifts in their unionized casinos and then volunteering after hours as unpaid organizers with the union.

Clocking out of work and spending a few hours working unpaid for your insurance agent every day would be a sign of madness – even if it didn’t involve risking the wrath of your boss.  Doing it for a union, on the other hand, is a sign of hope.  But most union locals don’t look like that, in UNITE HERE or in the United States.

Too often, unions do sell themselves as businesses or service providers: sign a card, pay dues, and sit back and enjoy our protection and benefits.  At best, that’s a false promise.  At worst, it’s a recipe for extinction.  That’s because a union contract, or a law, is just a piece of paper unless workers are prepared to defend it.  Where companies follow the rules, either it’s a reversible act of forbearance, or it’s because workers have found the leverage to make them.

When workers seek to organize a union, companies often get away with campaigns to terrorize them out of it.  When workers try to negotiate a contract for the first time, the odds are high that their employer will sabotage negotiations so they never reach a contract.  Even where workers have had a union for years, companies are increasingly locking them out at contract time – that is, forcing them out of work and not letting them come back to work until they agree to major concessions.

All over the country, there are unions beating back these attacks.  But it doesn’t happen through the efforts of union staff alone.  It takes smart strategy combined with a movement of workers to make it happen.  That’s why the complaint that “Right to Work” allows free-riding, while accurate and perhaps politically smart, is nonetheless somewhat ironic.  In any union that’s effective, there’ll be some workers who free-ride, dues or not, on their co-workers that do what it really takes to win: tracking down clients and turning them against their boss, visiting non-union workers at home, marching on their managers, picketing their company.

There’s a lot to hate about “Right to Work.”  But what’s worst about it isn’t that it lets some people get union representation for free.  It’s that it makes the difficult work of building a true workers’ organization that much harder.  First, because sapping resources hurts staffing, and can lure unions into the trap of focusing on selling the value of paying dues rather than pushing workers to do much more.  And second, because making fee-paying optional gives bosses another opportunity to campaign against the union.

Every union local, and every union member, faces a choice between unionism that acts and is treated like a business, and unionism that acts like a social movement.  To survive after losing the fight in the statehouse, Indiana labor needs to win the fight in a thousand break rooms and living rooms – not just over whether it’s worth paying dues, but whether it’s worth joining the struggle.