The battle for McPherson Square 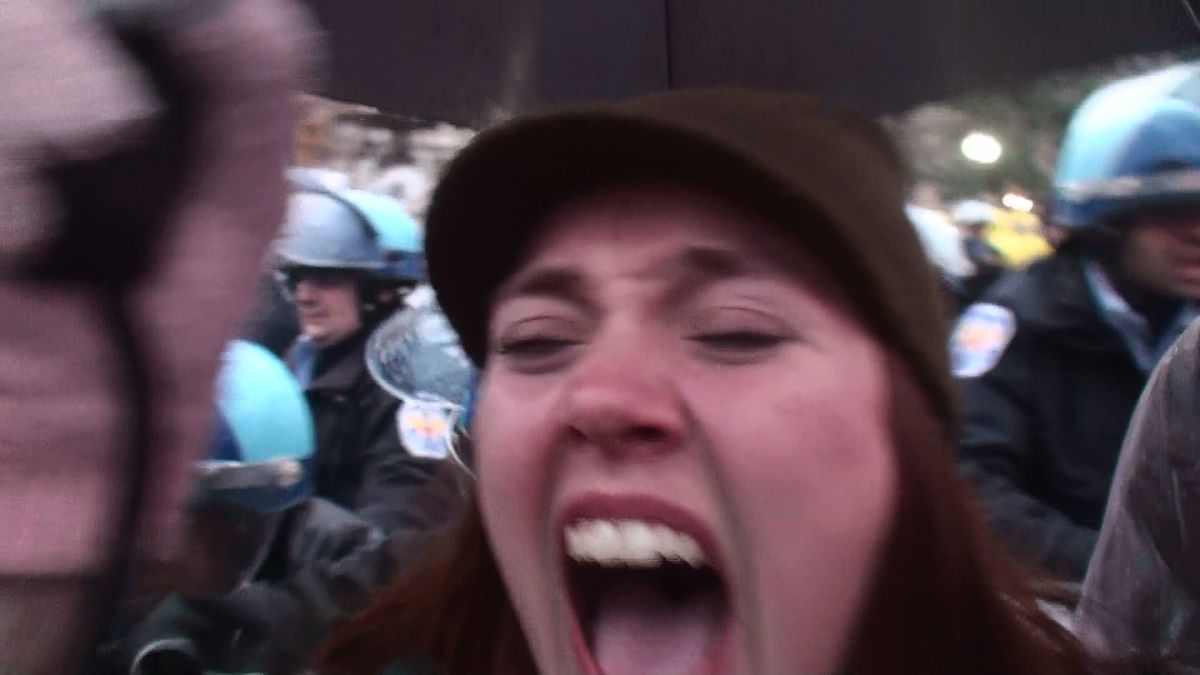 "Move back!" shouted the cop wielding a clear Plexiglas shield emblazoned with the words "U.S. Park Police" as he moved into the crowd of demonstrators thronging McPherson Square on Saturday afternoon.  The photographer next to me was shouting, "I'm press!" but that didn't seem to impress the phalanx of officers advancing on us, applying their shields to our shoulders.

"Move back!" the cop explained, and I went sprawling into what used to be the main information tent of OccupyDC. It was the place where you could always find someone who could tell you about the camp's activities. It was a place where I had debated fiat money with a Ron Paul supporter, chatted with a delusional homeless man, and talked union politics with a woman from National Nurses United. Now the tent was a flat lumpy mess, and people were scrambling over it to get away from the suddenly aggressive cops. Nearby, mounted officers on horses were slowly wading their steeds into a river of people, and some screamed in panic at the approach of the massive animals.

What had started 12 hours earlier as a politically tinged eviction of an unsanitary but entirely peaceful encampment had suddenly turned into an aggressive display of force by the National Park Police officers (including 24 officers bused in from New York City.)

By late Saturday night, the occupiers of McPherson Square had been evicted. The 300 or so denizens of the encampment -- and several hundred supporters who rallied to their cause -- were dispersed. Seven people were arrested in the course of the day. At least three people were injured. Your reporter lost his notebook but was otherwise unhurt.

The tent of dreams

The battle of McPherson Square began at dawn on Saturday. Park Police officers had received a call around 2 in the morning saying duty called. They assembled at the intersection of 15thStreet and K Street at 5 in the morning and moved in to the OccupyDC camp within the hour. The first thing they told the protesters was that they would have to take down their "Tent of Dreams," a massive blue sheet they had draped over the statuesque shoulders of Civil War Gen. James McPherson in the center of the park.

The occupation of the park had begun 129 days before when a small group, inspired by the Occupy Wall Street movement in New York, had started camping on the grass and holding daily general assemblies. Over the next four months, the camp grew to more than 100 tents and became a hub for protests targeting the city's political elite, ranging from Congress to the Chamber of Commerce to the Democratic National Congressional Committee.

The tent of dreams was a violation of Park Service rules, the cops explained. If the protesters did not take it down, the police would. The protesters decided to take down their pride and joy.  "It was sad," said John Zangas, one of the protesters. "We put up the Tent of Dreams for all those Americans who have lost their houses in the last couple of years. We wanted to make a symbol for them and the world to see that someone was standing up for them." In the early morning light, the 50-foot-square nylon drop cloth, emblazoned with twinkling stars and slogans ("Shalom"), was folded up and removed.

The Park Police were well prepared for their mission. Under the command of two commanding officers named Dillon and Reid, 75 officers methodically and politely took control of the park over the course of the day. Citing National Park Service regulations against overnight camping, they asked protestors to leave, giving them time to take personal possessions. The cops set up black iron barricades, and set about inspecting the uninhabited tent city that had captured the capital's imagination with its idealism and its squalor. Park Service employees in yellow hazmat suits looked through the tents, stuffing abandoned camping gear into trash bags and hauling away refuse.

The process wasn't always peaceful. To secure the northeast corner of the square, a file of 40 officers bulled their way down one of the sidewalks of the square while the demonstrators chanted, "This is a public space." One of the occupiers, young Iraq war veteran Michael Patterson, cursed the police but gave way to the overwhelming display of force by the impassive officers. Another protester, a musician named Jonny, called out "mic check" and read the text of the First Amendment. The crowd read along, declaring "Congress shall make no law ...  abridging ... the right of the people peaceably to assemble."

The dismay of the demonstrators was palpable.  "I think the tactic of camping out has lost its usefulness," an occupier named Travis told me. "But I'm here in solidarity because there are a lot of people who have no place to go. How can they evict homeless people from the only home they have?"

By 3 o'clock, it seemed the protesters and police had reached a degree of mutual understanding. As the police dismantled the tents, the demonstrators stood back and contented themselves with mic checks about why they joined the movement. ("I occupy because my friends can't afford to go to college," said Ben, a freshman at American University.) While a few young men taunted the police as "fascists" and "faggots," equally outspoken women in the crowd rebuked them for their language and urged them to show respect.  The cops, carrying guns and gun tear gas, spoke mostly among themselves.

"I look at these cops, most of them are 26 or 27 years old, and I know who they are answering to," said Andrew Benthall, a bartender and Occupy sympathizer who also stood on the front lines of the confrontation. "They're just like me. They answer to their wives and their bosses. They're not bad people. "

The raid came five days after the Park Service, under pressure from Darrell Issa, a senior Republican congressman, posted an announcement that a previously ignored ban on overnight camping in the park would be enforced. For many demonstrators, Issa, a conservative Republican and the wealthiest man in Congress, embodies the 1 percent elite, whose privileges, they say, come at the expense of the general public.

"They're not listening to the people"

The trouble started around 5 o'clock when the cops turned their attention to the last uncleared quadrant of the park, home to the camp's library, a big blue tent where you could borrow a book by Vaclav Havel or a biography of Che Guevara. As darkness and a light rain began to fall, the officers negotiated with the camp's library committee. When the occupiers declined to leave, the cops seemed to lose patience and professionalism for the first time all day. Two lines of police officers advanced much more aggressively than they had before catching the protesters in a pincher action.

Chaos ensued with the advancing officers shouting, "You have to leave, this area is closed" while shoving people backward. Dozens of people  were knocked down.  The arrival of the mounted police sent people running for safety. As the demonstrators backed up onto the empty expanse of blocked-off K Street, they took pictures with their smartphones and chanted "shame, shame, shame" at the police. After about 10 minutes, everybody, except for the cops and the cleanup crews, had been forced out of McPherson Square.

As the officers set up barricades on the park's perimeter, the frustration of the demonstrators exploded. "You are animals," one woman shouted at the line of blue-helmeted officers. "You almost trampled a little girl. Do you have kids?" Another man said, "Go back to Syria. They need you there." One man who had been taunting the cops all day with vulgar sexual insults was knocked down, manhandled, and hauled away bound and tied.

Stunned but unhurt, Hillary Lazar, a local artist and member of the library committee, said the library holding of more than 1,000 books had not been damaged during the police action.

Laura Potter, a retired Army nurse on disability, watched in disbelief as her green tent was trampled.

As the rain continued to fall, 40 officers stood in a long line looking grim. The protesters called an impromptu general assembly in the middle of K Street. On the boulevard that houses the city's leading law firms and lobbying shops, these young radicals reviewed the events of the day with yet another mic check.

"We have seen unprovoked violence toward the occupation in DC," began one speaker, and the crowd of perhaps 50 people repeated his words.  As  people recounted the best and the worst things about the day, their spirits seems to rise. "We changed the discourse of this city," said one man. Another pointed out that President Obama lived less than two blocks away, and the chant "Obama is responsible" went up. A third man criticized the movement for not cultivating local political allies who might have protected the camp.  "It is time for us to take this occupation out into every neighborhood of this city," he said. "On the edge of the crowd, Ryan Gomez, a perennially cheerful 24-year-old occupier was shaking his head but smiling. "We'll be back  tomorrow," he  assured me. "This movement is not going away."

As tempers cooled and rain let up, the agitated but proud protesters traded hugs, tears and stories while the stoic but equally proud cops retreated silently into the night, their mission accomplished. The ability of the federal government to clear the streets of peaceful protesters had been established, while those who speak for the 99 percent in the nation's capital could boast they had exposed the face of 1 percent power. In the battle of McPherson Square both sides could claim a victory in a struggle that is sure to continue.