There were cars and babes galore. But in a game that rematched teams from four years ago, retro ruled the ads, too 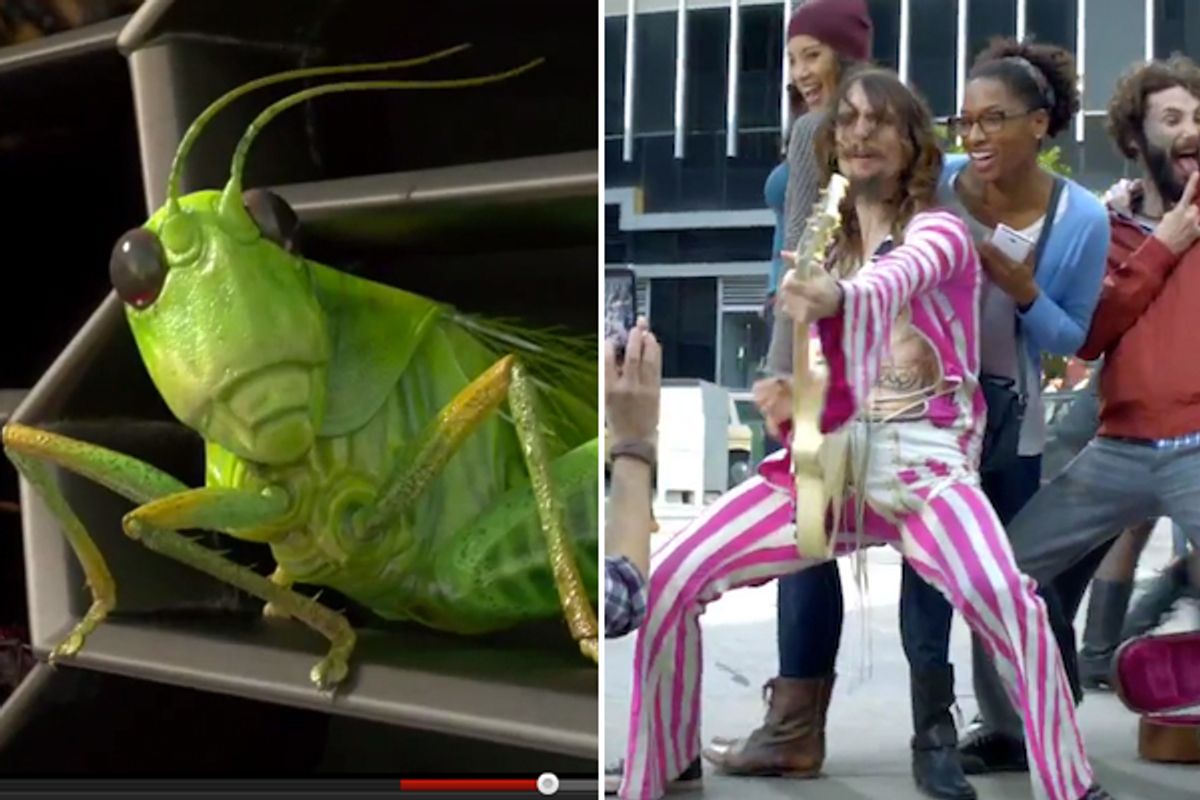 Several months ago, a 45-year-old ad executive drove home in his roomy, fuel-efficient SUV, anticipating the watery beer that awaited in his fridge, and thought, "Dammit, I used to be cool. Cool like Lloyd Dobler." And then he went on to create the ads for the 2012 Super Bowl. Nostalgic much, Gen-X?

Sure, this year's crop of ads featured hot babes, cute kids, funny animals and Doritos, but they were also heavily tinged with one overwhelming message: Hey, you. Yeah you, the one who once thought your band was going to be the next Love & Rockets. Can we sell you a car? Herewith, Salon's picks for the Super Bowl's best, the worst, and the most likely to make John Hughes roll over in his grave.

You guys! Samsung has revolutionized communication by inventing … a stylus! But somehow, trotting out every possible celebratory, flash-mob cliché from the gospel choir to the marching band, all to the infectious strains of The Darkness, makes for impossibly giddy fun.

Volkswagen: The Dog Strikes Back

Why? It helps that the Tone Loc fits in with the whole '80s theme, but mostly because whoever thought to name the dog Mr. Quiggly is a GENIUS.

Cheesy as hell. But imagining the likes of Christina Aguilera and Adam Levine as furniture-smashing, ass-kicking action stars, battling it out over an unseen vocal powerhouse, is funny. That the mystery voice turns out to be the ubiquitous, forever awesome Betty White is adorable.

If you're looking for a vehicle that will go skydiving, kick flipping and bungee jumping, this is definitely, jaw-droppingly, the one. Weirdly, the car also boasts of starring in an OK Go video, though the Super Bowl clip preferred Fun's anthemic "We Are Young." Sonic: the good-time car that will cheat on you.

Oh Lordy, who'd have thought there was still comedy to be milked from the Soup Nazi? But casting Jerry Seinfeld as desperate enough to offer up sock puppets and holographic monkeys for a chance to be the first to drive the new Acura – and Leno as the jerk who robs him of the dream – somehow comes off as absurd enough to be fresh.

Accountancy for people who urinate in the pool. If ever there were a metaphor for the 1 percent this was it.

Adriana Lima slinks into a pair of stockings, tousles her hair and prowls past an "XOXO"-festooned floral arrangement. "Guys, Valentine's Day is not that complicated," she purrs. "Give. And you shall receive." Hint: She is not talking about a free simonizing. For perpetuating the notion that $29.99 worth of roses and pink carnations entitles a man to a blow job, Teleflora, you win most ridiculous, sexist ad of the night.

You may be smart enough to know that a lousy bouquet won't get you laid by a beautiful woman with a foreign accent, but are you dumb enough to try to make out with a car? The Fiat will slap you and drink your latte -- and you will love it, you helpless, helpless slave to your penis.

If you're the kind of dog who kills and buries cats, or the kind of man who can be bought off for some neon orange snack food, have I got a nacho for you.

The End of Days

In a race between a man, a car and a deadly feline, the car will take off and the man will be mauled to death. Epic automobile win, I guess.

Only 236 years to go, USA! Because Clint Eastwood would like to growl at you that it is "halftime in America." "We're all scared, because this isn't a game." Somehow, however, we will rally "because that's what we do." It seems to involve firemen and dropping the kids off at school. It's supposed to be hopeful, but when Dirty Harry says, "The world's going to hear the roar of our engines … yeah," I just want to hide under my bed and cry till the smoke clears.

When that Mayan apocalypse hits and the world starts looking like a Cormac McCarthy novel, you know what will be left of civilization? Twinkies, Silverados and Barry Manilow music. Better hope you're one of the raptured.

So what's your death and dismemberment plan looking like these days? Is it as good as He-Man and Fat Albert's?

In a droll spot filled with cinematic Easter eggs (that Red Wings jersey!) and "Oh yeaaaahs," Honda would like to remind you of that carefree, rebellious scamp Ferris Bueller. But the fact that now he's a middle-age movie star playing hooky from his overpaid career, not to mention a man who in 1987 was the driver in a head-on collision that killed two people, makes this spot about as easy to watch as your dad jamming in the garage with his buddies. Oh nooooo.

Keeping up the theme of '80s icons who've killed people with their cars selling you cars, Kia deployed Vince Neil  for a spot that assumes that while ladies dream of rainbows and horseback riding with puffy-shirted Fabio wannabes, dudes even slumber awesomely. Guy dreams, you see, employ Chuck Liddell and Adriana Lima, rhino riding and Motley Crue. And big sandwiches. Yet props to Kia for having its hero bust out of his bikini-babe-saturated reverie to grab his wife from her dream, and speed off into the sunset together.

A bunch of bloodsuckers are having a teeth-baring, tree-climbing shindig in the woods, until some yahoo comes along and kills off the guest list with his bright-as-day headlights. Cute, but the big reveal was its use of Echo and the freaking Bunnymen's "The Killing Moon."

And for the kids who were a little less emo, Budweiser takes on a stroll through modern history, in a mashup that combines Flo Rida's "Good Feeling" with the Cult's classic "She Sells Sanctuary." The '70s disco party with the horse was ridiculous, but the fact that a grungy mosh pit is now a sentimental touchstone in a beer ad should definitely drive you to drink.