Don’t look now, but he could have a very big night tonight – and the Romney campaign is spooked 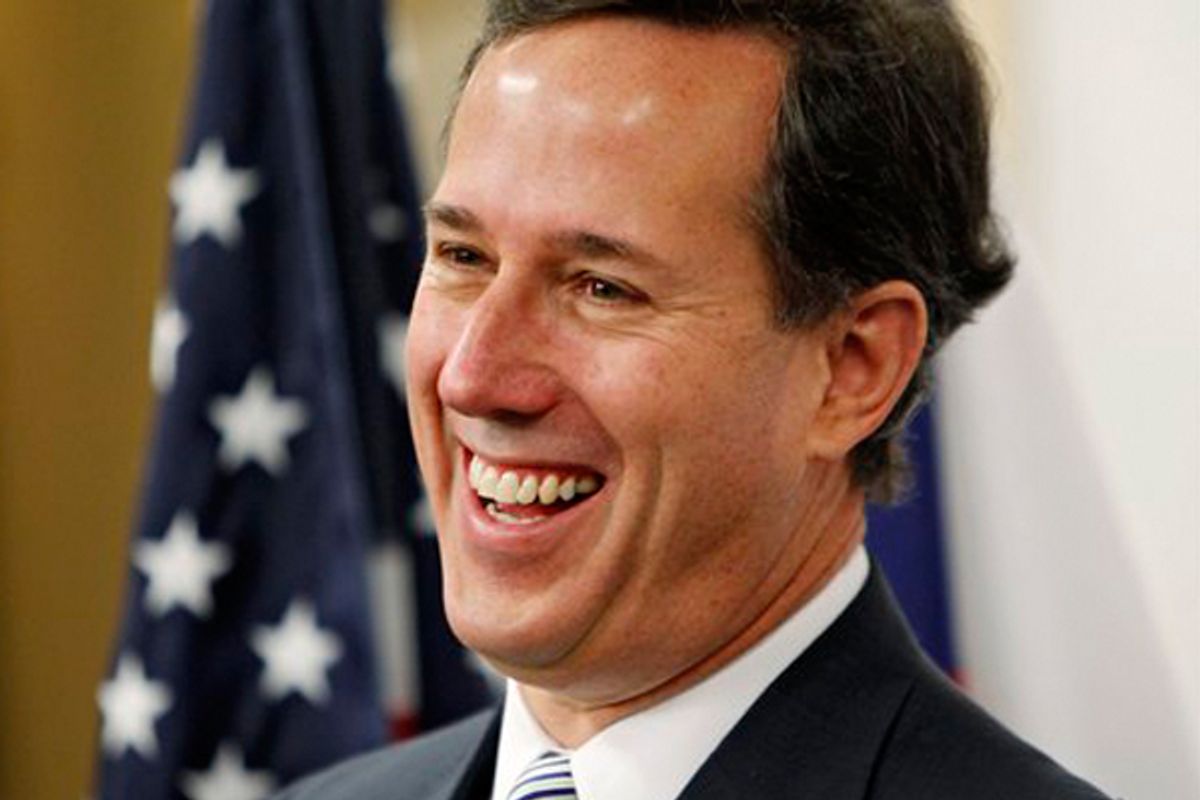 February is supposed to be Mitt Romney's month, but there's a real chance that tonight will belong to Rick Santorum. Three states are holding nominating contests, and Santorum is well-positioned to win two of them -- with an outside chance of posting a clean sweep.

Polling from PPP released late last night gives the former Pennsylvania senator a 45 to 32 percent lead over Romney in Missouri, which is conducting a non-binding primary. Newt Gingrich failed to qualify for the ballot in the state, and Ron Paul is running a distant third with 19 percent. Santorum is also ahead in the caucus state of Minnesota, where PPP shows him 9 points up on Romney, 33 to 24 percent, and just 10 points (37 -27 percent) behind the former Massachusetts governor in Colorado. Gingrich is running in third in both of those states.

Perhaps the most significant finding is that Santorum, who has mostly stayed in the background as Romney and Gingrich have traded vicious insults, enjoys favorable ratings of over 70 percent among Republicans in all three states -- significantly higher than the scores for Romney and Gingrich. And Minnesota and Colorado are both particularly conducive to his emphasis on social and cultural issues, with activist-oriented caucus electorates in which the sorts of Christian conservatives who propelled him to his Iowa victory holding disproportionate sway.

It's true that no convention delegates will be directly awarded through today's contests, but there's a clear opportunity for Santorum here. Look at it this way: In late December and early January, Gingrich's numbers crashed and Santorum surged to his unlikely Iowa win*, setting up what briefly seemed like a two-man race between Romney and Santorum. But Santorum lost his momentum in New Hampshire, allowing Gingrich to get back in the game in South Carolina, where he was boosted by some serious super PAC assistance and the lack of attacks from Romney and the GOP establishment. But just about nothing has gone right since then for Gingrich, who seems decreasingly relevant by the day.

So the timing of today's contests is fortuitous for Santorum. If he can post a series of breakthrough showings, it could help him supplant Gingrich as Romney's chief rival. There's still a theoretical opening for a conservative alternative to Romney to do some real damage in early March. With some wins today, it could be Santorum -- and not Gingrich -- who gets to play that role.

The Romney campaign clearly recognizes this potential. As soon as the South Carolina primary was over, they launched a relentless assault on Gingrich, determined to bury him once and for all, while leaving Santorum alone. But yesterday, they started attacking Santorum too, leading one of Santorum's strategists to declare, "It's a badge of honor that Romney has decided to try to destroy us." He's right, of course. It's a sign of progress for Santorum that he's again relevant enough to force the front-runner to issue nasty press releases. But if Santorum wins big tonight, the abuse will get a lot worse. Which means he should probably enjoy those 70 percent favorable ratings while they last.