Ellen stands up to One Million Moms

A conservative group calls for her removal from a JC Penney campaign, but the host responds with humor and heart 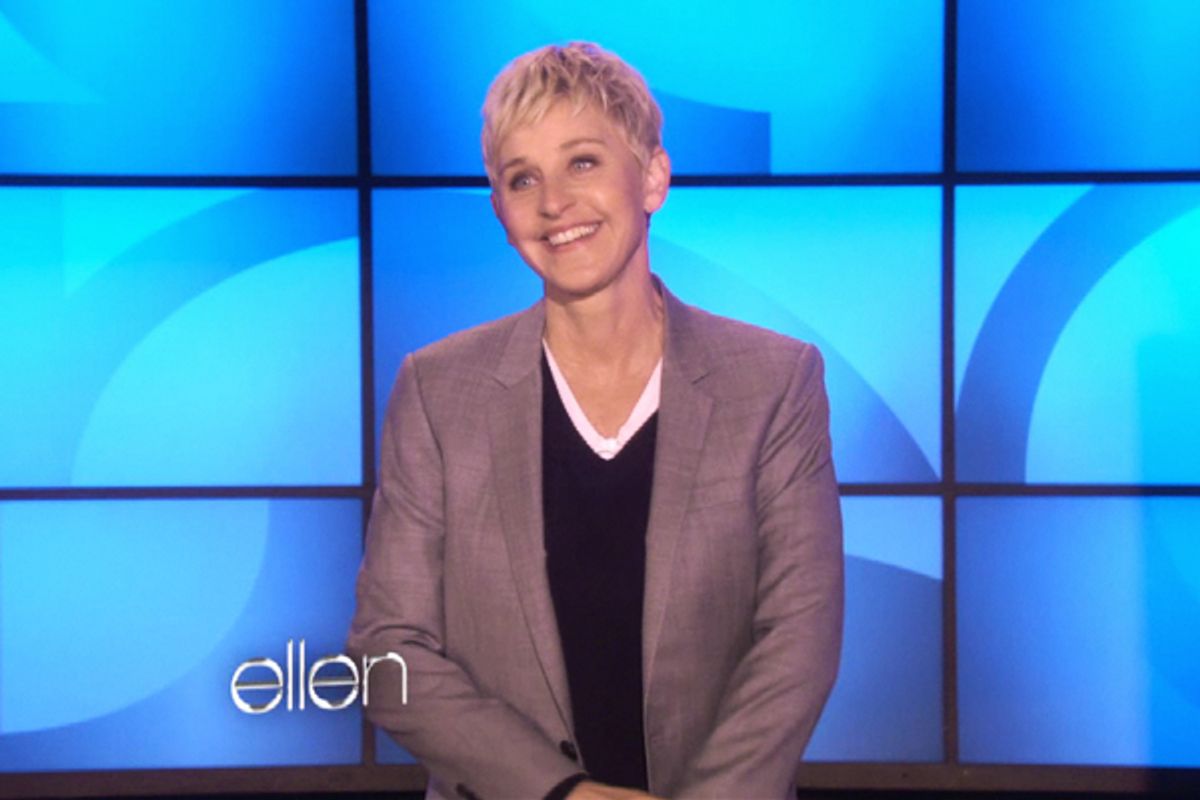 The conservative Christian group One Million Moms is angry. Angry like just-missed-an-awesome-sale angry. Sure, the down-home-sounding offshoot of the reliably right-wing American Family Association exists in a perpetual state of twisted knickers. It's whipped itself into a frenzy of indignation at the not-quite-exclusionary-enough tactics of Macy's, Levi's, Jenny Craig and Oreos in just the past few months. But its outrage at JC Penney, the jeans supplier to at least 800,000 of those million moms, is especially intense of late.

At issue is the group's contention that by hiring Ellen DeGeneres for a new campaign, the department store is "jumping on the pro-gay bandwagon" and turning away from "traditional families." The organization warns darkly that "Unless JC Penney decides to be neutral in the culture war then their brand transformation will be unsuccessful." There is so much to love in that sentence alone. Culture war! Brand transformation! Fearless disregard for the rules of comma usage after a subordinate clause! "The majority of JC Penney shoppers will be offended," they continue, "and choose to no longer shop there."

JC Penney, however, which recently declared that "We share the same fundamental values as Ellen," has  remained unmoved from its perch on a "pro-gay bandwagon" in the midst of a "culture war." (I hope that bandwagon is reinforced.) Also unmoved: the woman at the center of the controversy.

On her daytime talk show Wednesday, DeGeneres cheerfully opened by talking about Proposition 8 being overturned in California, then segued into a riff about her partnership with Penney's. "Normally I try not to pay attention to my haters," she said, "but this time I'd like to talk about it."

After announcing she was "proud and happy" that JC Penney was sticking by her side, she explained to America that "Being gay or pro-gay is not a bandwagon. You don't get a free ride anywhere. There's no music, and occasionally we'll sing, 'We Are Family,' but that's about it." And she noted that "For a group that calls itself the Million Moms, they have only 40,000 members on their [Facebook] page. They're rounding to the nearest million." It was a witty retort to a campaign of hate, though frankly, not nearly as hilarious as the Million Moms' depiction of DeGeneres as an "open homosexual spokesperson."

On her show, DeGeneres read some of the hundreds of supportive messages that have been posted on the Million Moms' own Facebook page since their campaign against her launched. DeGeneres has also received public support from, of all people, Bill O'Reilly, who said on his program Tuesday that the protest was "a witch hunt and shouldn't happen." When you're too loathsome for Bill O'Reilly, you've really outdone yourself, loathsomeness-wise.

One Million Moms describes itself as an organization for people who are "fed up" and "tired," one that devotes itself, seemingly exclusively, to complaining "on behalf of our children." On her program Wednesday, DeGeneres said, "I stand for honesty, equality, kindness, compassion, treating people the way you want to be treated, and helping those in need. To me, those are traditional values." Even the most die-hard shopper knows that values aren't just reasonably priced furnishings from the Cindy Crawford collection. They're how you live. And if you're going to be on a bandwagon, who wouldn't choose the one without all those angry people on it?