In 2012, an industry in crisis will honor a bunch of movies about depressed people. What does it say about us? 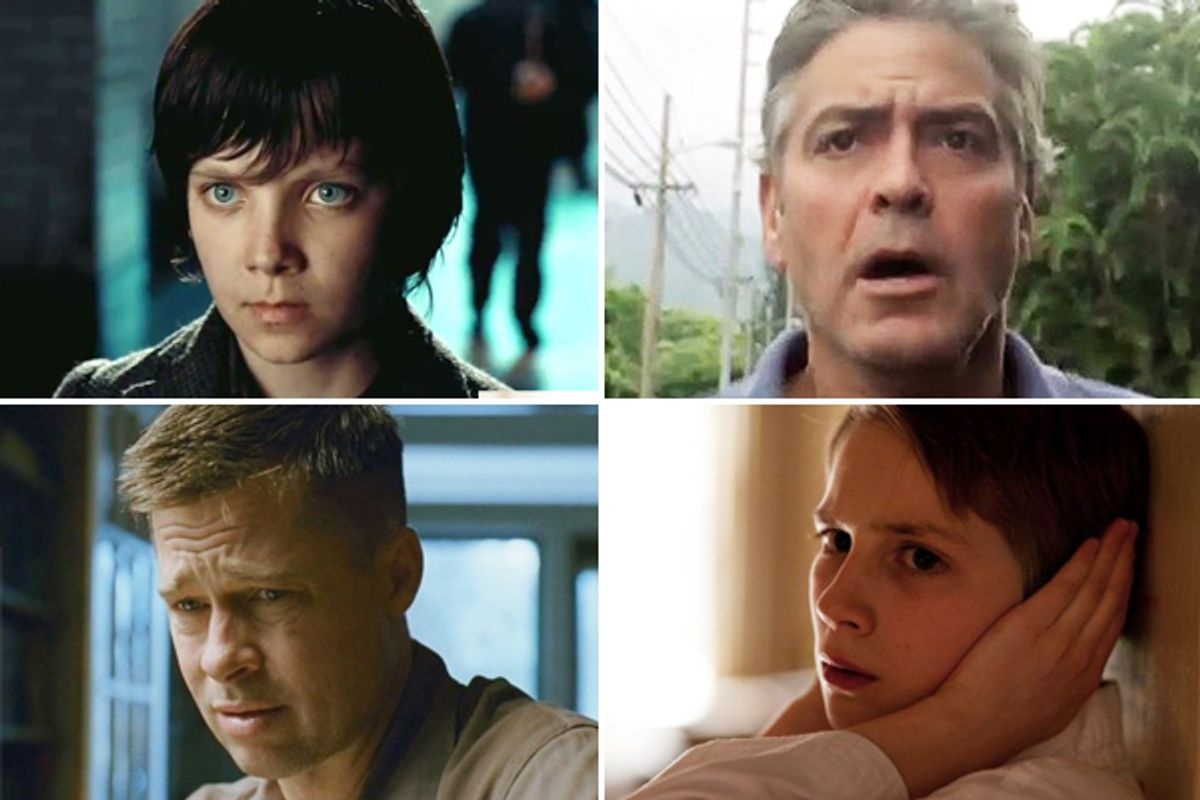 Clockwise from upper left: Asa Butterfield in "Hugo," George Clooney in "The Descendants," Thomas Horn in "Extremely Loud and Incredibly Close" and Brad Pitt in "The Tree of Life"
--

It's beyond redundant to say that the Academy Awards are Hollywood's way of making itself feel better. Self-congratulation is the foundational axiom of the whole enterprise, which for many years amounted to a version of American triumphalism. We had the most powerful nation in the world and the dominant manufacturing economy, and nothing symbolized the global hegemony of American culture and values like the worldwide popularity of America's dream factory.

If in those days the Oscar campaign was a question of burnishing the imperial brass, this year it's something quite different. These are the Oscars of wounded dads and autistic kids, of orphans in love with old movies and lonely guys struggling to break free of nostalgia. When you look at this year's nominated films, it's not like there'a a tenuous theme that halfway threads them together. There's more like a torrent of male grief, sadness and loss that pretty well drowns you. These are the maudlin Oscars, "boats against the current, borne back ceaselessly into the past"; the Therapy Oscars, the Oscars of Healing, the Oscars of Chicken Soup for the Hollywood Soul. I'm just not sure the therapy is likely to meet the patient's needs.

As you may have noticed, the economy has changed a bit in recent years. Our corporate overlords have outsourced our entire industrial economy to Asia -- the invisible hand made them do it! -- and the largest global crisis since the Great Depression has left us mired in seemingly permanent debt and stagnation. (Socks are much cheaper than they used to be, though, so it was all worth it!) Movies, along with military hardware, remain almost the only economic sector where America still reigns supreme. (The multilingual industries of India make more films and sell more tickets, but remain far behind in terms of global revenue.) Indeed, it can sometimes be difficult -- as with "Transformers: Dark of the Moon," the second highest-grossing film of 2011 -- to tell the difference between the movies and the military gear.

But despite producing a series of enormous worldwide hits last year, Hollywood has been badly hurt by the recession, and faces a mounting crisis with no obvious solution. Box-office results last year were not merely bad overall, they were a lot worse than they looked. In terms of actual dollars, the decline in United States box-office receipts from 2010 to 2011 was around 3.5 percent, but higher average ticket prices masked a 5 percent drop in attendance, following another 5 percent drop the year before that. That's right: There were roughly 10 percent fewer tickets sold in 2011 than in 2009, and fewer people went to the movies last year than in any year since 1995. Given that a disproportionate amount of last year's dollars came from franchises that have either definitely or probably played out the string -- "Harry Potter," "Transformers," "Pirates of the Caribbean," "The Hangover" -- some people in Hollywood are forecasting a Maya-style apocalypse in 2012.

And then there are the Oscars. I don't think you need to be Dr. Freud -- or Viggo Mortensen playing Dr. Freud -- to see this year's Academy Awards campaign as the film industry's half-conscious attempt to lick its wounds, buck itself up, whistle a cheery tune and imagine that prosperity lies right around the corner. For one thing, that's the only way I can make sense of the best-picture nomination given to "Extremely Loud & Incredibly Close," which is pretty much the Ur-example of an earnest, sentimental, middlebrow Oscar-bait vehicle that nobody actually liked. Furthermore, Jesus -- if only the tune were a bit cheerier. Have you ever seen such a parade of depressed, wounded and dysfunctional men and boys as in this year's roster of best-picture nominees? During the first Great Depression, we got "It Happened One Night," "Grand Hotel," "42nd Street," "Top Hat," "You Can't Take It With You" and a little something called "Gone With the Wind" (all of them Oscar winners or nominees). This year we get a washed-up movie star, a cuckolded and about-to-be-widowed dad, a weird kid with a dead dad (times two), a guy trapped in the past, a divorced dad running a losing baseball team, and an emasculated hardass dad with a flying wife who's trapped in the past in a movie nobody can understand. Oh, and a horse.

Seriously, the only movie among this year's nine best-picture nominees that isn't a study in masculine suffering is "The Help," simply because it doesn't have any men in it. (I'll grant half a point to the decidedly odd "War Horse," whose human characters don't matter much and tend to die rapidly.) But "The Help" can serve in its own way as analogy and salve for Hollywood's (and America's) current predicament, since it presents itself as a moral fable about how we all faced a Difficult Time and became stronger and better people. It, too, is an ambivalent, Gatsby-flavored tale about time (more ambivalent than it wants to be, maybe), struggling to balance the desire to rescue what is beautiful from the past -- as the eponymous hero of "Hugo" and Oskar in "Extremely Loud & Incredibly Close" and Owen Wilson's dazed Yank in "Midnight in Paris" all want to do -- with the imperative of closing the door and moving forward, as do George Clooney's Matt King in "The Descendants" and Brad Pitt's Billy Beane in "Moneyball."

Viewed through this prism, the Oscar front-runner status of Michel Hazanavicius' "The Artist," which seems so unlikely at first glance, starts to make sense. Last spring at Cannes, when I wrote about the possibility that a black-and-white silent with an unknown star, by a French director with an unpronounceable name (roughly: ah-ZAH-na-vee-syoose), might become a hit, the only response I got from readers was derisive laughter. I didn't really believe it either, to be fair, but the alchemy of "The Artist" turned out to be unique: A lightweight but confident entertainment for adults, in a year virtually bereft of same, and a big wet kiss to Hollywood's golden age, delivered by those normally snooty, snail-eating Europeans.

Even if the psychological parable in "The Artist" was unintentional on Hazanavicius' part, it has so far proved irresistible to Academy voters. Not only is this a movie about a guy who faces a career crisis and a major economic crash and comes back, it's also about the biggest and most traumatic transformation in the history of the film business, the transition from silent movies to talkies. One might almost say the biggest and most traumatic transformation until now; today's Hollywood executives, embattled by YouTube, mobile devices, online piracy, HDTV home theater systems and the explosion of HBO-style television drama, may feel like they're living through the birth of the talkies all over again.

In other words, I think "The Artist" as an Oscar contender is a phenomenon specific to 2012. It's a nice enough little movie, but if it wins a pile of awards later this month, people may well look back at the whole thing later with some degree of puzzlement or buyer's remorse (as with, say, "Shakespeare in Love" or "Dances With Wolves"). The thing is, there's no other obvious Oscar winner amid all these lugubrious films about angst-ridden heroes wrestling with the legacy of the past, and compared to this collective depresso-fest "The Artist" feels vigorous, loaded with brio and eager to please.

If we're tempted to revert to old stereotypes of the French as a constitutionally melancholy race obsessed with their past glories, we might want to take a look in the mirror. Of the American films among this year's nominees, only "Moneyball" and "The Help" seem essentially optimistic in tone, and both are about lonely outsiders challenging the failure of conventional wisdom and pushing forward toward a more enlightened world. (The fact that one is about massive social injustice and the other is about statistical analysis and information flow tells you all you need to know about their Oscar chances.) "The Descendants" seems to have all the basic ingredients of a surefire Oscar winner -- spunky kids, a dad who cries, life lessons and beautiful scenery -- but packages them together as a series of lazy teachable moments and boozy Hawaiian postcards. George Clooney's measured, careful performance is an obvious Bill Clinton attempt to feel our pain, whereas Jean Dujardin's performance in "The Artist" is a delightful surprise.

In both "Hugo" and "Extremely Loud & Incredibly Close," preteen boys try to recover from the calamitous deaths of their beloved fathers, and pursue obscure keys to the hidden secrets of the past. While I found the first quite lovely, and the second tedious, there's little doubt that "Hugo" was an expensive folly, a personal foray into cinema history with Martin Scorsese that was too sad and strange for mass audiences. (And while Hazanavicius paid tribute to early Hollywood, Scorsese reminded us that spectacle cinema was born in Europe.) As for "Extremely Loud," I genuinely don't know who got anything from that movie or what it was; it's supposed to be a tear-jerker about 9/11 and autism and growing up fatherless and contemporary economic anxiety and race relations in New York and a bunch of other so-called big topics, but ends up instead as a mildly irritating combination of Wes Anderson shtick and afterschool special.

While Woody Allen's "Midnight in Paris" and Terrence Malick's "The Tree of Life" are flawed and idiosyncratic personal works by important directors who could hardly be more different, both stick to the grand theme of Oscar 2012: the irresistible allure of the past and the forbidding uncertainty of the future. Of course, Malick is thinking about the past of the entire universe and the future in terms of our return into that vastness after death, whereas Allen's interest in the past is limited to early 20th-century literature and music, and all he sees ahead is the final punctuation to a cruel joke. As I read the films, Owen Wilson's Gil in "Midnight" and the Malick stand-in played by Sean Penn in "Tree of Life" arrive at similar understandings of their disparate universes: The past is in us, whether genetically or cosmologically or culturally, and it always will be. But we can't live there.

Arguably that's the same pseudo-Zen lesson absorbed by Matt King and Oskar and Hugo and George Valentin, the silent-movie Ozymandias played by Dujardin in "The Artist." The days of American specialness and bigness -- whether you're talking about Cecil B. DeMille or Henry Ford or Gen. MacArthur -- are pretty much gone, and just to veer into unauthorized political commentary, voting for Tweedledum or Tweedledee in November won't bring them back. Our economy and society aren't what they used to be, and neither are our movies. Whatever wins this month will not be remembered alongside "Gone With the Wind" and "Lawrence of Arabia" and "The Godfather." Hollywood did not entirely bring this crisis upon itself, but to the extent that the Academy Awards can take the institutional temperature of America's film industry, it seems to be wallowing in self-pity and lamenting its lost past, like the characters in these films as they hit bottom. At least at the end of "The Artist," George figures out that he's got to dance for a living.