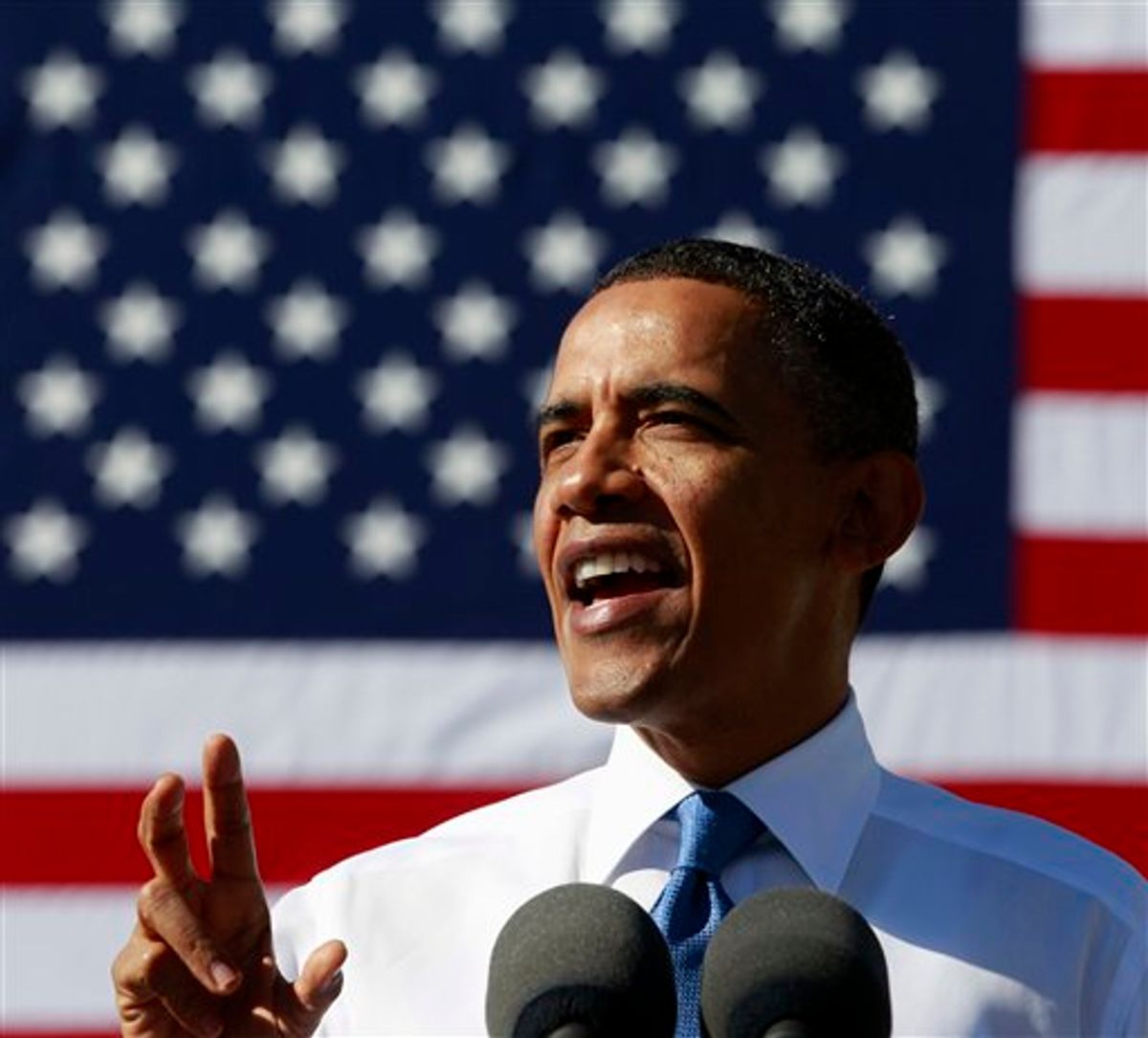 During the Bush years, Guantanamo was the core symbol of right-wing radicalism and what was back then referred to as the "assault on American values and the shredding of our Constitution": so much so then when Barack Obama ran for President, he featured these issues not as a secondary but as a central plank in his campaign. But now that there is a Democrat in office presiding over Guantanamo and these other polices -- rather than a big, bad, scary Republican -- all of that has changed, as a new Washington Post/ABC News poll today demonstrates:

The sharpest edges of President Obama’s counterterrorism policy, including the use of drone aircraft to kill suspected terrorists abroad and keeping open the military prison at Guantanamo Bay, Cuba, have broad public support, including from the left wing of the Democratic Party.

A new Washington Post-ABC News poll shows that Obama, who campaigned on a pledge to close the brig at Guantanamo Bay and to change national security policies he criticized as inconsistent with U.S. law and values, has little to fear politically for failing to live up to all of those promises.

The survey shows that 70 percent of respondents approve of Obama’s decision to keep open the prison at Guantanamo Bay. . . . The poll shows that 53 percent of self-identified liberal Democrats — and 67 percent of moderate or conservative Democrats — support keeping Guantanamo Bay open, even though it emerged as a symbol of the post-Sept. 11 national security policies of George W. Bush, which many liberals bitterly opposed.

Repulsive liberal hypocrisy extends far beyond the issue of Guantanamo. A core plank in the Democratic critique of the Bush/Cheney civil liberties assault was the notion that the President could do whatever he wants, in secret and with no checks, to anyone he accuses without trial of being a Terrorist -- even including eavesdropping on their communications or detaining them without due process. But President Obama has not only done the same thing, but has gone much farther than mere eavesdropping or detention: he has asserted the power even to kill citizens without due process. As Bush's own CIA and NSA chief Michael Hayden said this week about the Awlaki assassination: "We needed a court order to eavesdrop on him but we didn't need a court order to kill him. Isn't that something?" That is indeed "something," as is the fact that Bush's mere due-process-free eavesdropping on and detention of American citizens caused such liberal outrage, while Obama's due-process-free execution of them has not.

Beyond that, Obama has used drones to kill Muslim children and innocent adults by the hundreds. He has refused to disclose his legal arguments for why he can do this or to justify the attacks in any way. He has even had rescuers and funeral mourners deliberately targeted. As Hayden said: "Right now, there isn't a government on the planet that agrees with our legal rationale for these operations, except for Afghanistan and maybe Israel." But that is all perfectly fine with most American liberals now that their Party's Leader is doing it:

Fully 77 percent of liberal Democrats endorse the use of drones, meaning that Obama is unlikely to suffer any political consequences as a result of his policy in this election year. Support for drone strikes against suspected terrorists stays high, dropping only somewhat when respondents are asked specifically about targeting American citizens living overseas, as was the case with Anwar al-Awlaki, the Yemeni American killed in September in a drone strike in northern Yemen.

The Post's Greg Sargent obtained the breakdown on these questions and wrote today:

The number of those who approve of the drone strikes drops nearly 20 percent when respondents are told that the targets are American citizens. But that 65 percent is still a very big number, given that these policies really should be controversial.

And get this: Depressingly, Democrats approve of the drone strikes on American citizens by 58-33, and even liberals approve of them, 55-35. Those numbers were provided to me by the Post polling team.

It’s hard to imagine that Dems and liberals would approve of such policies in quite these numbers if they had been authored by George W. Bush.

Indeed: is there even a single liberal pundit, blogger or commentator who would have defended George Bush and Dick Cheney if they (rather than Obama) had been secretly targeting American citizens for execution without due process, or slaughtering children, rescuers and funeral attendees with drones, or continuing indefinite detention even a full decade after 9/11? Please. How any of these people can even look in the mirror, behold the oozing, limitless intellectual dishonesty, and not want to smash what they see is truly mystifying to me.

One of the very first non-FISA posts I ever wrote that received substantial attention was this one from January, 2006, entitled "Do Bush Followers have an Ideology"? It examined the way in which the Bush-supporting Right was more like an "authoritarian cult" rather than a political movement because its adherents had no real, fixed political beliefs; instead, I argued, their only animating "principle" was loyalty to their leader, and they would support anything he did no matter how at odds it was with their prior ostensible beliefs. That post was linked to and praised by dozens and dozens of liberal blogs: can you believe what authoritarian followers these conservatives are?, they scoffed in unison. Here was the crux of my argument:

Whether one is a "liberal" -- or, for that matter, a "conservative" -- is now no longer a function of one’s actual political views, but is a function purely of one’s personal loyalty to George Bush. . . .

People who self-identify as "conservatives" and have always been considered to be conservatives become liberal heathens the moment they dissent, even on the most non-ideological grounds, from a Bush decree. That’s because "conservatism" is now a term used to describe personal loyalty to the leader (just as "liberal" is used to describe disloyalty to that leader), and no longer refers to a set of beliefs about government.

That "conservatism" has come to mean "loyalty to George Bush" is particularly ironic given how truly un-conservative the Administration is. . . . And in that regard, people like Michelle Malkin, John Hinderaker, Jonah Goldberg and Hugh Hewitt are not conservatives. They are authoritarian cultists. Their allegiance is not to any principles of government but to strong authority through a single leader.

As this post demonstrates, long before Barack Obama achieved any significance on the political scene, I considered blind leader loyalty one of the worst toxins in our political culture: it's the very antithesis of what a healthy political system requires (and what a healthy mind would produce). One of the reasons I've written so much about the complete reversal of progressives on these issues (from pretending to be horrified by them when done under Bush to tolerating them or even supporting them when done by Obama) is precisely because it's so remarkable to see these authoritarian follower traits manifest so vibrantly in the very same political movement -- sophisticated, independent-minded, reality-based progressives -- that believes it is above that, and that only primitive conservatives are plagued by such follower-mindlessness.

The Democratic Party owes a sincere apology to George Bush, Dick Cheney and company for enthusiastically embracing many of the very Terrorism policies which caused them to hurl such vehement invective at the GOP for all those years. And progressives who support the views of the majority as expressed by this poll should never be listened to again the next time they want to pretend to oppose civilian slaughter and civil liberties assaults when perpetrated by the next Republican President (it should be noted that roughly 35% of liberals, a non-trivial amount, say they oppose these Obama policies).

One final point: I've often made the case that one of the most consequential aspects of the Obama legacy is that he has transformed what was once known as "right-wing shredding of the Constitution" into bipartisan consensus, and this is exactly what I mean. When one of the two major parties supports a certain policy and the other party pretends to oppose it -- as happened with these radical War on Terror policies during the Bush years -- then public opinion is divisive on the question, sharply split. But once the policy becomes the hallmark of both political parties, then public opinion becomes robust in support of it. That's because people assume that if both political parties support a certain policy that it must be wise, and because policies that enjoy the status of bipartisan consensus are removed from the realm of mainstream challenge. That's what Barack Obama has done to these Bush/Cheney policies: he has, as Jack Goldsmith predicted he would back in 2009, shielded and entrenched them as standard U.S. policy for at least a generation, and (by leading his supporters to embrace these policies as their own) has done so with far more success than any GOP President ever could have dreamed of achieving.

UPDATE: The Advocacy Center for Equality and Democracy documents how much public opinion has changed on these issues under (and as a result of) the Obama presidency: "under the leadership of a President who campaigned with the promise to close the facility, . . . support for the detention center may be at its highest level ever."

UPDATE II [Thurs.]: Here is what Thomas Paine, in The Age of Reason, had to say about all of this:

[I]t is necessary to the happiness of man, that he be mentally faithful to himself. Infidelity does not consist in believing, or in disbelieving; it consists in professing to believe what he does not believe.

It is impossible to calculate the moral mischief, if I may so express it, that mental lying has produced in society. When a man has so far corrupted and prostituted the chastity of his mind, as to subscribe his professional belief to things he does not believe, he has prepared himself for the commission of every other crime.

As is true for so many things, Paine grasped the crux of the matter and expressed it as well as it can be expressed.