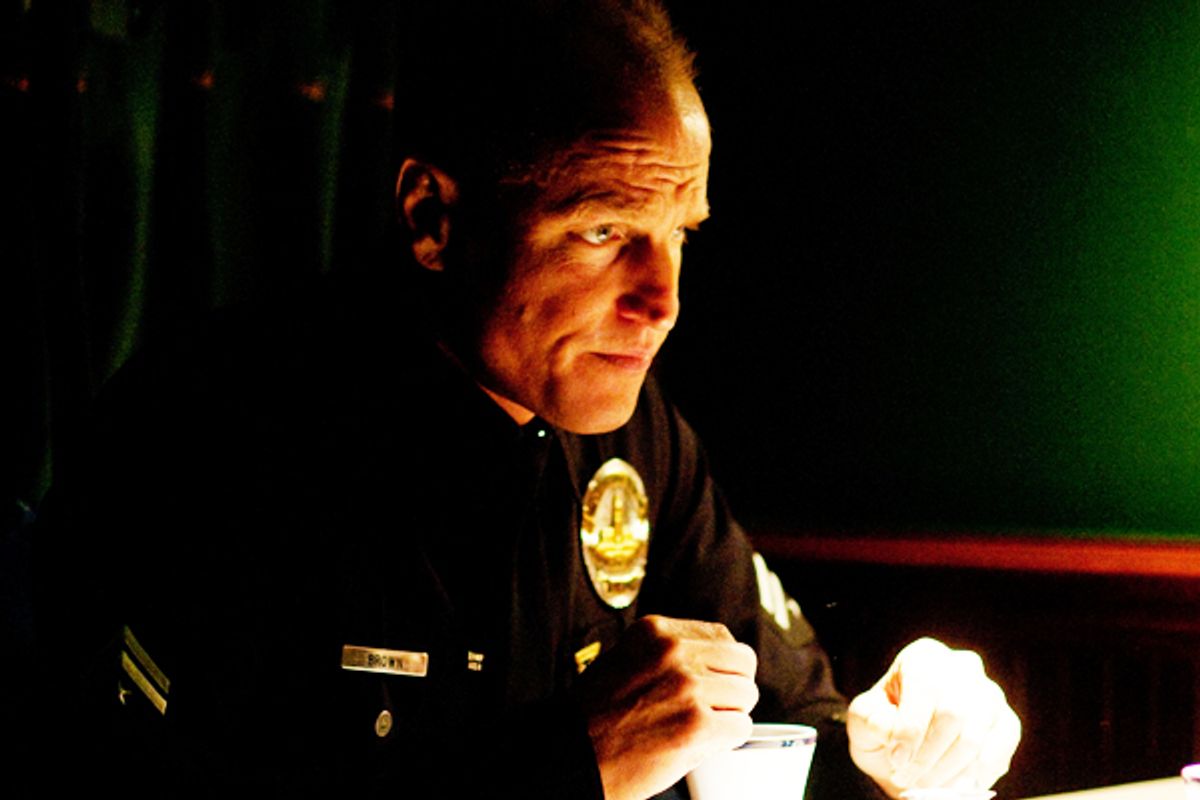 There are all kinds of reasons, good and bad, why Woody Harrelson doesn't usually play leading roles: He's not handsome in exactly the right way (although I'm confident lots of people find him sexy), he's associated with comedies and action flicks rather than romance or drama, he's losing his hair, he doesn't seem quite the right age and never did. (For the record, Harrelson is exactly the same age as George Clooney and a year older than Tom Cruise.) Another problem is that this big, loping, vulpine guy with the enormous head and the electric-blue eyes sometimes seems as if he's going to swallow the movie whole, which is what happens in Oren Moverman's intriguing indie cop drama, "Rampart." This movie's too small and too dark to have gotten Harrelson into the overcrowded best-actor race, but it's without question one of the year's great performances.

Mind you, Harrelson is one of those actors who frequently upstages his material. His performance as Justin Timberlake's ferociously gay co-worker is the only thing I can remember about "Friends With Benefits." In fact, that role deserves special mention in the pantheon of straight actors playing gay, because Harrelson makes no effort to score political points or deliver messages. It's a Woody Harrelson character, a slouchy, funny, irresistible horndog dude who chases guys rather than girls. When Timberlake's character awkwardly informs him that he'd be happy to go out drinking but he's not actually gay, Harrelson shrugs it off with an eager grin: "Means more pipe for me!"

I could go on: "Zombieland," "Transsiberian," "North Country," "She Hate Me" -- all movies that have pretty much been erased from my memory, except for the oddly sticky Harrelson moments. "Rampart" is quite a different matter, because Harrelson is in every scene of the film, and indeed almost every shot. Co-written by director Moverman (who also made "The Messenger" with Harrelson) and L.A. noir novelist James Ellroy, this is an ambitious voyage into the heart of darkness, LAPD style, that suggests both Abel Ferrara's "Bad Lieutenant" and the intense, semi-improvised character studies of John Cassavetes. Some of it's brilliant and some of it set my teeth on edge, but Harrelson gives a moving, terrifying, titanic performance as the most compelling dirty cop since Denzel Washington in "Training Day."

If you live in Southern California or have otherwise followed the Los Angeles Police Department's extensive history of corruption and abuse, you may remember the Rampart scandal of the late '90s, in which an entire anti-gang squad of 70-some cops was implicated in numerous kinds of misconduct. (Typically, no cops were convicted of anything, and only a handful were fired, but the city wound up paying out more than $125 million in the resulting civil suits.) This movie doesn't even try to tell that story, but the Rampart Division and the scandal serves as backdrop to the tale of Officer Dave "Date Rape" Brown (Harrelson), an old-school LAPD warrior who enforces a "military occupation" (his term) on the black and brown streets of East L.A.

I won't explain the origins of Dave's cop "monicker," except to say that it isn't exactly what you're thinking. (Could be better, could be worse; that's up to you.) Dave breaks the law every day and doesn't care, but hews closely to his own private version of the cop code: He's doing the "people's dirty work," and if you're a bad guy who crosses his path, you had it coming. His home life is a bewildering semi-bohemian mélange involving his current, somewhat estranged wife (Anne Heche), his ex-wife (Cynthia Nixon), who happens to be the first wife's sister, and two daughters, one of them a righteously pissed-off teen lesbian played by Brie Larson. None of this stops him from randomly hooking up with women in bars, including a steamy liaison with Audra McDonald and an even steamier one with a lying, slutty, drunken lawyer played by Robin Wright. ("You are the most beautiful woman I've ever seen," Dave tells her -- one, two, three -- "in this bar.")

As you can tell, Moverman has assembled a terrific ensemble (also included are Sigourney Weaver, Ned Beatty, Ben Foster, Ice Cube and Steve Buscemi), and the intimate, eye-level cinematography of Bobby Bukowski and staccato editing of Jay Rabinowitz create a seductive, threatening atmosphere that pushes right to the edge between realism and total head-trip. But what "Rampart" doesn't really offer is a story worthy of its tremendous antihero, who almost convinces us of his essential honor, until we notice that he's actually a sociopath inflicting pain on everyone around him. Dave gets dragged into some kind of murky, sub-"Chinatown" conspiracy, and may be the LAPD brass' designated fall guy for the entire Rampart snafu, but that's about all I understand.

But if Dave's slide into alcohol and drug abuse and worsening criminality seems a bit foreordained, Harrelson remains mind-bendingly magnetic, so much so that you'll keep rooting for Dave to straighten things out long after that's become impossible. Harrelson himself, of course, is a noted left-wing activist who would probably despise Dave Brown in real life, but that doesn't stop him from infusing the guy with unquenchable humanity and his own brand of Sinatra-style doomed dignity. Moverman is an intriguing talent who may yet make a great film; if this isn't quite it, it's still a memorable and distinctive showcase for one of our greatest actors.

"Rampart" opens this week in New York and Los Angeles, and Feb. 17 in Boston, Chicago and San Francisco, with wider release to follow.