The Grammys' most memorable moments

Adele, Glen Campbell and the Boss triumph, Whitney\'s remembered -- but what was Nicki Minaj up to? 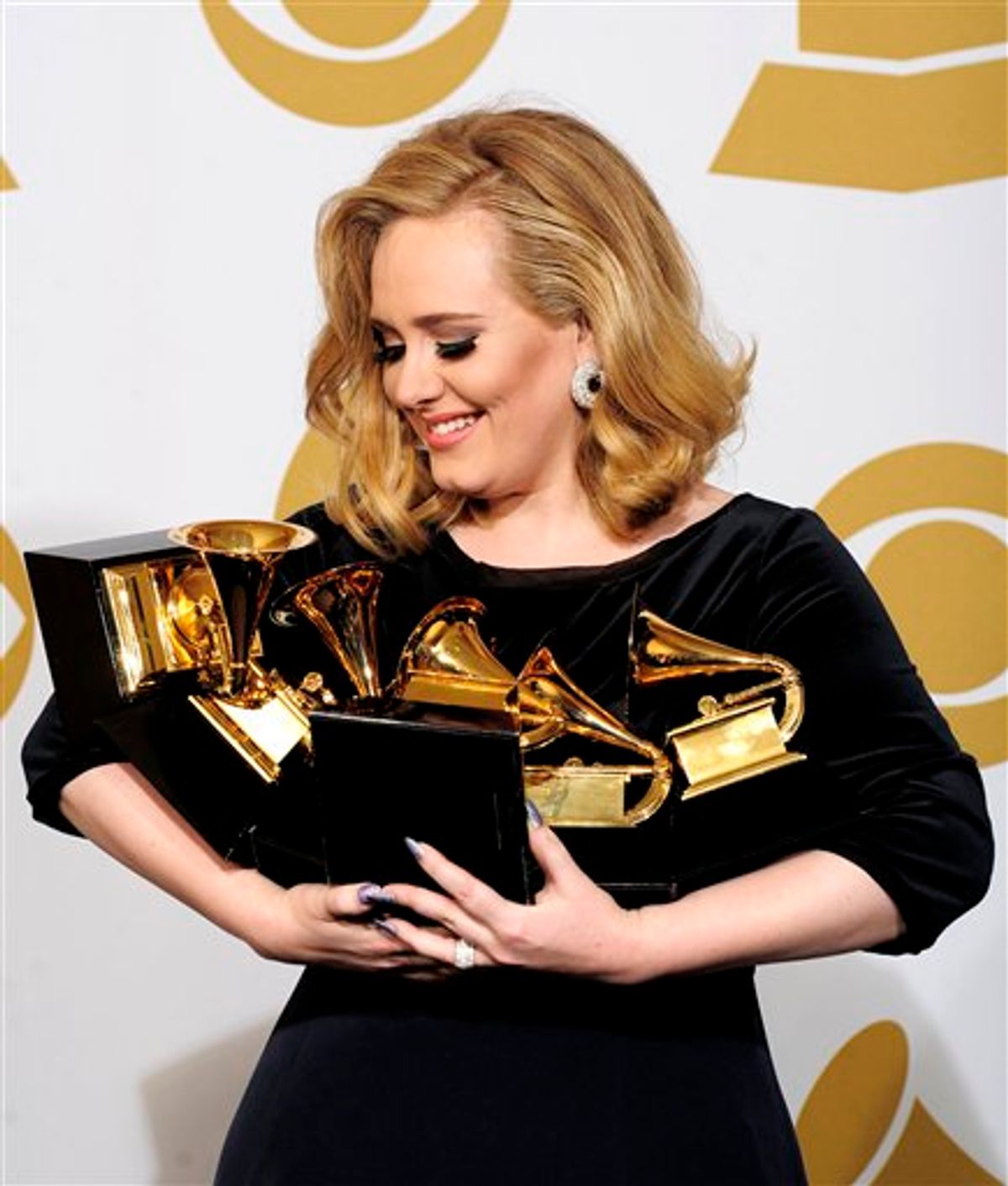 Adele poses backstage with her six awards at the 54th annual Grammy Awards on Sunday, Feb. 12, 2012 in Los Angeles. Adele won awards for best pop solo performance for "Someone Like You," song of the year, record of the year, and best short form music video for "Rolling in the Deep," and album of the year and best pop vocal album for "21." (AP Photo/Mark J. Terrill) (AP)
--

The Grammys have always trod the line between dull veneration of industry success and outrageous celebration of rock 'n' roll excess. But this year, with the losses of Etta James, Clarence Clemons, Gil Scott-Heron and Amy Winehouse, the show had an even tougher time finding the right pitch than Coldplay's Chris Martin did.

The specter of death would have hung heavily over the proceedings even if Whitney Houston hadn't died suddenly the day before. But the singer's untimely demise Saturday gave an unavoidable air of sorrow to the proceedings, a grim dose of reality that couldn't help crashing into the fantasy realm of Lady Gaga scepters and Nicki Minaj eyelashes. That's why the most memorable aspects of the broadcast weren't just the loudest or the tackiest. They were sad, they were weird, they were sometimes awful; sometimes, they were even fantastic. And they were dominated by two big-throated ladies – the troubled diva from Newark and Adele, the whiskey-voiced British blonde. And though we loved The Civil Wars' one minute of perfection and were baffled by Rihanna's "When Harry Met Sally" hair and got weepy over Paul McCartney and company's poignant and timely "Golden Slumbers/Carry That Weight," these are Salon's top-10 biggest moments of the night.

With all his trademark energy intact and backed with a massive string section, the Boss -- who lost his longtime collaborator Clarence Clemons last year – kicked off the evening with a rousing version of "We Take Care of Our Own." It was soulful, spirited and just the right touch of mournful.

Admitting that "There is no way around this -- we had a death in our family," the night's host then announced "the only thing right is to begin with a prayer … for our fallen sister." Depending on your philosophic perspective, watching the audience solemnly bow its collective head while Cool James invoked our "heavenly father" was either a moving tribute or a sudden reminder of why having an atheist like Ricky Gervais host awards shows is a cool idea. But when he cut to clip of Whitney blowing the roof off with a live performance of "I Will Always Love You" at the Grammys a generation ago, it set a bar for vocal performance that would be damn near impossible to match for the rest of the night.

Honoring the late, great Etta James, two knockout performers of different eras and genres gave a stripped-down version of "Sunday Kind of Love." It was one of the few pairings of the night that worked, a stunning moment of sincerity and finesse in an evening that often veered heavily to schmaltz.

It's not that we can expect the music industry to ignore chart-topping, domestic-abusing, frequently terrible Chris Brown. He's had a huge year, and on Sunday's broadcast, he even managed to pick up a Grammy. But aside from his historic awfulness, there's another reason to ponder whether it was really necessary to subject America to two separate performances. Decked out in his preppy "I'm not dangerous, ladies!" varsity jacket, he jumped around lip-syncing "Turn Up the Music" and "Beautiful People" with a posse of bat-winged, masked performers in a performance apparently inspired by the old video game Q*Bert early in the night, then came back near the end for a dead-behind-the-eyes "tribute to dance." At least he managed to prove that he doesn't need his abusive record to be reviled; feel free to shun him just because he sucks.

It took the powerhouse Jennifer Hudson -- who two years ago performed Houston's most successful smash for the woman herself at the BET Awards -- to take "I Will Always Love You" back from the place of power ballad clichés where it's lived the last two decades and make it ache like new. No big crescendo, no sappy orchestration, just a clearly emotional Hudson belting her heart out. Beautiful.

In an intense performance outside the Staples Center for the regular folk, Dave Grohl and company – a gang whose own experience of tragedy was brought home by that audience member thrashing around in a Nirvana shirt -- howled through a fiery rendition of their "never wanna die" anthem "Walk." Later, picking up the Grammy for best rock performance, Grohl admitted, "We made this one in my garage with some microphones and a tape machine," eloquently pleaded for "the human element of music" and promised, "It's not about being perfect." It was a shining example of old-school authenticity, only slightly undercut by the appearance, immediately after, of Ryan Seacrest.

Lifetime-achievement award winner Campbell, who last year announced he was facing Alzheimer's and would release a final album and do one last tour, is not going gently into his disease. After the Band Perry shouted uncomprehendingly through "Gentle On My Mind" and Blake Shelton did a serviceable "Southern Nights," it was Campbell himself who rocked the house. Looking undeniably unwell but in remarkably stronger voice than the likes of fellow Grammy performers Carrie Underwood or Paul McCartney, he staunchly belted out "Rhinestone Cowboy," enthusiastically coaxing the entire audience to sing along. It was by the far the greatest exhibition of bad-ass, rock 'n' roll indominability of the night.

Aw, remember when Katy Perry did the Grammys gently swaying in a trapeze swing, showing off home movies from her wedding? Sure you do; it was last year. Post-Russell Brand divorce Katy seems to have decided to go for a different vibe. Performing her new song "Part of Me," she was all about shattering glass, engulfing ice effigies of men in flames, and declaring, "You can keep the diamond ring, in fact, you can keep everything." Katy, you blue-haired, pissed-off little minx, you know what? I believe you.

The Catholic Church hasn't taken this much of a beating since Madonna's "Like a Prayer" era. In a performance of "Roman Holiday" that topped even Lady Gaga's "Alejandro," Minaj went through a confession gone wrong, an exorcism, and wound up surrounded by dancing monks getting groped by hot leather babes – all while "Oh Come All Ye Faithful" took on a whole new meaning. Did we mention she levitated? It was the closest the Grammys has ever come to turning into a Ken Russell movie.

Taking the stage after vocal surgery in November, the night's biggest winner was clearly not in as forceful voice as in her Royal Albert Hall performance of last year. But she was so clearly enjoying her triumphant night of multiple wins, pointing at herself while snarling, "You could have had this all," she personified bittersweet awesomeness. When the audience thundered to its feet, Adele's mastery of simultaneous heartbreak and victory was not just in powerful evidence, it was conspicuously infectious. And when, later, she tearfully picked up the final award of the night for album of the year, she copped both to an inspiring "rubbish relationship" and to fending off "oh my God, snot." And that is whyyyyyyyy we will always love youuuuuuu, Adele.