Our stubborn faith in aphrodisiacs

Scientists scoff at the idea, so why do we cling to age-old superstitions about sex and food? 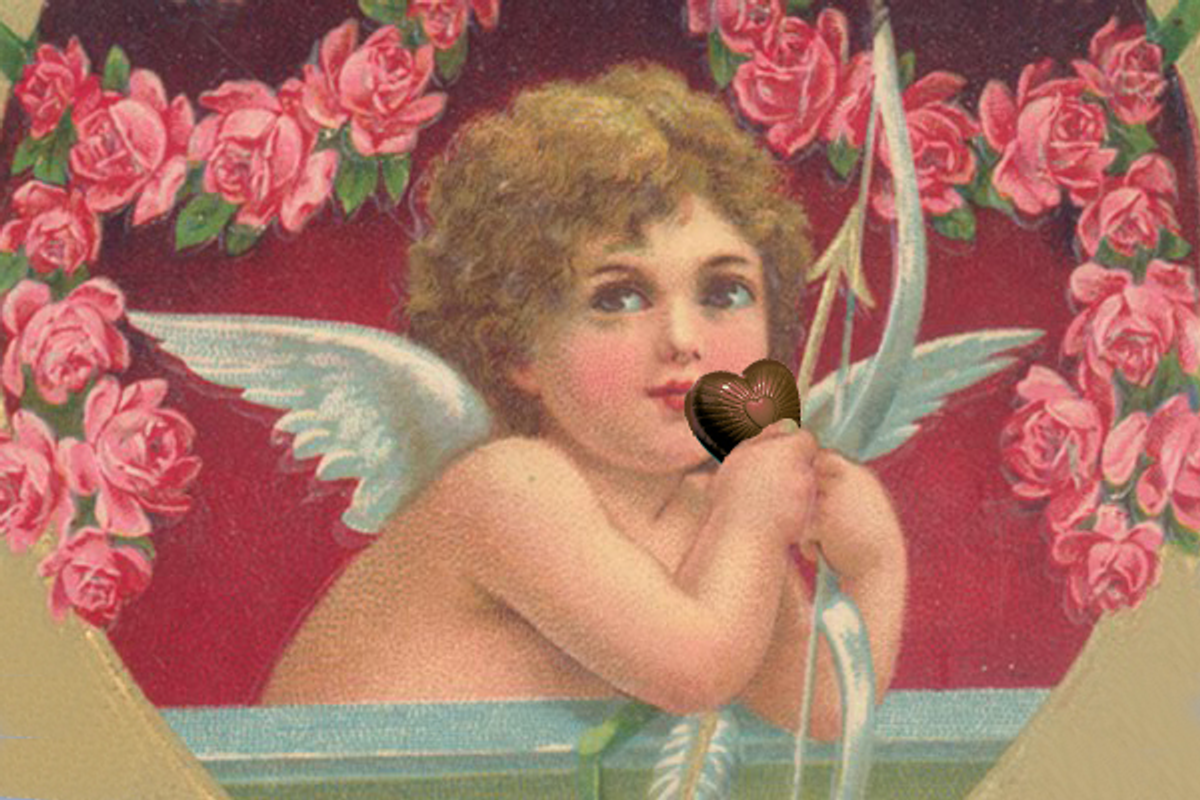 From the Garden of Eden to the oyster cellar bordellos of old New York, food and sex are entwined. Although every food under the sun has been touted as an aphrodisiac at some point in time, humans tend to get turned on by three categories of food: extremely expensive food, food that is risky to acquire, and food that resembles genitalia.

Rare and exotic foods have favored positions in the canon of culinary aphrodisiacs. Consider the truffle, the piranha and the labor of harvesting a plate full of sparrow tongues. Foods from far-off lands have the spicy whisper of perilous adventure, and there’s nothing quite like a hint of mystery to stimulate the imagination. For example, Aztec concubines taught the conquistadors to drink hot chocolate; when the Spaniards carried the exotic substance across the sea to Europe, they brought with it the rumor that the drink was an aphrodisiac. And during the reign of Charles I, when rice was still a luxury in Europe, noble Casanovas swore by the improbable aphrodisiac of rice boiled in milk and flavored with cinnamon.

As an ingredient becomes common, and thus cheaper, it loses its magic. Case in point: the potato. Your modern Brit is unlikely to find a plate of mashed potatoes sexually stimulating, but potatoes and sweet potatoes were hailed as aphrodisiacs when they were first introduced to the European palate; in Shakespeare’s “The Merry Wives of Windsor,” Falstaff reels off a list of the era’s aphrodisiacs: kissing comfits, snow eryngoes (the candied roots of sea holly), and potatoes. Once rare ingredients such as cinnamon, cloves, marmalade, rice and pepper have likewise lost their sexy status.

The second largest umbrella group of chewable aphrodisiacs is based on the crude logic that if something looks like your nasty bits, it’ll undoubtedly put your prospective partner in the mood. Thus, scheming Lotharios and temptresses have long relied on the amorous offering of edible flowers and roots. In the British Isles, wake robin (Arum maculatum) was once valued as a thickener for puddings, a starch for Elizabethan neck ruffs, and for its phallic bloom, which earned the plant a reputation as an aphrodisiac and spawned over 20 suggestive folk names, including Adam and Eve, lords and ladies, devils and angels, stallions and mares, and dog’s dick. On a similar note, the word "orchid" is derived from the ancient Greek word for testicle. Pliny the Elder recommended bulbous orchid tubers as an aphrodisiac, and the Romans called orchids "satyrion" because legend had it that the phallic roots grew from the spilled semen of a satyr.

The tribes of Mexico preferred not the root but the flower. The Totonoc Indians believed that the orchid Vanilla planifolia sprang from the blood of a goddess, and the Aztecs named it tlilxochitl, or black flower. Vanilla planifolia is an inherently romantic plant: its small blossoms open in the morning and are exclusively pollinated by hummingbirds and melipone bees. The dirty-minded Conquistadors noted the pod’s resemblance to female genitalia, and gave the plant the name vanilla, which derived from the Latin for sheath. Europeans soon prized vanilla as an aphrodisiac; wild stories circulated that vanilla could transform the ordinary man into an astonishing lover. Elizabeth I is said to have been especially fond of vanilla pudding.

Oysters and clams have had a lewd reputation since history’s dawn. The Roman author Juvenal (a nasty misogynist) uses oysters to complete his portrait of a slut partying away the night: “When she knows not one member from another, eats giant oysters at midnight, pours foaming unguents into her unmixed Falernian, and drinks out of perfume-bowls, while the roof spins dizzily round, the table dances, and every light shows double!” In keeping with the Roman talent for using food to call attention to those ultimate aphrodisiacs — wealth and power -- emperors and aristocrats turned their noses up at local oysters and sent away to the British Isles for a superior variety. The association between oysters and strumpets would have staying power: As Rebecca Stott points out in her book “Oyster,” “Throughout the seventeenth and eighteenth century, the woman oyster seller was used in poetry as a figure of erotic play, something like the oyster, to be consumed, part of the sensuous fruit of the street for the male urban voyeur.” In 19th century America, underground oyster saloons catered to base instincts — guests could slurp back dozens of oysters while cavorting with good-time girls and prostitutes; some of the seedier joints offered private rooms. A few decades later and a few hundred miles south, scantily clad ladies would shimmy in a popular striptease act called the oyster dance. In the 1940s, Kitty West (a cousin of Elvis Presley) danced on Bourbon street as “Evangeline the Oyster Girl”; to open her act, she stepped with aplomb from a giant half shell.

But food and sex also play an entwined role in more “respectable” culture. If we look at the big picture, we see food at the heart of every human ritual. As Lionel Tiger points out in “The Pursuit of Pleasure”: “The exchange of mates between families was the only process more significant for human evolution than food sharing. But it was also wholly associated with it; the wedding dinner established a circle of implication and meaning.” The Tzteltal Indians of Chiapas, Mexico, take it to the next level: in traditional families, a young married couple lives with the girl’s parents. For the first 15 days of marriage the bride and groom don’t speak to each other or sleep together. Their sole means of communication is through food. Every evening, the wife cooks a meal for her husband. If all is well on the 15th day, the couple will sleep together that night. These people clearly know their foreplay.

Our literary masters have made much of the sensual significance of food. Eve parting her lips for the fruit of knowledge may mark the most infamous sexy food metaphor, but it is by no means the only time food and sex intersect in the Bible. Half the lyric beauty of “Solomon’s Song” stems from food metaphors: “I sat down under his shadow with great delight, and his fruit was sweet to my taste”; “thy plants are an orchard of pomegranates, with pleasant fruits.” Some phrases draw a direct correlation between eating and love: Food is a gift for the beloved, and the space where the lovers meet is made more beautiful by spices and fruit: “He brought me to the banqueting house, and his banner over me was love.” Certain passages hint that food is part of the path to the boudoir: “The mandrakes gives a smell, and at our gates are all manner of pleasant fruits, new and old, which I have laid up for thee, O my beloved.” Mandrake, a poisonous root from the nightshade family, was a popular aphrodisiac during ancient times. “Solomon’s Song” also references other more tasty aphrodisiacs of the day: cinnamon, saffron, figs and pomegranates.

Food scholars and scientists tend to ignore and/or ridicule the idea of a food that functions like Viagra. The Western world’s most popular edible aphrodisiacs, chocolate and oysters, do actually create a sexy hormone rush, but generally only when they are eaten in gross quantities. As food writer Amy Reiley notes, "You're more likely to go into a diabetic coma than get that rush because you'd have to eat so much chocolate to get the effect.” Revered food historian Alan Davidson sums it up best in “The Oxford Companion to Food”: “In short, the concept of a truly aphrodisiac food is on par with that of finding a crock of gold at the end of a rainbow.”

Or maybe we persist in the belief that specific foods can lead to sex because there’s something to it. According to anthropologist Robin Fox, food leads to sex because a male’s ability to provide food plays into the female’s need to reproduce with a mate who will help nurture their young: “a male’s willingness to provide food becomes an important index of his suitability as a mate. Above all, it suggests his willingness to 'invest' in the female’s offspring.” No doubt there’s something to it, but we prefer a less clinical explanation: The act of procuring or preparing a special food can be sexy in itself. We associate food with comfort, and cooking is an act of love. By creating or acquiring a special food or beverage for a potential lover, we are creating at least the illusion of love and security, which is generally conducive to sex. In his excellent book “Heat,” Bill Buford convincingly describes the concept of cooking with love: cooking as a singularly intimate act of love one performs for friends, family and lovers. He also writes of cooking to be loved: “The premise of a romantic meal is that by stimulating and satisfying one appetite another will be analogously stimulated as well.” If you’ve ever factored a date’s restaurant choice or cooking skills into your decision to put out, you’ve experienced the aphrodisiacal qualities of food.