Diane Sawyer and Brian Ross belong in a fear-mongering museum 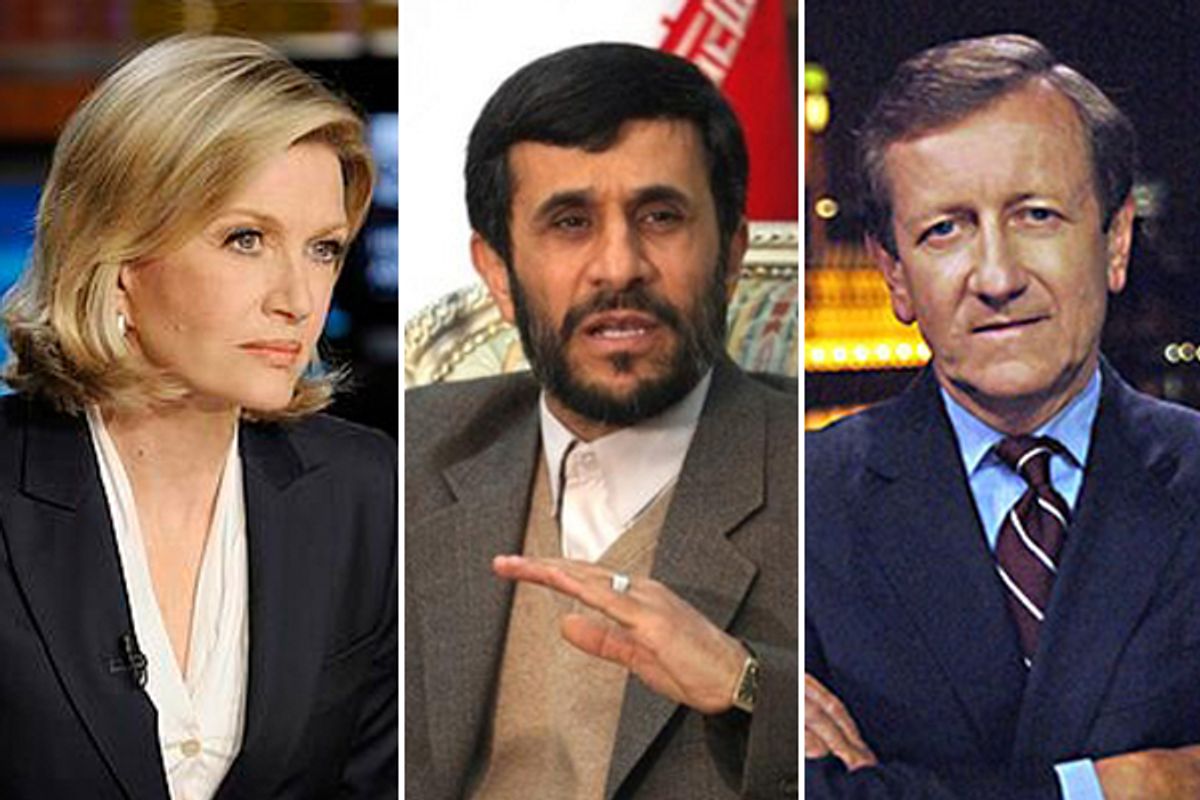 I realize I wrote extensively yesterday about the American media's typically mindless, nationalistic, war-craving hyping of The Iranian Threat -- completely redolent of what they did in 2002 and 2003 toward Iraq -- but I just saw this two-minute ABC News report from Diane Sawyer and Brian Ross that sinks to even lower depths than what I highlighted yesterday. It has to be seen to be believed. It's a perfect museum exhibit for how empty-headed American media stars uncritically recite whatever they are told by government officials, exaggerate or fabricate bad acts by the designated Enemy du Jour while ignoring and suppressing the precipitating acts of America and its client states, and just generally do whatever they can to keep fear levels and war thirst as high as possible. This is nothing short of irresponsible propagandistic trash:

Sawyer begins by warning of "a kind of shadow war being waged by Iran around the world" -- based on her blind acceptance of totally unproven Israeli accusations that Iran was behind three bombings yesterday in India, Georgia and Thailand, and without any mention of the constant attacks on Iran over the course of several years by the U.S. and Israel. After seeing video of ABC's Martha Raddatz riding on U.S. naval warships into the Strait of Hormuz, we are told by Sawyer -- echoing the warnings just yesterday from Alan Dershowitz, Ethan Bronner, and some NYPD official -- that "Israeli and Jewish facilities, including those here in the U.S., are on heightened alert," and then Brian Ross is brought in to warn that "the violence could spill over into the U.S." as "Jewish places of worship in at least ten U.S. cities have been told that they could be targets." This, you see, "follows what appears to be the increasingly violent series of attacks by Iran."

The State Department spokesperson is then brought in "to tie the incidents to Iran"; we hear her warn that "we are concerned about use of international terrorism by Iran or anyone else against Israel or any innocents." Richard Clarke is then hauled out to say that Iran is sending a signal to Israel that it can retaliate using "its terrorist network." Needless to say, no contrary information or critical sources are included: no Iranians are heard from and there's nobody to question any of these accusations. It's just one-sided, unchallenged government claims masquerading as a news report.

Note that this entire story is based on pure fabrication -- not just by accepting as Truth the Israeli and American accusation that Iran is behind these attacks, but far worse, continuously warning about Iranian attacks on synagogues and other targets inside the U.S. There is literally zero evidence that any of that is happening. The text on the website of ABC News displaying the Sawyer/Ross story expressly says: "Federal officials told ABC News that there is so far no specific intelligence of any threat to Israeli interests in the U.S." (that didn't make it into the TV broadcast). Yet here we have multiple media outlets -- including ABC -- issuing incredibly inflammatory "warnings" that Iran may launch Terrorist attacks on Jewish houses of worships and other targets on U.S. soil, all based on pure speculation and fabrication. To call that reckless is to understate the case: given Sawyer's continuous 2002-like fear-mongering, it seems much more concerted than mere recklessness. And it should all sound very familiar; from October, 2002:

Does anyone remember any of that happening? But that, at least, was merely about all the "horrific" things Saddam would do inside the U.S. if attacked; these latest reports are assertions that Iran will attack inside the U.S. even without being attacked. Meanwhile, here's a little trip down memory lane of the numerous American media outlets containing warnings that Saddam was behind attempted and actual Terrorist attacks on U.S. soil. And here's a March 9, 2003 New York Times article -- typical at the time -- uncritically repeating Bush administration claims that Saddam was harboring and tolerating all sorts of Al Qaeda Terrorists inside Iraq.

But the most destructive part of this state-subservient journalism is how it completely suppresses the actions of the U.S. and Israel that have precipitated all of this. While we are warned of Iran's "terrorist network" and the "shadow war being waged by Iran around the world," there is (other than a fleeting reference by Ross to the killing of Iranian nuclear scientists) no mention, as usual, of the multiple acts of aggression by the U.S. and Israel aimed at Iran nor the endless stream of threats made to attack that country. The U.S. media eagerly depicts Iran as the latest Saddam -- some sort of maniacal, aggressive regime that, for some strange and inscrutable reason, continuously engages in Terrorism and poses threats to the U.S. and Israel without any provocation or cause -- all in service of depicting the U.S. and Israeli Governments as the peaceful victims defending the world from all that is Bad, and its designated Enemies as the root of all evil.

In other words, the American media is doing what it always does in these cases, which is precisely why Diane Sawyer and Brian Ross should have a museum exhibit devoted to their behavior here. The only surprising part of any of this is that they do not seem to believe that they even need to pretend to be doing anything different than what they did in 2002 and 2003. They seem perfectly comfortable making it as clear as can be that they are reading from the exact same script.

UPDATE: It's important to note that Iran has some concerns of its own about other nations' nuclear programs.