When sexy ads cross the line

An airline uses its sexy stewardesses as a selling point, and flies decades back in time 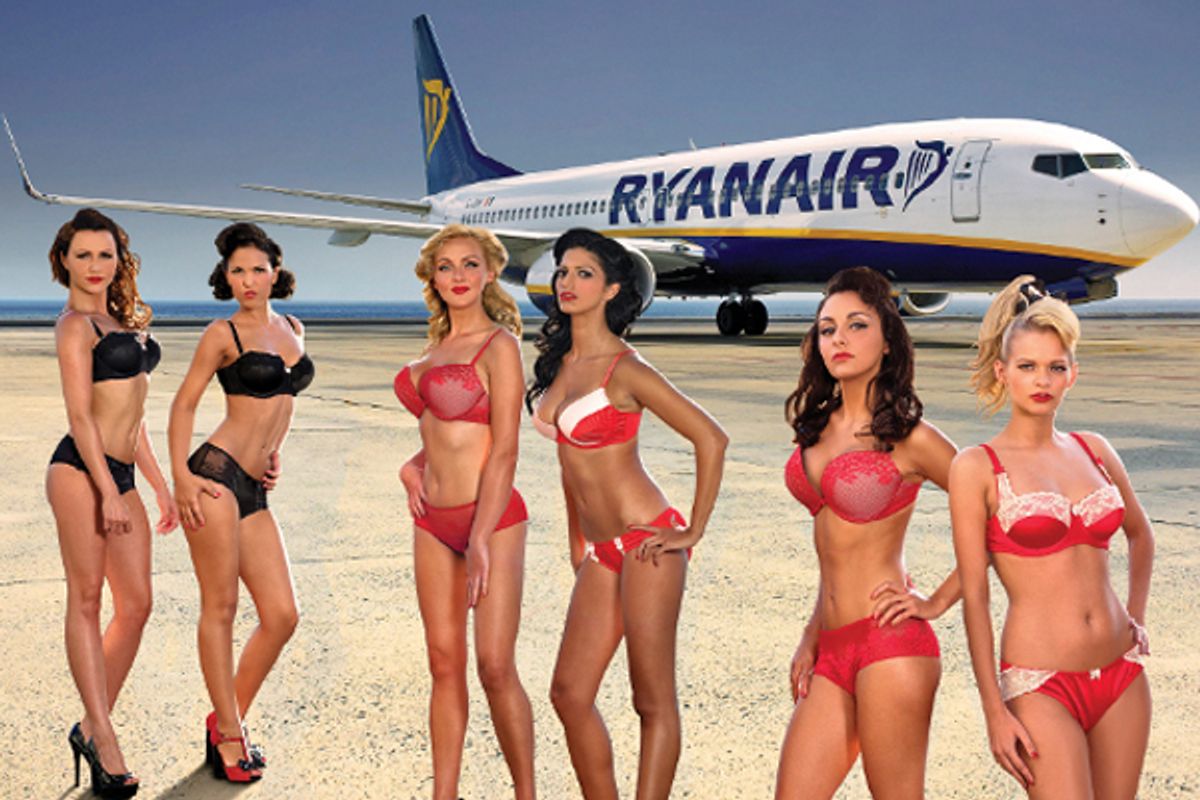 Bring on the sexy stews! On second thought, let's not.

This week, the British Advertising Standards Authority yanked an ad campaign for discount airline Ryanair that featured lingerie-clad flight attendants and promised "Red Hot Fares & Crew." The ads, which the ASA deemed "sexist" and "demeaning," were inspired by Ryanair's popular charity calendar, which features sexy stewardesses vamping around in swimsuits and provocatively demonstrating how to inflate a life vest. Somehow, it was funnier when Julie Hagerty did it in "Airplane!"

The print campaign, launched last fall, included a plea to purchase the calendar. But the bolder message, using pretty girls tugging on their panties as a means of persuading customers to nip off to Düsseldorf, was instantly contentious, prompting complaints to the ASA and a petition campaign. Of course, beautiful girls in very little clothing are used all the time to peddle everything from beer to car to sandwiches to domain-name businesses. That's the nature of advertising.

Why did this campaign attract protest? Because there's a huge difference between selling a product and selling a service. When you see an ad for diet soda, you understand that Sofia Vergara is not included. An ad that boasts of an airline's "hot crew" and presents its staff in its underwear says something else. It takes something that was perhaps considered sexy and fun in one context – a calendar – and exploits it, making that allure seem part of the staff's job duties. Or to put it another way, firefighters have a calendar too, but that's not really their biggest selling point when they're extinguishing the raging inferno that used to be your house.

This isn't Ryanair's first time in the advertising standards doghouse. In 2010, the airline had to pay damages and publicly apologize for depicting the founder of a competing airline as Pinocchio. And in 2008, the company caught flak from the ASA for promising its "hottest back to school fares" with the image of a naughty, miniskirted schoolgirl. Ryanair, the official airline of Neanderthals, shot back by calling the ASA a "bunch of unelected self-appointed dimwits."

In a change.org petition by "Cabin crew against sexism" that garnered over 11,000 supporters, a flight attendant named Ghada explained, "I'm a member of an airline Cabin Crew and what's more I love my job. My work colleagues, many of whom are male, work hard with me to ensure the safety of our passengers. Safety is our No. 1 priority, not the brand of our underwear. Ryanair needs to have these types of adverts banned. We have come a long way from seeing women purely in a sexual way as opposed to a professional way."

We have, indeed, come a long way from an era when a woman was considered something to be boarded and flown. But the fantasy of hot babes there to dispense tiny bottles of alcohol and provide eye candy all the way to Barcelona is a persistent one. It's also pretty comical, as anyone who's ever flown knows. Modern air travel isn't sexy. Just getting to your destination without delay or a cavity search is an achievement. Forget the "hot crew"; most airlines won't even give you a bag of pretzels anymore. And when it comes to taking flight attendants and their jobs seriously, why use an airline that's clearly got miles and miles to go?