Pick of the week: Escape from Putin's cult

Pick of the week: Inside the creepy groupthink of the Russian president's proto-fascist youth movement 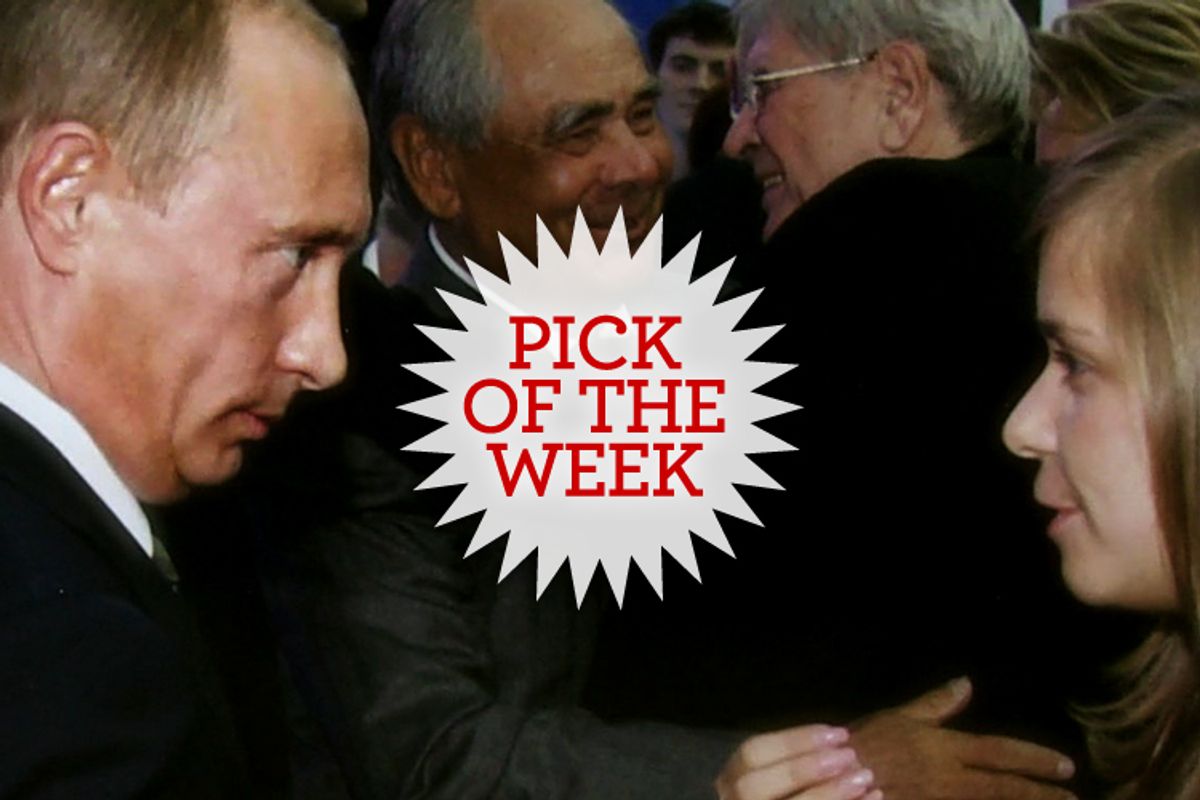 Vladimir Putin, Russia's president turned prime minister (turned president again, probably) likes to say that his country has developed a "special democracy" or "sovereign democracy" in the 21st century. As an opposition politician observes in Danish director Lise Birk Pedersen's film "Putin's Kiss," that's a little like a store owner claiming to sell somewhat fresh fish. It either is or it isn't, and Russia's version of democracy doesn't pass the smell test. (Please note, foreign readers, that I'm not holding my own country's political system up as some shining example. But it's still true that I can write what I want to about Obama or Romney or anybody else without being beaten half to death.)

For anyone eager to understand Russia's depressing 20-year slide from one version of cynical totalitarianism into another, with a brief stop-off in between for giddy, wide-open, largely dysfunctional democracy, "Putin's Kiss" is required viewing. Of course Pedersen can't explain all the conundrums of contemporary Russia in 85 minutes, but in profiling two singularly important young Russians -- pro-Putin youth activist Masha Drokova and leading opposition journalist Oleg Kashin -- she captures some essential drama in the nation's recent political life. (If you read Russian, Kashin's site is here.)

Born at the tail end of the Soviet era, Drokova was a fresh-faced teenage girl from suburban Moscow when she suddenly became famous in the mid-2000s after giving Putin a worshipful smooch on national TV. She assured interviewers that she could tell he was a strong, charismatic and kind man, and that whomever she spent her life with would have to follow his example. Poised and pleasant, pretty without being drop-dead Natasha gorgeous, Drokova rapidly became a major public face of Nashi, the "anti-fascist and democratic" youth organization founded by prominent Putin supporters to channel adolescent energy and quell dissent.

As opposition leader Ilya Yashin tells Pedersen, Putin's regime grew increasingly restless and paranoid after the 2005 "Orange Revolution" threw the post-Soviet autocrats out of power in neighboring Ukraine. (Arguably, the Orange Revolution has itself been largely undone by current Ukrainian President Viktor Yanukovych, but that's another story.) Nashi was initially led by shadowy Putin lieutenant Vasily Yakemenko, perhaps operating at the behest of Vladislav Surkov, a guy who seems like a boring, puffy-faced Kremlin apparatchik but is widely described as the "gray cardinal" or ideological puppet-master behind Putin's regime. (At the risk of derailing this whole review, the more you read about Surkov the weirder he gets. He may have written or co-written a satirical novel making fun of the system he helped create, and reportedly has portraits of Che Guevara and Tupac Shakur, alongside Putin, in his Kremlin office.)

As we see from Pedersen's often chilling footage inside Nashi rallies and summer camps, Surkov and Yakemenko created a two-faced organization on a familiar and unfortunate 20th-century model, one part calisthenics and canoeing classes and ritualized teen romance, one part ultra-nationalist ideology. Older Russians of course liken it to the Soviet-era Komsomol, by all accounts one of the communist state's more successful endeavors. Other people have simply started calling it the "Putinjugend" (a reference to the German name of the Hitler Youth). At any rate, saying that the group is pro-democratic and anti-fascist doesn't make it so; Nashi has frequently been used to humiliate and harass opposition politicians, journalists and human-rights activists, and is at least circumstantially connected to racist violence against Chechens, Georgians, Armenians, Azeris and other minority groups.

Nobody knows for sure -- or nobody who's talking -- whether it was Nashi activists who beat Oleg Kashin into a coma in the fall of 2010, breaking both his legs and both his jaws, after he wrote a series of investigative pieces critical of Putin's business dealings. And nobody knows exactly who the two guys were who took a crap on top of Ilya Yashin's car, right on a Moscow street. (We see both incidents, via grainy surveillance footage. Russia is just that kind of place.) The ingenuity of the political system engineered by Surkov lies precisely in the fact that orders to quash the opposition often don't have to come from the top, and the people in power can pay lip service to freedom and democracy and wring their hands over violent incidents. Unlike in Soviet times, dissent is not illegal, and it's tolerated as long as it stays limited to marginal political parties and elite Moscow publications. But it isn't good for your health or your public reputation.

Nobody suggests that Masha Drokova had anything to do with the dirty side of Nashi. She was the organization's happy face, giving speeches against official corruption, hosting a pro-Putin talk show and leading demonstrations against supermarkets that sold expired meat. But as her mentor-protégé relationship with Nashi founder Yakemenko becomes more troubled and she gets to know Kashin and other liberal journalists, this naive but likable young woman visibly begins to struggle with the cognitive dissonance of contemporary Russian political life. No one could accuse "Putin's Kiss" of painting an encouraging portrait of Russia, but there are some signs that the opposition has been revitalized, and Drokova's story of apostasy is one small part of that. Ilya Yashin laments the way that Nashi has turned an entire generation toward conformity and cynicism, but it was idealism that made Masha kiss Putin in the first place, and that same idealism made her walk away from him.

"Putin's Kiss" opens this week at Cinema Village in New York, with more cities and home-video release to follow.