At the height of the Cuban Missile Crisis, the president embraced anti-nuclear war rhetoric, a new book claims 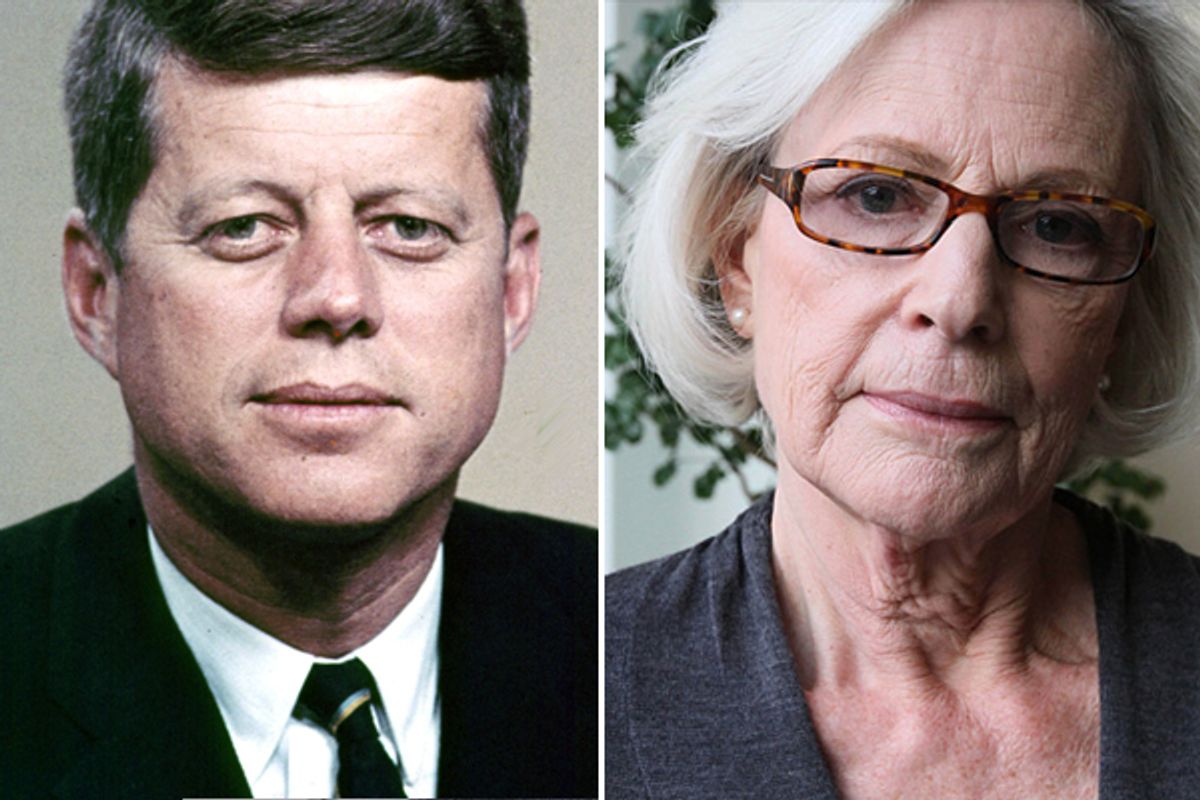 In his charmed life, he seduced young women in the White House with ruthless ease. In his violent death, he plunged the American government into a crisis of confidence whose effects are still visible 50 years later.

How President John F. Kennedy lived and died still has the power to set tabloid hearts aflutter, while providing a rich lode of material for those interested in the inner workings of the American national security state.

But first, the sex. In June 1962, Mimi Alford was a 19-year old freshman from Wheaton College who had an internship at the White House. Within four days of meeting her, JFK took her on a tour of the White House, maneuvered her into a bedroom, undressed her, and made love to her "as if it was the most natural thing in the world."

Now, a half century later, Alford has written a book called "Once Upon a Secret," which the New York Post touted as a book by "JFK's teen mistress." That's a great headline for 1963, but more than a little misleading in 2012. Now 69 years old, Alford is a mother and grandmother living in New York who wants to unburden herself of a secret of which she was both proud and ashamed. She writes not to titillate but to understand her life, and her candid account is all the more credible for it.

Alford's story of her 18-month affair with JFK is corroborated on many key points. Barbara Gamerekian, a former White House aide, gave an oral history in which she talked about Kennedy's many lovers, including one named Mimi. When a New York Daily News reporter contacted her in 2003, she reluctantly admitted the affair. Her account dovetails with other histories of the Kennedy administration; JFK biographer Robert Dallek told MSNBC he thought Alford's story is "quite credible."

Along with Nina Burleigh's excellent 1998 book "A Very Private Woman," about Mary Meyer, a Washington artist who was perhaps JFK's most significant Other Woman, "Once Upon a Secret" sheds more light on an aspect of JFK's presidency that is both sensationalized and trivialized. While traditional historians dismiss these relationships as merely sexual, exploitative, risky or compulsive, they were obviously central to JFK's self-image as a man. They revealed aspects of his consciousness and desires that he could not share with family, friends or the public. In Alford's story, we glimpse a truth denied by admirers and critics: JFK was libertine in his morality and liberal in his impulses.

Alford's story matters because she spent time with JFK on perhaps the single most important day in his presidency. It came in late October 1962 during the Cuban Missile Crisis. The U.S. had discovered that the Soviet Union secretly installed nuclear missiles in Cuba to defend the revolutionary government of Fidel Castro. Most of JFK's national security advisors -- and all of the Joint Chiefs of Staff  -- recommended JFK order the invasion of the island to destroy the missiles and overthrow the impudent Castro. JFK, a war hero, resisted. He accepted the lesser measure of a Naval blockade of the island while searching for a diplomatic solution.

Alford, back at school in Massachusetts, evokes the dread of those days when the world stood on the brink of nuclear war,  an "atmosphere of deep concern in some quarters and outright hysteria in others. We were warned about a national shortage of bomb shelters. We were besieged with apocalyptic estimates of how many people would die in a nuclear exchange." No doubt seeking diversion from the burdens of office, JFK invited her to Washington. (He'd sent Jackie Kennedy and his children out of town.)

When Alford arrived at the White House on Oct. 28, 1962, Dave Powers, JFK's personal aide, told her that the president had just sent a message to Moscow asking, for the last time, that the missiles be removed. Many thought war would start within 48 hours.

"Normally, he would have put his presidential duties behind him, had a drink and done his best to lighten up the room," Alford recalls. Instead, JFK paced, contemplating whether he would soon have to make a decision to send thousands, if not millions, of people to a violent death.

At one point, after leaving the room to take another urgent phone call, he came back shaking his head and said to me, "I'd rather my children be red than dead." It wasn't a political statement or an attempt at levity. These were the words of a father who adored his children and couldn’t bear them being hurt.

If true, it's a telling comment. JFK was echoing a popular slogan of the peace movement of the 1960s: "Better red than dead." The idea was anathema to the American right but common on the left in Europe: It would be better to live under communism than to die in a nuclear war. At the climactic moment of the Cuban missile crisis, Alford says JFK voiced this sentiment.

Some will say Alford's story cannot be true because JFK was not a leftist but an anti-communist — but there's nothing unusual about a politician having different views publicly and privately. Others may say Alford made up the story to sell books -- as if an anecdote about JFK's liberalism would entice readers interested in his libido. In the context of the crisis at hand, it is more plausible to think that the president was expressing an abhorrence of the nuclear terror that defined the Cold War and voicing a desire to escape its clutches as his advisors pressed for war.

The next morning Mimi returned to school, after waving goodbye to JFK while he was on the phone. Within an hour, the White House received a message from the Soviet leadership. The missiles would be removed. Without JFK's restraint, most historians now agree, the U.S. would have found itself engaged in a land war in Cuba and quite possibly a nuclear war. The public welcomed the peaceful solution, but many in the Pentagon and the CIA thought JFK had squandered an opportunity to get rid of Castro. Air Force Chief of Staff Gen. Curtis LeMay, a belligerent right-winger who hated Kennedy, called the resolution of the missile crisis "the greatest defeat in our history."

In the crisis' aftermath, JFK moved left in his foreign policy. He publicly downplayed the Cuban issue, leading to feelings of betrayal in the upper ranks of the CIA. It is true that JFK privately authorized his brother Bobby to organize an alternative anti-Castro leadership independent of the Agency, but that only inspired contempt in Langley. In June 1963, JFK gave a speech at American University calling for the end of the Cold War, which inspired even more loathing on the right.

Alford's book makes clear that JFK's hunger for women was well-known to many in the White House. Burleigh's book makes clear that his promiscuity was also well-known to his enemies, not the least of whom was James Angleton, the chief of the Agency's counterintelligence staff. Angleton was a brilliant and paranoid man who loathed JFK's Cuba policy and knew of his affair with Mary Meyer. She was the ex-wife of Cord Meyer, another senior Agency official with whom he worked closely. (Angleton "knew Cord pretty well," said retired CIA officer Howard Hunt, who knew both men.)

It may be coincidence, but in the course of 1963, Angleton's office was regularly informed about the travels, activities and political activities of an itinerant ex-Marine named Lee Harvey Oswald. As I documented in my 2008 book "Our Man in Mexico," this information was not (per the CIA myth) considered "routine"  but was channeled to Angleton's trusted aide, Jane Roman. When the CIA's Mexico City station reported in October 1963 that Oswald had visited the Soviet Embassy there, Roman and others in Angleton's office sent a deceptive cable to other U.S. agencies saying the CIA had learned nothing about Oswald's activities since May 1962. (Roman acknowledged her role in writing this inaccurate memo in this 1994 interview, which I first reported in the Washington Post.)

Mimi Alford saw JFK for the last time on Nov. 15, 1963. On a visit to the White House, she told him she was engaged to her college boyfriend.

“He took me in his arms for a long embrace and said, ‘I wish you were coming with me to Texas.’ And then he added, ‘I’ll call you when I get back.’ I was overcome with sudden sadness. ‘Remember, Mr. President, I’m getting married.’

A week later, JFK was riding with Jackie in a motorcade in downtown Dallas when gunshots rang out. Kennedy was struck in the back and the head and died within an hour. Oswald was arrested for the crime, then murdered while in police custody. Suspicions of a conspiracy flared immediately and have never gone away, despite the claims of major news organizations and some historians. For many scholars and most Americans, the preponderance of evidence indicates that others were involved in the Dallas ambush, though no conspirators have ever been identified beyond a reasonable doubt.

In her grief over the murder of her lover, Alford confessed the affair to her fiancé. He felt hurt and humiliated and she felt a shame she could not voice; they eventually divorced. She says she wrote the book so her daughters would know the full story of her life.

Mary Meyer was not so fortunate. In April 1964, she was shot and killed by homeless man as she walked along the C&O canal in Georgetown, the victim of what seems to have been a random street crime. Jim Angleton immediately went to Meyer's house and seized (then later destroyed) her diary, which detailed her romance with the late president. The canny spymaster knew full well that the details of JFK's relationships with other women were politically sensitive and historically important. Mimi Alford's brave book confirms the point.