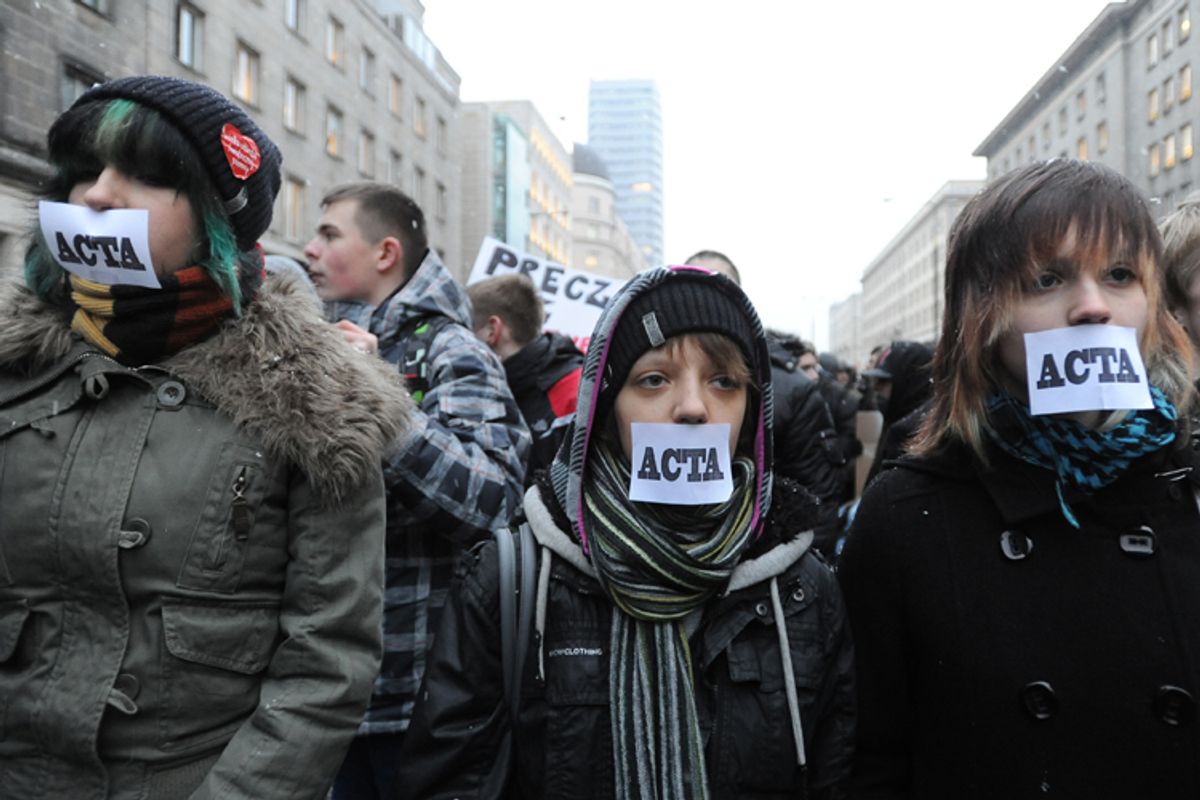 "I will not take part in this masquerade," wrote the European Union's special rapporteur for the Anti-Counterfeiting Trade Agreement, as he tendered his resignation last month. Since then, opposition to the international pact on so-called intellectual property has swelled. The popular fervor that thwarted the Stop Online Piracy Act in the United States has gone global.

Thousands marched in the streets of Europe last weekend, with protests reported in Budapest, Paris, Prague, Vilnius, Transylvania and beyond. Bulgaria has pulled out of the process of signing ACTA, as the agreement is known. Latvia has called for greater consultation. Poland has suspended its involvement. And Germany is holding off, as are the Czech and Slovak governments.  Hollywood had expected a neat and tidy ending to the years-long negotiation of a new global copyright regime. What it has gotten is something as complex as a Fellini film.

How did we get here? In 2007, the United States, along with Japan, Switzerland, Canada, Australia, New Zealand, Singapore, Korea and the 27 EU member countries began, in near total secret, to work out a policy on piracy and bootlegging that would stand separate from existing international trade bodies. The hope was to synchronize enforcement against counterfeit goods, from knockoff Viagra to black-market electronics to faux Nike sneakers.

But as the world has gotten a peek at ACTA over the years, it's how the agreement would govern the Internet that has gotten the most attention. The agreement has raised concerns that travelers will have their laptops and MP3 players searched at border crossings for illicit copies of movies or music, or that Internet service providers will be forced to crack down on customers suspected of using their bandwidth to trade files.

"I don't know where it comes from and how it originated," said Lithuania's justice minister, "but I don't like that this treaty was signed skillfully avoiding discussions in the European Union and Lithuania."

In real part, where it has come from is Hollywood, as well as the movie industry's baby brother, the U.S. recording industry. Over the years, those industries have pursued two tactics in their copyright crackdown, one local, one global. Domestically, the Motion Picture Association of America has pushed SOPA and its companion, the Protect IP Act. Globally, there is ACTA. That international agreement could get done on the world stage not only what MPAA has achieved in Washington, but some of what it hasn't been able to push through in the United States

Both at home and abroad, critics have argued that Hollywood's vision of an Internet -- one where it is empowered to hunt down violators -- cares far more about protecting copyright than it does about protecting the public's ability to freely associate and communicate online. But as unsettling as that might sound to those of us in the United States, it can be downright terrifying in places where fears of totalitarianism and surveillance are fresh and real. Culture doesn't always translate, on-screen or off. Secretive cross-border agreements hit the ear differently in Vilnius, or Berlin, or Warsaw. Add to that the fact that the Internet is seen as a refuge, a place where the people stand a chance of countering the shadowy ways of government, and the resistance to ACTA we're seeing in Europe isn't surprising.

ACTA's negotiators, for their part, reject the way that the agreement has been framed. Existing trade agreements like the World Trade Organization's TRIPS agreement pre-date the Internet, they point out. Karel De Gucht, the European Commissioner for Trade, insists that ACTA's real target is "large-scale illegal activity, often pursued by criminal organizations."

But, as with SOPA and PIPA, the issue here isn't just the substance of the policy. It's who was writing it, and how they were doing it. For a long while, the little that was known about the drafting process came through a WikiLeaks leak. In that vacuum of information, the focus turned to what looked for all the world like Hollywood's hijacking of what may well be a necessary global conversation about counterfeit goods.

"Unfortunately for these guys," wrote Public Knowledge's Harold Feld, "whenever there is an international trade agreement negotiation, Hollywood jumps in, takes over, and starts driving the crazy train off a cliff by demanding all kinds of nonesense [sic] in the name of 'stopping piracy.'"

If ACTA is SOPA and PIPA writ international (and it is, in spirit if not in enforcement mechanisms), then what is fascinating to notice here is how the catalyzed reaction against ACTA across Europe mirrored that inter-government agreement: It has been a networked response. Surely, there have been major players. The hacker collective Anonymous has played a role. So has the Pirate Party, a tech-minded political party that started in Sweden and has spread across Europe. But there are millions more individuals who have made themselves heard. Anti-ACTA sentiment has spread nearly virally across the continent.

The Internet is beginning to level the political playing field. The Motion Picture Association of America boasts offices in 30 countries around the globe. That has long been to its considerable advantage. But, as with SOPA and PIPA, Hollywood's political arm is finding that the kids and not-so-young people rallying online and in the streets are proving to be, in the aggregate, at least, formidable foes.

And each of those rallies, each public demonstration -- in Budapest or Prague or New York City -- over a copyright bill makes it harder to believe Hollywood's long-told tale: that the only ones who don't want their copyright regime are hardcore digital pirates driven by a desire to get music and movies for free. It's getting difficult to ignore the fact that this particular story might be a little more complicated than that. There's more to the free flow of online information than piracy. That much this winter's wired political protests have made plain.