The GOP savior that will never come

If Mitt melts down, the GOP won't have a white knight to ride to the rescue 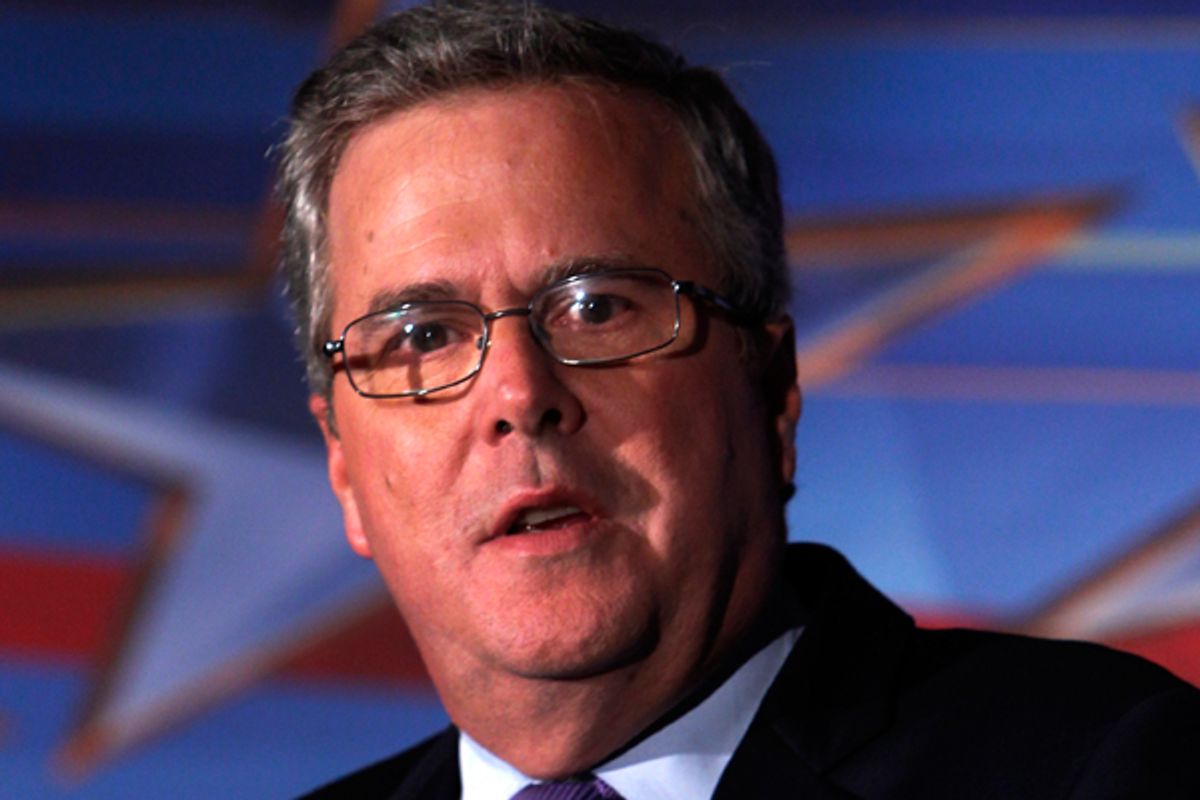 The next round of Republican primaries will take place one week from today, and the possibility that Mitt Romney will suffer a total wipeout can't be ruled out.

This is not to over-dramatize the situation. Romney remains favored to prevail in Arizona (where delegates are awarded on a winner-take-all basis) and he's within striking distance of Rick Santorum in Michigan. Factor in his (and his super PAC's) ability to saturate each state's airwaves at will and his previous success at neutralizing rivals who've emerged to serious threats, and it's not hard to see Romney winning both contests next Tuesday, thereby reasserting himself as the clear favorite for the nomination.

But the fact remains that Romney has trailed in every Michigan poll taken recently, with the newest numbers from Public Policy Polling putting him 4 points behind. And his edge over Santorum in the most current Arizona survey is just 3 points, even though Santorum hasn't put up much of a fight in the state. With Santorum now opening a double-digit lead nationally and with a pivotal debate set for Wednesday night, it's absolutely possible that Romney will fall short in his native state, Michigan. And it's not impossible, though far less likely, that he'll lose in Arizona as well.

This is why there's suddenly loud talk about a new candidate jumping into the GOP race. If Romney melts down, Santorum looms as the next most likely victor -- and his white hot culture war rhetoric these past few days is a perfect demonstration of why most November-minded Republicans believe his nomination would be a disaster. And after Santorum comes Newt Gingrich, whom those same Republicans tend to regard as poison, and then Ron Paul, who's a nonstarter. As an unnamed Republican senator told ABC News late last week, “If Romney cannot win Michigan, we need a new candidate."

But while the GOP's need for a savior would be obvious, don't count on one emerging in the event of a Romney meltdown next Tuesday. There are four major reasons why:

1. There just isn't one. It's been obvious since early last year that there was room for another candidate in the race, one capable of exciting the GOP's Tea Party base while earning and maintaining the approval of the party's opinion-shaping elites. This is easier said than done, as Rick Perry painfully demonstrated. The three most commonly mentioned white knights are Jeb Bush, Mitch Daniels and Chris Christie, but each has ideological baggage of his own; whether any is actually what the base is looking for is an open question. And after them, who is there? At this very, very late point, any new candidate would need to demonstrate wide support immediately. There just aren't many -- or any -- Republicans who could do this.

2. It's gotten too complicated. But let's say that Jeb or Chris or Mitch (or whoever) wanted to get in anyway. We've long since passed the point at which a new candidate would be able to qualify for enough state ballots to have a shot at securing a delegate majority during the primary season; so the only hope for a white knight now would be to get on the ballots he (or she) could, hope to secure enough delegates to keep any of the other candidate from gaining a majority, then take a shot at a deadlocked convention. In other words, even if the new candidate caught fire and won some late primaries, securing the nomination would still be a difficult, maybe even impossible, task. Bush, Christie and Daniels will all still be viable in 2016 (if the GOP nomination is open then) and already decided not to run in 2012, back when the path to the nomination was much clearer than it is now. They'd each have an enormous amount to lose by making a last-minute stab at this year's prize.

3. What about the guy who's already running? The white knight talk is based on an assumption that Romney would be mortally wounded by a loss in one or both states next week, and maybe he would be. But what would happen to Santorum if he won one or both? He's already climbed into the mid- to high-30s in national GOP polling and demonstrated an ability to connect with the conservative base. Slaying Romney would probably make him a rock star on the right -- and would make it easy for him to stoke resistance to any new candidate, whom he could portray as the tool of a desperate, soulless establishment.

4. The GOP nomination isn't quite what it looked like before. President Obama's political standing has markedly improved in the past few months, likely a combination of good economic news and negative headlines about the GOP race. His gains are tenuous and could easily be wiped out if the recovery stalls in the months ahead, but if they continue, the GOP nomination this year could end up being as valuable as it was in 1996, when Bob Dole never stood a chance against Bill Clinton. This is all the more reason for ambitious Republicans who are on the sidelines now to stay there and wait for '16.

Again, the talk of a new candidate will die down if Romney can right his ship and fend off Santorum in Michigan and Arizona. But even if he doesn't, here's betting it still won't amount to anything.