The men who own the GOP 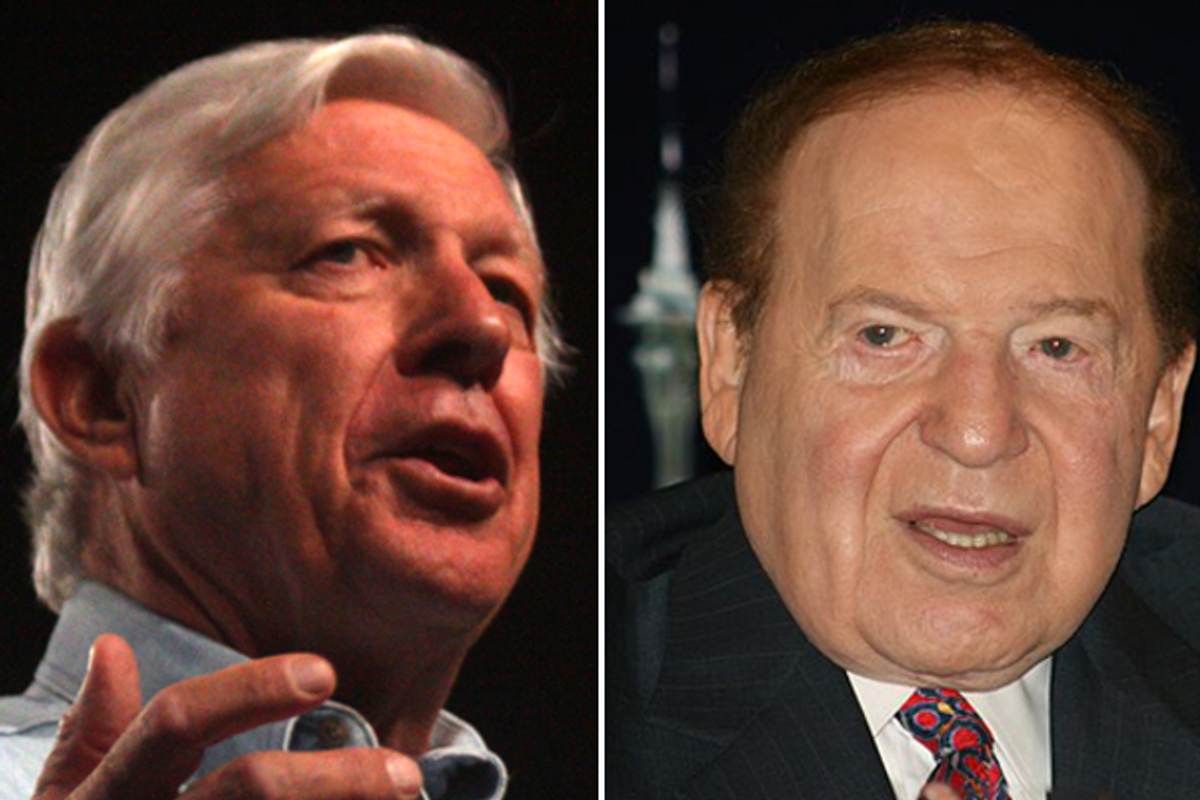 Have you heard of William Dore, Foster Friess, Sheldon Adelson, Harold Simmons, Peter Thiel or Bruce Kovner? If not, let me introduce them to you. They’re running for the Republican nomination for president.

I know, I know. You think Rick Santorum, Newt Gingrich, Ron Paul and Mitt Romney are running. They are – but only because the people listed in the first paragraph have given them huge sums of money to do so. In a sense, Santorum, Gingrich, Paul and Romney are the fronts. Dore et al. are the real investors.

According to January’s Federal Election Commission report, William Dore and Foster Friess supplied more than three-fourths of the $2.1 million raked in by Rick Santorum’s super PAC in January. Dore, president of the Dore Energy Corp. in Lake Charles, La., gave $1 million; Freiss, a fund manager based in Jackson Hole, Wyo., gave $669,000 (he had given the Santorum super PAC $331,000 last year, bringing Freiss’ total to $1 million).

Sheldon Adelson and his wife, Miriam, provided $10 million of the $11 million that went into Gingrich’s super PAC in January. Adelson is chairman of the Las Vegas Sands Corp. Texas billionaire Harold Simmons donated $500,000.

Bottom line: Whoever emerges as the GOP standard-bearer will be deeply indebted to a handful of people, each of whom will expect a good return on their investment.

And this is just the beginning. We haven’t even come to the general election.

Nonprofit political fronts like Crossroads GPS, founded by Republican political guru Karl Rove, are already gathering hundreds of millions of dollars from big corporations and a few wealthy individuals like billionaire oil and petrochemical moguls David and Charles Koch. The public will never know who or what corporation gave what because, under IRS regulations, such nonprofit “social welfare organizations” aren’t required to disclose the names of those who contributed to them.

Before 2010, federal campaign law and Federal Election Commission regulations limited to $5,000 per year the amount an individual could give to a PAC making independent expenditures in federal elections. This individual contribution limit was declared unconstitutional by the District of Columbia Court of Appeals in a case based on the Supreme Court’s grotesque decision at the start of 2010, Citizens United vs. Federal Election Commission.

Now, the limits are gone. And this comes precisely at a time when an almost unprecedented share of the nation’s income and wealth is accumulating at the top.

Never before in the history of our Republic have so few spent so much to influence the votes of so many.