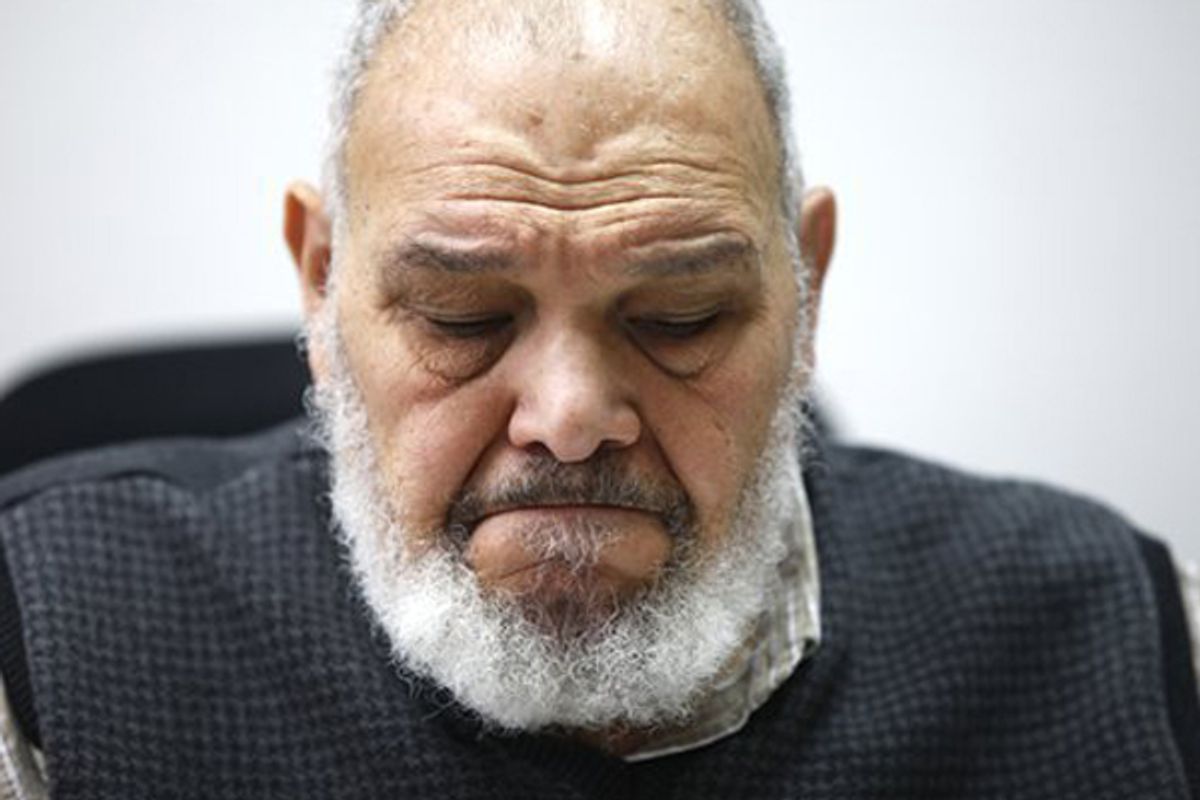 Mohammed el-Sioufi, an accountant and vice president of the Islamic Culture Center, a mosque in Newark, is interviewed by the Associated Press about the New York Police Department's surveillance of the Muslim community in Newark, N.J., Wednesday, Feb. 15, 2012. (AP/Charles Dharapak)
--

The hallmark of a Surveillance State is that police agencies secretly monitor and keep dossiers on not only those individuals suspected of lawbreaking, but on the society generally, including those individuals about whom there is no suspicion of wrongdoing. For the past year, the Associated Press has systematically exposed how the New York Police Department, often working in conjunction with the CIA, engaged in a sprawling spying campaign aimed at Muslim individuals, students, institutions and mosques in the United States, all without a whiff of any suspected wrongdoing. Yesterday, the four AP investigative reporters who have exposed this program won a well-deserved Polk Award for their "investigation that showed the NYPD had built one of the largest domestic intelligence agencies in the country." In particular, the "reporters documented how the NYPD assigned 'rakers' and 'mosque crawlers' to ethnic neighborhoods, infiltrating everything from booksellers and cafes to Muslim places of worship."

On Monday, AP detailed how the NYPD spied on numerous Muslim students and their campus organizations. In particular, "police trawled daily through student websites run by Muslim student groups at Yale, the University of Pennsylvania, Rutgers and 13 other colleges in the Northeast" and "talked with local authorities about professors in Buffalo and even sent an undercover agent on a whitewater rafting trip, where he recorded students' names and noted in police intelligence files how many times they prayed." The dossiers noted the names of Muslim student leaders and even stored emails sent and received by some of them. All this, even though the "documents mention no wrongdoing by any students."

Today, AP released a newly obtained report by the NYPD from 2007 about the Muslim community in Newark, New Jersey -- both Middle Eastern and African-American in origin -- prompting one of the AP reporters, Matt Apuzzo, to ask on Twitter: "If NYPD can write docs like this outside its jurisdiction, where cant they go? Post-9/11, is NYPD a nat'l police force?" As AP reported today about this newly released dossier: "Americans living and working in New Jersey’s largest city were subjected to surveillance as part of the New York Police Department’s effort to build databases of where Muslims work, shop and pray." The report was produced as part of a surveillance campaign whereby "plainclothes officers from the NYPD’s Demographics Units fanned out across Newark, taking pictures and eavesdropping on conversations inside businesses owned or frequented by Muslims." Yet again, "the report cited no evidence of terrorism or criminal behavior," but was meant to instead be "a guide to Newark’s Muslims." AP continued:

Such surveillance has become commonplace in New York City in the decade since the 2001 terrorist attacks. Police have built databases showing where Muslims live, where they buy groceries, even what Internet cafes they use and where they watch sports. Dozens of mosques and student groups have been infiltrated and police have built detailed profiles of ethnic communities, from Moroccans to Egyptians to Albanians. . . . The effect of the program was that hundreds of American citizens were cataloged — sometimes by name, sometimes simply by their businesses and their ethnicity — in secret police files that spanned hundreds of pages.

It is really worth looking at this document for a sense of how insidious it is when the government spies on and compiles files about innocent citizens. The report contains numerous maps identifying the locations of all mosques in Newark:

It contains photographs of those mosques and other Islamic groups and even schools, including ones in private homes, accompanied by identifying information and other notes suggesting some sort of nefarious intent ("aggressive counter-surveillance observed," which presumably means that someone from the mosque was watching police agents spy on them):

The report even includes maps and active surveillance of halal shops, Middle Eastern groceries, and restaurants where Muslims gather:

AP details that numerous names of individuals suspected of no wrongdoing are often included in these files; here, for instance, is what was contained the dossier compiled by the NYPD about the Muslim community on Long Island:

The effect of the program was that hundreds of American citizens were cataloged — sometimes by name, sometimes simply by their businesses and their ethnicity — in secret police files that spanned hundreds of pages:

— “A Black Muslim male named Mussa was working in the rear of store,” an NYPD detective wrote after a clandestine visit to a dollar store in Shirley, N.Y., on Long Island.

— “The manager of this restaurant is an Indian Muslim male named Vicky Amin” was the report back from an Indian restaurant in Lindenhurst, N.Y., also on Long Island.

— “Owned and operated by an African Muslim (possibly Sudanese) male named Abdullah Ddita” was the summary from another dollar store in Shirley, N.Y., just off the highway on the way to the Hamptons, the wealthy Long Island getaway.

New York Mayor Michael Bloomberg has long claimed -- preposterously -- that the NYPD does not target communities for survillence based on their religion, but as AP notes:  "In one section of the  report, police wrote that the largest immigrant groups in Newark were from Portugal and Brazil. But they did not photograph businesses or churches for those groups." That's because "'No Muslim component within these communities was identified,' police wrote." In the wake of this latest evidence, Bloomberg seemed to abandon that denial, shifting instead to justification: "The police department goes where there are allegations. And they look to see whether those allegations are true," said the Mayor. "That's what you’d expect them to do. That's what you'd want them to do. Remind yourself when you turn out the light tonight."

This government spying on the perfectly innocent activities of innocent Americans and other legal residents is just a tiny though illustrative fraction of the dossiers being regularly compiled by government agencies. The Surveillance State compiles a massive amount of data about even the most innocuous activities of Americans -- recall that the Washington Post's "Top Secret America" 2010 series reported that "every day, collection systems at the National Security Agency intercept and store 1.7 billion e-mails, phone calls and other types of communications" -- and the scope of what it gathers always expands and never constricts. But there are two odious aspects of the Surveillance State specifically highlighted by the NYPD's program here.

First, Muslims generally -- and, increasingly, American Muslims -- are branded with virtually official non-person status under the law. On Monday, I wrote about the way in which core tyrannical powers -- arbitrary detention, limitless spying, due-process-free assassinations -- have become normalized in the U.S., Israel and its Western allies, but it is almost always Muslims who are the target of these abuses. Every serious episode of civil liberties assaults in American history was driven by the full-scale demonization of one specific group. There are still plenty of groups who perform that function, but there is no question that Muslims are the prime target now.

Second, this perfectly illustrates what I have often described as the one-way mirror dynamic of the American Surveillance State: it isn't merely that the State knows more and more about the private activities of citizens, but worse, that happens at exactly the same time that citizens know less and less about the activities of the State. At exactly the same time that the Surveillance State has exploded into a sprawling, ubiquitous, unaccountable apparatus, the U.S. Government and its various agencies have erected an increasingly impenetrable wall of secrecy behind which it operates. This imbalance grows inexorably. Note how the NYPD report -- which collects all sorts of information about Newark Muslims suspected of no wrongdoing -- contains these designations and warnings on its cover:

That's the essential expression of the American Surveillance State: we can and will know everything about what you do, and you will know virtually nothing about what we do. In a healthy society, that formula would be reversed: the citizenry (with rare exceptions) would know most everything about what their government does, while the government would know nothing about what citizens do in the absence of well-grounded suspicion that they have done something wrong. Yet here we have the NYPD wandering outside of its jurisdiction in order to spy on the innocuous activities of a community of a religious minority (not even the Newark Mayor was informed about this), and the most disturbing part of it all is how common it now is.

Speaking of the one-way mirror of the Surveillance State, a Polk Award was also awarded yesterday to The New Yorker's Jane Mayer for her excellent article on the Obama administration's war on whistleblowers, which I wrote about here. As the Committee awarding the Polk Awards put it: Mayer "ends her masterful tale with the conclusion that America’s bloated 'national-surveillance state' poses a greater threat to civil liberties than ever before."