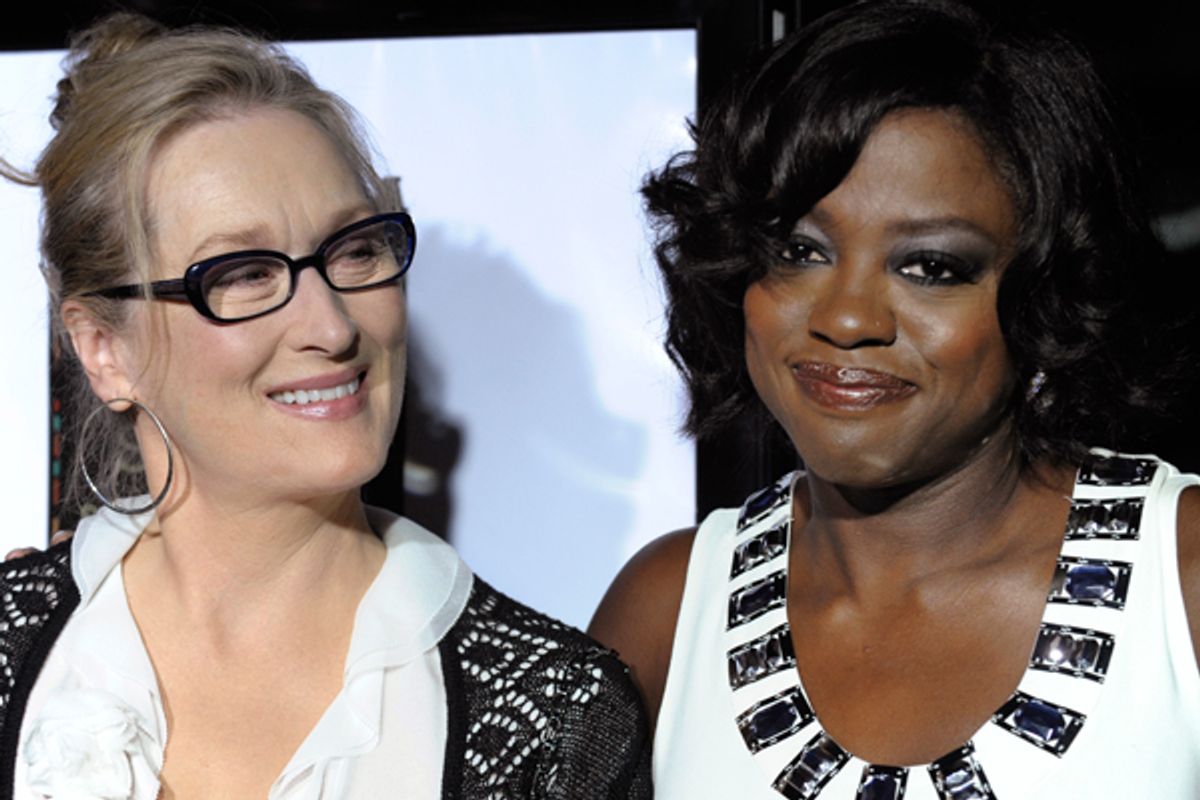 When I saw Viola Davis across the room, wearing a shimmering pink sheath dress, I wasn't quite sure what she was doing there. This was at the New York Film Critics Circle's awards dinner in January, a relatively intimate event that has a history of bringing out the stars. But it's not the Oscars or the SAG Awards or the Golden Globes; there are no TV cameras and no red carpet to work. More to the point, the awards are announced in advance, and Davis hadn't won anything. Maybe she'd have turned up anyway to support Jessica Chastain, her costar in "The Help," who was winning a supporting-actress award, but Davis was mostly on hand to introduce Meryl Streep, who had won the group's best actress award for her performance as Margaret Thatcher in "The Iron Lady."

In a striking kickoff to the two actresses' back-and-forth awards-season competition, Davis paid a warm tribute to the woman she described as an idol, a mentor and a friend. She spoke openly about the loneliness of being an ambitious African-American actress with very few role models to follow, who had seen talented forerunners like Cicely Tyson and Dorothy Dandridge essentially kicked to the curb by Hollywood. She hadn't been looking for a Caucasian role model, she said, but the craft and range of Streep's work on stage and screen had always impressed her, and when they worked together on the 2008 film "Doubt" (for which both were Oscar-nominated) they became good friends. Streep's example had demonstrated a fearlessness and generosity, Davis told us, that had opened new pathways in her personal and professional life.

Streep then took the stage to deliver a dry comic monologue in which she claimed -- incorrectly, I believe -- that only a minority of the critics in the room had voted for her. (I'm a member of the group, and I don't understand its voting procedures, but Critics Circle chair John Anderson has said that Streep won a first-ballot majority.) But before she moved on to that, Streep thanked Davis for her introduction: "How remarkable, and how generous, for you to do that. This is your year."

That was a heck of a lot of high-class dames in less than five minutes, and we were all appropriately dazzled. But looking back on that event, and Davis' remarkable speech, I think that Meryl Streep saw what was coming more clearly than the rest of us did. (Furthermore, I think she's 100 percent fine with it.) At that moment, she looked like the prohibitive favorite to win the best actress Oscar, both because she had given a dominating performance as a major historical figure in a big holiday-season movie, and also because she has been nominated an unbelievable 13 times since her last win (for "Sophie's Choice," in 1983) and at age 62 is probably close to the end of her leading-lady career. She went on from the New York critics' award to win several other prominent critics' groups, along with the BAFTA Award and the Golden Globe. A shoo-in, right?

Not exactly. Of course I could be proven wrong, but along with virtually everybody else who pays attention to this circus, I'm betting that Viola Davis ends up clutching one of those little gold statues on Sunday night -- as much because everybody watching wants to hear her acceptance speech as because of anything she did on-screen in "The Help." People talk about all the backstage hoodoo that goes into an Oscar campaign, and Harvey Weinstein's admittedly amazing powers to bend the minds of Academy voters to his will. But I'm not sure we've ever seen an actor go out and claim an Oscar during the campaign in quite the forthright and dramatic way that Davis has.

Davis evidently decided that this was her opportunity, after a long career of stage roles and oddball supporting parts and runs on "United States of Tara" and "Law & Order: SVU," to come out with guns blazing and let the world know who she was and what she thought. It may have been a calculated decision on some level, but she's a ferocious, intelligent and independent-minded woman as well as an outstanding actor, and there's nothing strategic about that. She has spoken directly about all the racial and social discomfort caused by "The Help," and about the yearning for positive role models that sometimes limits the choices of African-American artists.

Most notably, when PBS talk-show host Tavis Smiley told Davis and costar Octavia Spencer (who is also likely to win, for best supporting actress) that he felt ambivalent about the prospect of them winning Academy Awards for playing servants, six decades after Hattie McDaniel, Davis delivered a dressing-down that violated the happy-friendly norms of chat TV. “That very mind-set that you have and that a lot of African-Americans have is absolutely destroying the black artist," she told Smiley. "The black artist cannot live in a place -- in a revisionist place. A black artist can only tell the truth about humanity, and humanity is messy, people are messy.” Smiley was clearly startled -- but he was standing on the track in front of the Viola Davis Oscar Express. One can only pity the fool.

Davis has talked openly, but without a hint of self-pity, about the difficulties of being a black actress in an industry that still relies heavily on caricature and stereotype, and even about being a dark-skinned black actress at a time when, as she recently put it, "Halle Berry is having a hard time." After she brought this up, during a Newsweek panel discussion featuring various Oscar candidates, Charlize Theron jumped in to assure Davis she was "hot as shit," which was a nice thing to say and all but (as many commentators have observed) massively misses the point. Win or lose at this year's Oscars, Davis won't get offered Theron's wide-ranging dramatic roles, from serial killer to narcissistic sexpot, and won't get the Vogue covers or Dior endorsement deals either. If it's any consolation -- and it probably is -- Theron's "Young Adult" was a dud, and she was not nominated this year.

As far-fetched as this seems now, when Davis delivered that Manhattan introduction for Streep, she was a long way from being a for-sure nominee herself. She had appeared in a pulpy, controversial hit that had opened well before Oscar season and was aimed 100 percent at female audiences (two doses of poison for the guy-centric Academy), a movie that made a lot of money and ignited a sharply polarized debate on the history of race in America. That's at least three strikes, maybe four -- and then there was the question of whether Aibileen Clark, Davis' character in "The Help," even qualified as a leading role. Emma Stone's crusading white journalist, Skeeter Phelan, is clearly the protagonist, and Aibileen is pretty much the stoical, even-tempered Robin to Skeeter's hotheaded Batman. On the other hand, while Stone and Spencer and Jessica Chastain and Bryce Dallas Howard and all the other women in the movie chew up the scenery (and often enjoyably so), Davis delivers a performance of tremendous dignity and quiet, almost stillness. Amid all the histrionics and violence and poop-eating, Aibileen is like a Zen monk contemplating the essential emptiness of everything. She knows a great deal more than she says, and Davis communicates that nonverbally, through her carriage, her measured movements, the long pauses before she speaks.

Everything the Academy ever does can, and probably should, be viewed through a cynical lens. Nominating Davis for best actress -- along with the supporting nods for Chastain and Spencer -- was a way of honoring "The Help" as one of the year's cultural touchstones while navigating around the racial controversy sparked by the film's release. The Oscar-season script, a few weeks ago, looked something like this: African-American viewers got a rooting interest in the best actress campaign (while still being permitted, like Tavis Smiley, to deplore "The Help" on various levels), Davis got a major notch in her career belt, and Streep would go on to collect a career-spanning Oscar after a tour de force performance and many years as a bridesmaid.

Instead, Viola Davis has seized the opportunity. Not just the opportunity to stage an unlikely upset and win an Oscar, although she's probably done that. More important, she has seized the chance to remind us that she is an immensely underutilized and underappreciated actress and one of the most outspoken free thinkers in the closed-mouthed, cliché-spouting world of Hollywood stardom. Should she be playing bigger and better parts than Aibileen Clark? Of course. Was that really the best screen acting performance of the year? Almost certainly not. But the Oscar is always about much more than that, like it or not, and someone with Meryl Streep's social conscience and sense of drama understands that well. We'll likely never know what Streep may have told her friend in private, but what she said in public was enough: "This is your year." She was right.