The GOP’s other nomination headache

Suddenly, it’s not just the top of their ticket that Republicans have to worry about 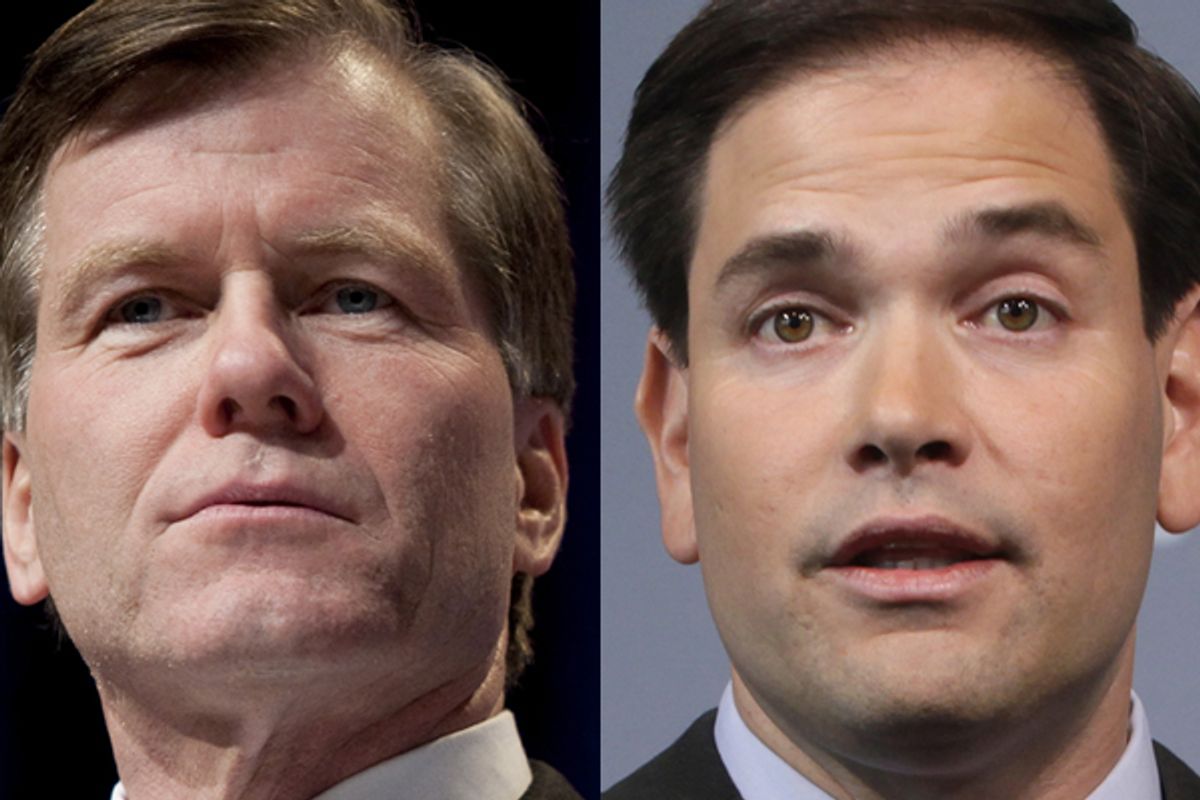 So far, this primary season has produced plenty of reasons for Republicans to worry about their November prospects.

Mitt Romney, supposedly their most electable option, has struggled mightily to win over the party base and has been forced dangerously far to the right in the process. He’s also met alarming resistance from blue collar and middle class Republican voters, and there’s evidence that – at least for now – his problems with those income groups extend to the general election audience. Of course, it’s not like the three Romney alternatives left standing are better fall bets. Rick Santorum seems incapable of opening his mouth without inflaming the culture wars, Newt Gingrich is Newt Gingrich, and Ron Paul … well, he’s just not going to be the nominee.

So Romney remains the favorite to prevail, but the process, which has already gone on longer and been uglier than expected, may still drag on for a while, further damaging his general election positioning.  Plus, the economic news of the past few months has been encouraging, a trend that – if it continues – will make Barack Obama a strong favorite for reelection, no matter whom the Republicans nominate.

This week, though, has provided a new twist: It’s not just the top of the ticket that could cause Republicans headaches this year. The headlines of the past few days have raised or reinforced questions about the viability of two of the top prospects for the No. 2 slot.

Start with Virginia Governor Bob McDonnell. On paper, the 57-year-old makes plenty of sense. His state, which sided with Barack Obama in 2008 after voting Republican in ten straight presidential elections, is pivotal to his party’s White House hopes, and Romney – whom McDonnell has endorsed – even singled him out as a potential VP last year. McDonnell himself is plainly interested, and even made the case for his selection on Fox News Sunday earlier this month.

“People are saying it's a swing state," he said. "We balance the budget without raising taxes, $1 billion in surplus, lowest unemployment in the Southeast. You know, we're really pleased with things we've been able to do in Virginia."

But for the foreseeable future, McDonnell will be known for only one thing: the mandatory vaginal ultrasound bill that he championed. After a loud national outcry, he finally backed off this week, embracing a compromise that would force women seeking an abortion to instead undergo a non-invasive abdominal ultrasound. But the effect of the controversy has been to stamp McDonnell, a graduate of Pat Robertson’s law school (where he wrote a thesis outlining a far-right public policy vision on cultural issues), as the face of the GOP’s push to fight the abortion wars through women’s healthcare issues.

The promise of McDonnell as a VP prospect was that his roots in Christian conservatism would make him attractive to the party base, but that he’d be able to present himself to general election voters as a leader with a broader, economic-based agenda. This was how he ran for governor in 2009, playing down cultural issues and presenting himself as a jobs creation specialist. But because of the ultrasound bill, there’s no way now that he could do the same thing on the national stage. If McDonnell were the VP nominee, the questions about ultrasound and his entire cultural agenda would begin immediately and wouldn’t stop until the end of the race.

It’s hard to believe Romney, if he is the nominee, would want to go down this road. Sure, he’s been forced to the right himself on cultural issues (like contraception), but that’s probably out of political necessity. Given the damage that the contraception debate is already doing to the GOP brand, would he really want to go out of his way to make vaginal ultrasounds a general election issue?

And then there’s Marco Rubio, who many have seen as the runaway favorite for the No. 2 slot. He’s a charismatic speaker with potential appeal to Hispanic voters, a crucial fall constituency, and he represents a giant swing state that Obama barely carried four years ago, Florida. He also is something of a rock star on the Tea Party right.

But now comes news that he was actually baptized as a Mormon and was an enthusiastic member of the church in his formative years. It may sound ridiculous to consider the political implications of someone’s church membership at age 12, but for a significant chunk of the Republican Party base, Mormonism isn’t just any other religion. Romney’s sustained struggles in the South, where LDS suspicion is particularly pronounced among Pentecostals and Southern Baptists, testify to this. Would a general election ticket with one full-fledged Mormon and one baptized Mormon who later converted to Catholicism be too much for these voters?

The Rubio news also speaks to a broader issue: He’s only been on the national stage for a about two years and we’re still learning about him. A few months ago, his account of his family’s immigration story was called into question. And issues surrounding his personal finances and his use of a Florida state GOP credit card haunted his 2010 campaign. He was apparently planning to reveal his Mormon past in a forthcoming book, but the fact that it wasn’t known until now raises the question of whether there are any other politically significant surprises in his past.

McDonnell and Rubio aren’t the only VP options for Republicans, but they’ve long seemed like two of the most attractive. It’s another headache for a party that already has a few to deal with.