The NYPD spying controversy: a microcosm for the 9/11 era 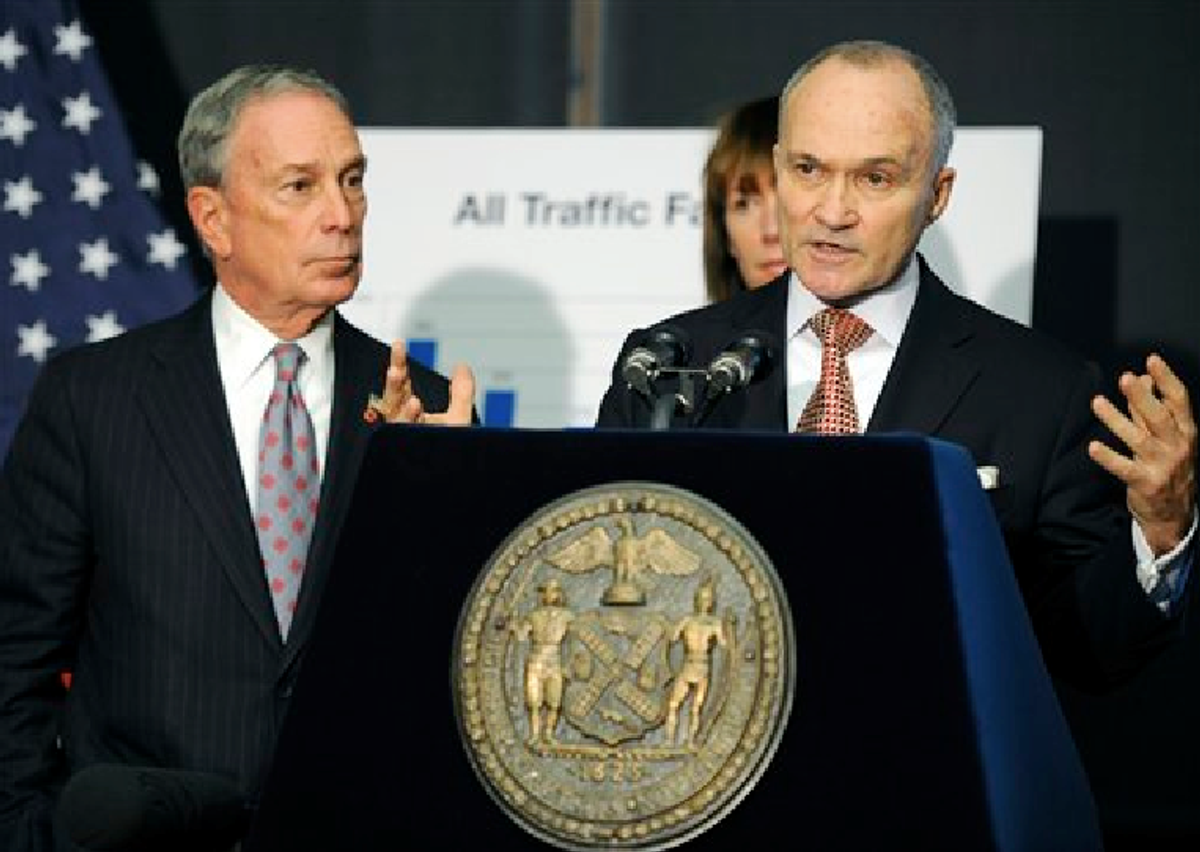 The NYPD spying program exposed by Associated Press may be the most flagrant instance in the War on Terror where "being Muslim" is overtly equated by a government agency to being a Terror threat. It is beyond question that huge numbers of completely innocent, law-abiding people -- and the institutions to which they belong and even the businesses they patronize -- were extensively surveilled and infiltrated for no reason whatsoever other than their religious and/or ethnic identity. That includes a small Newark school for African-American Muslim children in the first to fourth grades as well as every Halal restaurant that could be located. And in the ensuing fallout we find a perfect microcosm for how War on Terror civil liberties abuses have not only endured, but continue to thrive domestically, more than a full decade after the last successful Terrorist attack on U.S. soil.

The NYPD surveillance scheme took place in secret, with no oversight or legal framework. It was accomplished in part through the use -- and abuse -- of the post-9/11 police state and Drug War funding bonanza from the White House, which gave the NYPD the funds (ostensibly to fight the drug trade) that were then used to pay for the surveillance trucks used to track Muslim communities. Once revealed, city officials like Mayor Michael Bloomberg and NYPD Chief Ray Kelly immediately hauled out the all-purpose justifying, fear-mongering term -- Terrorism -- to insist that the indiscriminate spying program was both necessary and proper to Keep Us Safe. Right-wing, neocon, Murdoch-owned media outlets churn out vehemently anti-Muslim agitprop to justify the program. Only a small handful of groups -- in this case the ACLU and CAIR -- object to the surveillance abuses, as both groups called yesterday for an official investigation into the NYPD as well as the role the U.S. Government played in enabling the spying; one Bloomberg appointee, a Muslim lawyer, said the spying was "obviously illegal." But, as usual, those handful of dissenters are drowned out by the long line of political figures from both parties -- including Democrats in super safe seats -- which eagerly forms in order, out of a mix of cowardice and conviction, to defend the civil liberties assaults:

Sen. Chuck Schumer stands up for the NYPD’s fight against terrorism

Finally, after weeks of innuendo, half-truths and distortions that have depicted the NYPD as spying on the city’s Muslim communities, an elected official has spoken the truth.

There’s no there there, said Sen, Chuck Schumer of reports that the department’s Intelligence Division invasively monitored New Yorkers based on their religious beliefs. . . .

Referring to Police Commissioner Ray Kelly, Schumer said: “I don’t think he has a bigoted bone in his body.”

He added: “There is nothing wrong with the NYPD collecting and assessing publicly available information from New York, New Jersey, the other 48 states or around the world in the effort to prevent another terror attack like 9/11. In fact, it is widely understood that the NYPD’s actions have kept us safer. . . ."

Schumer's statement is just false -- much of the information was not at all "public" but was compiled through infiltration and spying -- and one would like to see how he'd react if the NYPD were compiling dossiers on entire Jewish communities or law-abiding Christian groups. And then there's this, from the only politician in America who appears competitive with Mitt Romney in terms of being so desperate for power that they're willing to contort themselves into anything that the moment requires:

In a statement on the topic, Quinn suggested that she would continue the strategy if voters elect her to succeed Mayor Michael Bloomberg next year. “Unless we know that laws were broken or someone’s civil liberties were violated, I do not think the NYPD should stop the practice,” she said — an indication that she doesn’t believe police have breached anyone’s rights in its surveillance program based on the information that has been made public so far. . . .

Quinn, who started out her career as a housing- and gay-rights activist deeply entrenched in the rabble-rousing, liberal wing of city politics, has moved to the center over the years. She’s formed a tight alliance with Bloomberg, who is widely seen as a potential supporter of her yet-to-be announced mayoral candidacy.

Similarly, New York Attorney General Eric Schneiderman said he sees no reason to investigate the spying program, and was supported in that decision by New York Governor Andrew Cuomo. Notably, as New York Democrats line up to praise the anti-Muslim surveillance, Newark's Democratic Mayor Cory Booker, as well as GOP New Jersey Governor Chris Christie -- have both denounced the spying program insofar as it was aimed at their city and state.

So that is basically the story of the general civil liberties assault and the accompanying demonization of Muslims in America since 9/11. The Government spies on whomever it wants in total secrecy and with no checks or oversight. In those rare instances where it is revealed, those responsible immediately screech Terrorists! to keep fear levels high, while politicians in both parties, with rare exception, line up to support these assaults. The bigoted equation of Muslims with Terrorism is incrementally bolstered each time. And all of this becomes more and more normalized -- not an aberration but the norm in American political life.

Along with Faiza Patel of the Brennan Center for Justice, I was on Al Jazeera's The Stream program yesterday to discuss the NYPD spying program; that segment can be seen here:

UPDATE: Here are 3 questions I submitted this morning to Speaker Christine Quinn regarding her support for the NYPD spying program and her vow to continue it if she becomes Mayor. Meanwhile, here is one comment from one of the Congress' best members, Rep. Rush Holt of New Jersey:

That link goes to an AP article reporting on a letter sent by Holt to Attorney General Eric Holder in which he writes: "I believe that these serious and significant allegations warrant an immediate investigation."