One of the few things about illness people can control is whom to tell. That\'s why so many choose to keep it secret 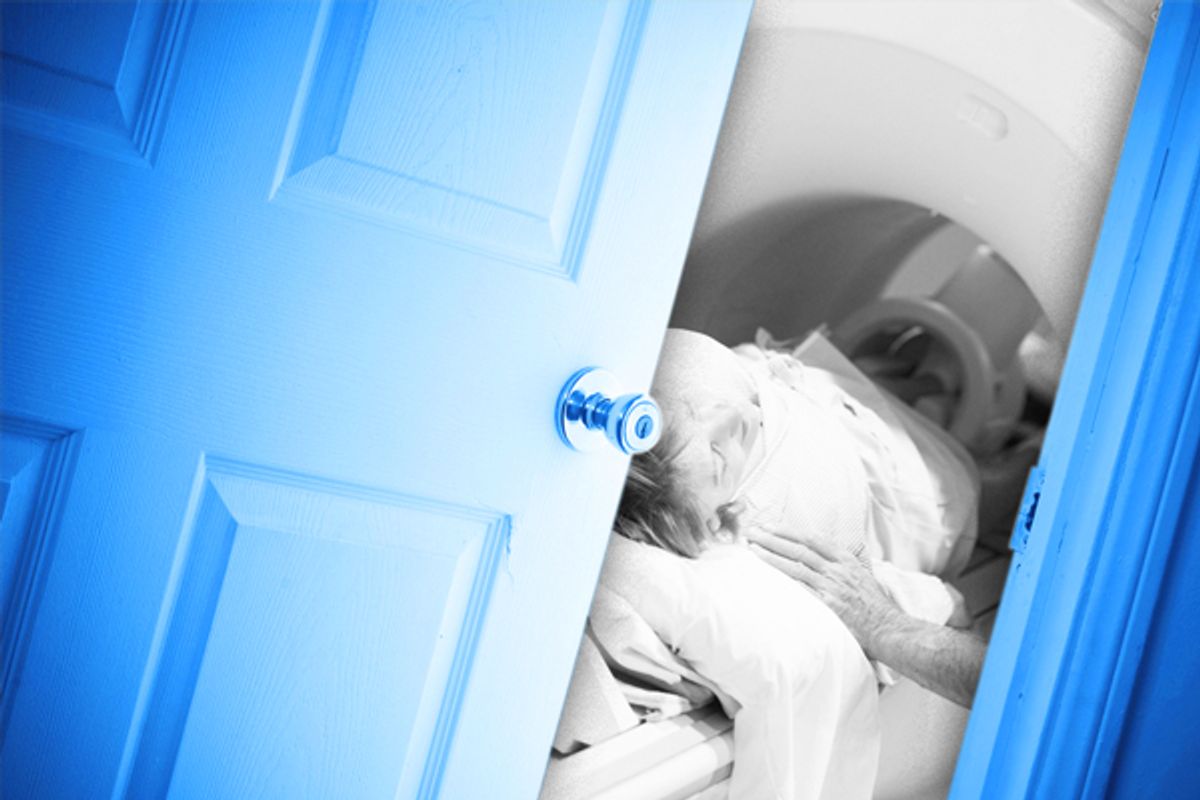 "My clients don't know," he told me. How could they? My neighbor Edward (some names and some identifying details have been changed) doesn't look sick. In many ways, he isn't. He's a dapper, graying-at-the-temples man with two young children, a consulting business -- and a recurring cancer for which he's currently facing another round of treatments. It's hard enough drumming up business in this economy, Edward says. If a potential client's choice comes down to the healthy 30-year-old and the middle-aged man with a tumor, well, who would you choose? So he presses on in secret, cleverly arranging his business schedule around doctor visits and scans. He's in the cancer closet.

One of the first things you have to deal with when faced with a life-altering illness is the decision about whom you're going to tell, and how. When I learned I had malignant melanoma a year and a half ago, I told my editor before I told my family. (OK, I was on a deadline at the time.) Two days later, I told the whole world in a cover story for Salon. Two months ago, Boing Boing writer Xeni Jardin live tweeted her first mammogram – and her stunning diagnosis of breast cancer – to thousands of followers. For some of us, the diagnosis is where we find our voice. For others that kind of candor isn't an option, for either professional or personal reasons.

While a friend was going through breast cancer treatment a few years ago, few in our circle knew that her mother was facing it at the same time. Five years later, Ginger, a figure skating coach, says that "I knew if I told anyone, my students would immediately start looking for another coach." Instead, she covered up surgery with a story of a vacation to Maine, and sandwiched months of afternoon chemo and radiation treatments in between early morning and evening coaching sessions – and weekends traveling with her team. "It took everything to get through it," she says now. "There were times I was so exhausted I couldn't see straight. A couple of times I had to leave the ice because I was so sick." But she says she's never regretted her choice to keep silent. On the contrary, sticking to her rigorous work schedule and maintaining the demeanor of health was "what got me through."

In the midst of a health crisis, the routines of a career -- the sense of purpose and obligation it provides -- can provide motivation and escape, something that isn't easy to pull off when everybody's concerned about your condition. Chris, a doctoral student and teacher at an academic medical center, didn't enjoy having his students popping in to check on him during his treatment after a lung transplant for his cystic fibrosis. He's since switched his care to a different facility. Now that he's no longer on oxygen – "when you can't conceal a blessed thing" -- he's also discreet with his peers. "I don’t want people deciding for me what I'm able to do," he says. "I'm pretty good at determining that for myself." He knows first- and secondhand how damaging honesty can be. When his wife asked for a scheduling change around one of his procedures, her boss relieved her of her duties, telling her that "he'd decided she wouldn't be able to handle her responsibilities." Pretty bold of him to come out and say it. The ease with which employers can "restructure" or blame a termination on popular culprits "inconsistency" or "absenteeism" make it easy to conceal how often people with chronic conditions and their caretakers lose their jobs over them -- and even harder to determine how great a role illness plays in hiring practices.

Thanks to our often punitive American healthcare system, the consequences of illness can be severe far beyond the illness itself. Linda, who was diagnosed with MS four years ago, says her friends know her condition but she rigorously keeps it from her co-workers. "It's bad enough to live with this disease not knowing how it will affect me," she says, "but I am terrified that it could also affect my employment prospects." For Linda, like far too many of us in this country, "the thought of losing my job and thus my healthcare is probably my biggest nightmare." The Patient Protection and Affordable Care Act doesn't take full effect for another two years, when no one will be able to be denied coverage based on preexisting conditions. Currently, you can  apply for a "high risk pool" if you've been uninsured for six months.  That's a lifetime for a person with a serious illness, and for those of us on ongoing treatments and drugs, an unfathomable expense.

There are other reasons beyond the fear of career repercussions for keeping illness a secret. Nobody wants to be viewed as an invalid, or the one who might be circling the drain. And as cancer blogger Katherine, who has metastatic breast cancer, says, "It's often easier not to challenge people's assumptions than to explain." Linda agrees that "I am perfectly capable of working and living a mostly normal life. However, there is still an antiquated view of MS in our society, and many people automatically assume that once you are diagnosed, your next step is a wheelchair." And Ginger notes that even in this day and age, when you can't swing a cat without hitting a LIVESTRONG bracelet, "There's such a death sentence that people put on cancer." The reality of illness is that there are plenty of days when you're going through the rigors of treatment and its side effects, that you just don't want to be the official spokesperson and explainer for This Is What My Disease Looks Like.

Just as difficult as being pitied, though, is the risk of finding yourself scorned for a condition beyond your control. Bette, who has autoimmune disorders, says, "I'm very Type A, never miss a day of work or class or a deadline, even if that means having to go throw up in the bathroom in between meetings with clients. There's a perception that people with autoimmune issues are weak, fragile, or delicate, which are characteristics I really try to avoid, especially as a woman. There's also a ton of stigma about fibromyalgia. Someone in my office the other day actually made a comment about how so many women say they have fibro for sympathy, which strengthened my resolve to keep my conditions to myself. " And Cheryl, who was diagnosed with Type 1 diabetes after an initial misdiagnosis of Type 2, says, "Many people think I ate my way to diabetes, since I'm overweight, but that's really not the case. I feel like my food choices are always silently (and sometimes not silently) judged. Look at the backlash that Paula Deen suffered. My reaction to that controversy? How awful that another person has to have this disease, no matter how she got it. It also feels somewhat embarrassing to be 'sick' -- like a personal failure that one of my organs doesn't work properly." Now, however, she says, "I decided to become more public about it," because among other things, "I'd rather do a shot in the middle of a crowded restaurant than in some dirty bathroom stall."

As Katherine advises, "Every individual will have their own reaction and coping mechanism" for dealing with long-term conditions and sudden, sharp reversals of fortune. We all grapple with the physical changes and scheduling nightmares, with balancing our privacy and our secrecy, with the desire to share and the longing to be seen as our healthiest, strongest selves. We know that when we say we have cancer or we have diabetes, we have cystic fibrosis or lupus we're HIV-positive, that you will not look at us or treat us the same way ever again. We just don't know whether we'll be met with compassion or a pink slip, with support or with judgment. There's so much about illness we can't control. That's why we care so much about the one thing we always still have power over:  the way we get to talk to you about it.