War on Terror logic and the Saudis 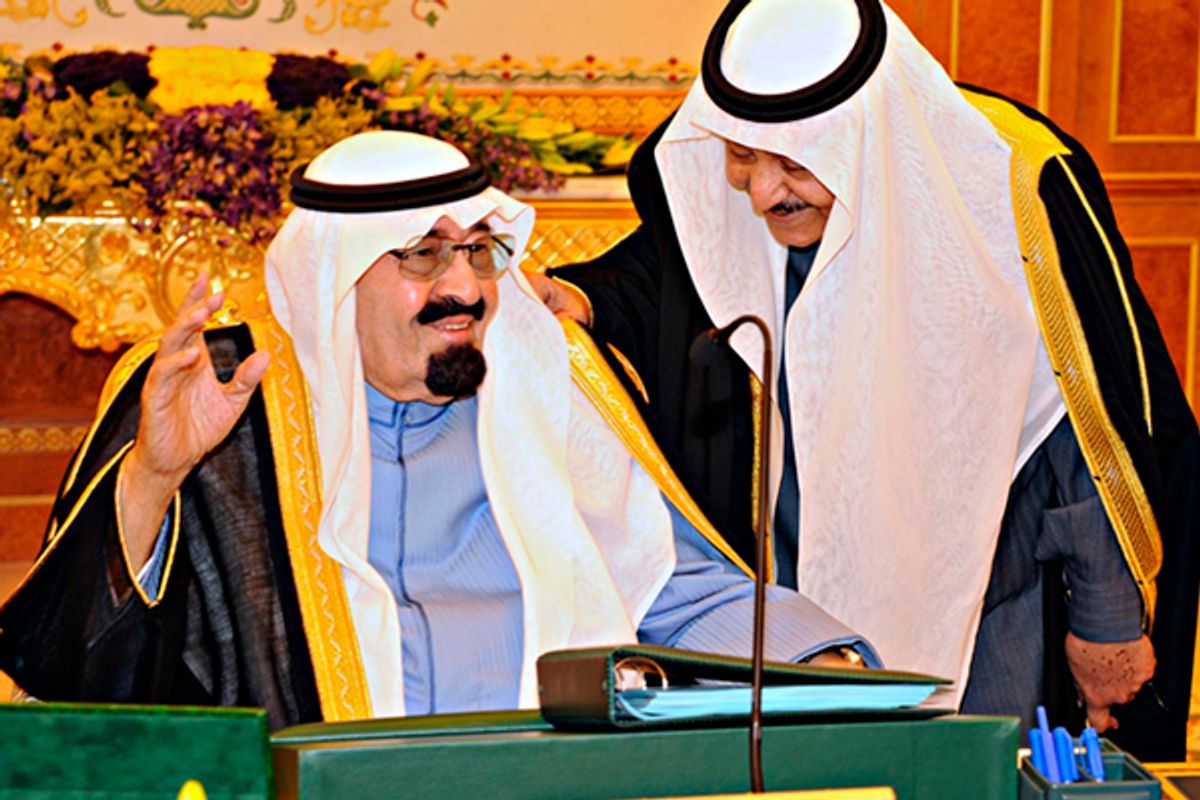 I'm unable to write much today, but I did want briefly to note one of the towering, central contradictions in War on Terror logic: namely, that the only foreign government which likely had any connection to 9/11 is the one which is the least likely to be attacked by the U.S. From The New York Times today:

For more than a decade, questions have lingered about the possible role of the Saudi government in the attacks on Sept. 11, 2001, even as the royal kingdom has made itself a crucial counterterrorism partner in the eyes of American diplomats.

Now, in sworn statements that seem likely to reignite the debate, two former senators who were privy to top secret information on the Saudis’ activities say they believe that the Saudi government might have played a direct role in the terrorist attacks.

“I am convinced that there was a direct line between at least some of the terrorists who carried out the September 11th attacks and the government of Saudi Arabia,” former Senator Bob Graham, Democrat of Florida, said in an affidavit filed as part of a lawsuit brought against the Saudi government and dozens of institutions in the country by families of Sept. 11 victims and others. Mr. Graham led a joint 2002 Congressional inquiry into the attacks.

His former Senate colleague, Bob Kerrey of Nebraska, a Democrat who served on the separate 9/11 Commission, said in a sworn affidavit of his own in the case that “significant questions remain unanswered” about the role of Saudi institutions. “Evidence relating to the plausible involvement of possible Saudi government agents in the September 11th attacks has never been fully pursued,” Mr. Kerrey said.

President Obama spoke to King Abdullah of Saudi Arabia today about the successful disruption of the Iranian-directed conspiracy to assassinate the Saudi Arabian Ambassador in Washington, DC. . . . [T]he President and the King reaffirmed the strong partnership between the United States and Saudi Arabia.

Fortifying one of its key allies in the Persian Gulf, the Obama administration announced a weapons deal with Saudi Arabia on Thursday, saying it had agreed to sell F-15 fighter jets valued at nearly $30 billion to the Royal Saudi Air Force.

Meanwhile, the U.S. in just the last three years alone -- in the name of 9/11 and Terrorism -- has dropped bombs on at least six Muslim countries whose governments had no connection whatsoever to 9/11 (often aimed at groups that did not even exist at the time of that attack). And now Washington is abuzz with exciting debates about the mechanics of how yet another country that had nothing whatsoever to do with 9/11 -- Iran -- should be aggressively attacked. As Jonathan Schwarz put it when the U.S. and the Saudis collaborated to depict the "Quds Forces plot" on U.S. soil as the latest proof of Persian aggression: "The funny thing is I’d bet the Saudi ambassador to the U.S. has closer ‘ties’ to Al Qaeda than 90% of the people we’ve killed with drones." In sum, 9/11 has absolutely nothing to do with virtually all of the policies the U.S. has since undertaken in the name of Terrorism: except that it is exploited to justify them all.

One other point: the next time someone tells you that the U.S. should intervene in this or that country out of its deep and abiding concern for human rights, think about how that is reconciled with what the White House calls "the strong partnership between the United States and Saudi Arabia."

UPDATE: Speaking of the complete lack of connection between U.S. policy justified by Terrorism and actual Terrorism: after the White House this week insisted the U.S. must remain in Afghanistan in order to get Al Qaeda, Jake Tapper of ABC News inquired as to when it was that an Al Qaeda fighter was last killed in that country. White House spokesman Jay Carney did not know the answer, but The Nation looked into it and found out.