After "The Artist," what's next for French film? 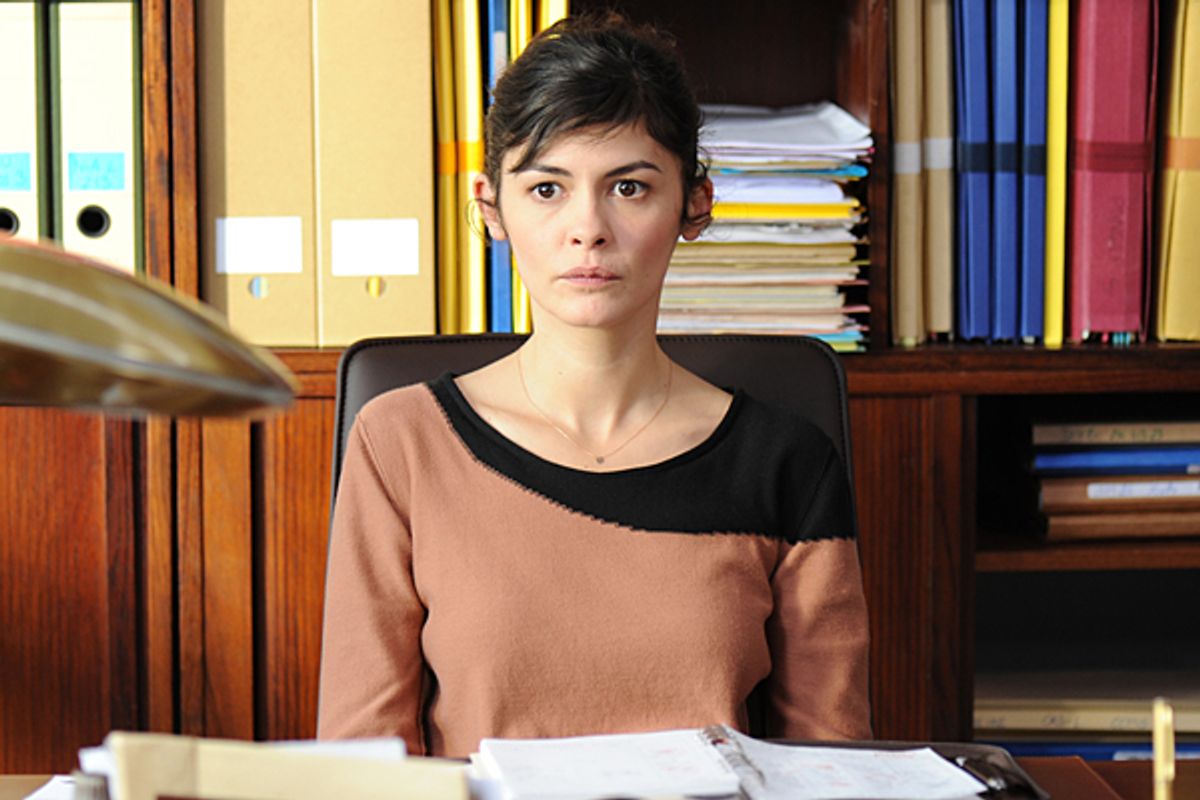 Are French films the new black in Hollywood? In the wake of the thoroughly implausible pile of Oscars won by "The Artist," is there another oddity of Gallic cinema out there ready to capture America's heart?

The obvious, and probably correct, answer might be: Tu plaisantes, non? (You're totally kidding, right?) On the other hand, long experience has taught all of us in and around the movie business never to bet against Harvey Weinstein on anything. He's already put some of his 2012 marbles on "The Intouchables," a cheerful Parisian comedy that pushes numerous contemporary buttons at once -- class, race, immigration, disability -- and that just opened the Rendez-Vous With French Cinema festival at New York's Lincoln Center. (It's currently scheduled for general release beginning May 25.)

Rendez-Vous always offers an annual opportunity to catch up on what's new in the Western world's other big moviemaking nation, long viewed by film buffs as the principal antagonist and counterpoint to Hollywood. Given the context, interest is especially high this year. (In 2010, the festival offered New Yorkers the spy spoof "OSS 117: Lost in Rio," from the then-unknown trio of director Michel Hazanavicius, actor Jean Dujardin and actress Bérénice Bejo.)

One can certainly decide to view "The Artist" as a kind of fluke -- and I will always maintain that its Oscar success was a fluke -- but it does reflect the tremendous flexibility and renewed confidence of the 21st-century French film industry, which churns out likable, commercial work like "The Intouchables" alongside more idiosyncratic, auteurist fare. If it's tempting to describe writing-directing duo Olivier Nakache and Eric Toledano's "Intouchables," which has become the second-highest-grossing French film of all time, as a feel-good industrial product that resembles various audience-friendly films of the past (from "Driving Miss Daisy" to "My Left Foot"), it's also not entirely fair.

Nobody's going to confuse this tale of a wealthy quadriplegic (François Cluzet, of the hit thriller "Tell No One") and his initially reluctant caretaker (Omar Sy), a Senegalese immigrant from the outer suburbs, with the work of Godard or Truffaut. But it has just enough realism and individuality to seem genuinely French, along with glowing performances from the two leads (especially Sy, who is exceptionally handsome and a natural comedian). It also wasn't created by an immense committee of writers, as the inevitable Hollywood remake -- George Clooney and Mekhi Phifer, maybe? -- will certainly be. In the current French political climate, where issues of immigration, skin color and national identity are hotly debated, "The Intouchables" has a cultural resonance it can't possibly have here. (Right-wing nationalist Jean-Marie Le Pen has interpreted it as an allegory about the nation's economic dependence on third-world immigration; who knew he was so smart?) But Weinstein could definitely wangle a crossover hit out of it, if anybody can.

One of the most anticipated films in the 2012 Rendez-Vous lineup isn't new at all. Indeed, Marcel Carné's 1945 epic "Children of Paradise," a legendary costume drama set on the 19th-century boulevards of Paris, may be the best-loved and most famous of all French films, and certainly of all those made before the New Wave began in the late '50s. Featuring prewar superstar Arletty as the mysterious Garance, ur-femme fatale of French cinema, and Jean-Louis Barrault and Pierre Brasseur as her dueling lovers, this classic romance has long been available only in badly damaged or incomplete versions. A thorough restoration premiered at Cannes last spring and now reaches America, with a theatrical rollout and home-video release to follow. (I'll have more on the restored "Children of Paradise" next week.)

Gamine French star Audrey Tautou has never again connected with English-language viewers the way she did in the 2001 international hit "Amélie," but Rendez-Vous' closing-night feature, "Delicacy," has some potential to bring her back. This modest, sweet-tempered love story from brothers David and Stéphane Foenkinos features Tautou as a hardworking Parisian widow who finds new romantic possibilities in the unlikely form of an awkward subordinate (French comedy star François Damiens). It opens March 14 in New York, with a modest national rollout to follow.

I haven't yet seen director Benoît Jacquot's alluring-looking "Farewell, My Queen," with Diane Kruger as Marie Antoinette and Léa Seydoux and Virginie Ledoyen among her ladies in waiting, but it's been strongly reviewed and has all the earmarks of a potential art-house hit (and, if you want to be mean, could serve as a welcome antidote to Sofia Coppola's much-derided "Marie Antoinette"). After opening this year's Berlin festival, it now has its United States premiere at Rendez-Vous and will reach American theaters this summer.

On the subject of royalty, actor-writer-director Mathieu Demy's "Americano" positively overflows with cinematic pedigree (and also compelling, wistful atmosphere). Demy is the son of New Wave filmmaking legends Jacques Demy and Agnès Varda, and his costar, Chiara Mastroianni, is the daughter of Catherine Deneuve and Italian superstar Marcello Mastroianni. When Demy's Franco-American character must return to his childhood home in Los Angeles after his mother's death, he's greeted by a family friend played by Geraldine Chaplin, who herself had a pretty famous dad. This is a wry, relatively low-key film about family secrets and trans-Atlantic identity, but one that's well worth seeking out and probably has modest box-office potential. (It's scheduled for U.S. release in late spring.)

The French penchant for artistic and literary gamesmanship -- which predates the so-called postmodern era by several hundred years -- shows up in several strange and delightful films that probably won't reach anyone but hardcore film buffs and Francophiles. Actor-turned director Mathieu Amalric's "The Screen Illusion" is an inventive modern-day staging of Pierre Corneille's proto-avant-garde 17th-century comedy "L'Illusion Comique," written in strict metrical verse dialogue. I found it off-putting for the first 20 minutes -- and irresistibly addictive after that. Similarly, Alain Cavalier's "Pater" is tough to describe, part improvised political drama starring Cavalier as a fictional French president and craggy French star Vincent Lindon as his prime minister, and part behind-the-scenes documentary about filmmaking. Once again, after I got used to Cavalier's zero-tech approach and the disconcerting blend of fiction and reality, I couldn't stop watching.

During the nonfiction segments of "Pater," Lindon starts talking about another movie he's in, playing a dermatologist who's treating a boy with XP, a rare genetic disorder that leaves people unable to tolerate sunlight. That movie would be "Moon Child," co-starring Emmanuelle Devos as a rival doctor and Quentin Challal as the stricken tween. It's a pulpy but undeniably compelling drama from writer-director Delphine Gleize that could definitely play the art-house circuit, and will be a whole lot worse when it's remade by Hollywood.

There are quite a few more Rendez-Vous titles I haven't seen that would seem to have at least some Yank-friendly appeal, from the always juicy André Téchiné's "Unforgivable," with André Dussolier as a mystery novelist and Carole Bouquet as his mysterious, bisexual new bride, to Ismaël Ferroukhi's "Free Men," which explores a Nazi-era scheme by Parisian immigrant Muslims to rescue North African Jews, to Delphine and Muriel Coulin's "17 Girls," a torn-from-the-headlines tale about a group of small-town teenagers who all decide to become pregnant at once.

Mind you, the case dramatized in "17 Girls" actually happened in Gloucester, Mass., not on the north coast of France, which brings us back to "The Artist" and the fact that Franco-American cinematic relations have always been complicated -- going back to Thomas Edison and the Lumière brothers -- and have only gotten more so. There's no "Artist" in this year's French cinema lineup, and indeed there may be nothing quite like that ever again. There's also no big artistic breakthrough likely to set cinephiles buzzing. What I see instead is a French film industry that's growing in confidence and commercial ambition (for better or worse) and that sees a chance, with Hollywood facing sequel bloat and worldwide recession, for a bigger slice of the pie.

Rendez-Vous With French Cinema continues through March 11 at the Film Society of Lincoln Center, the IFC Center and the BAMcinématek in New York.