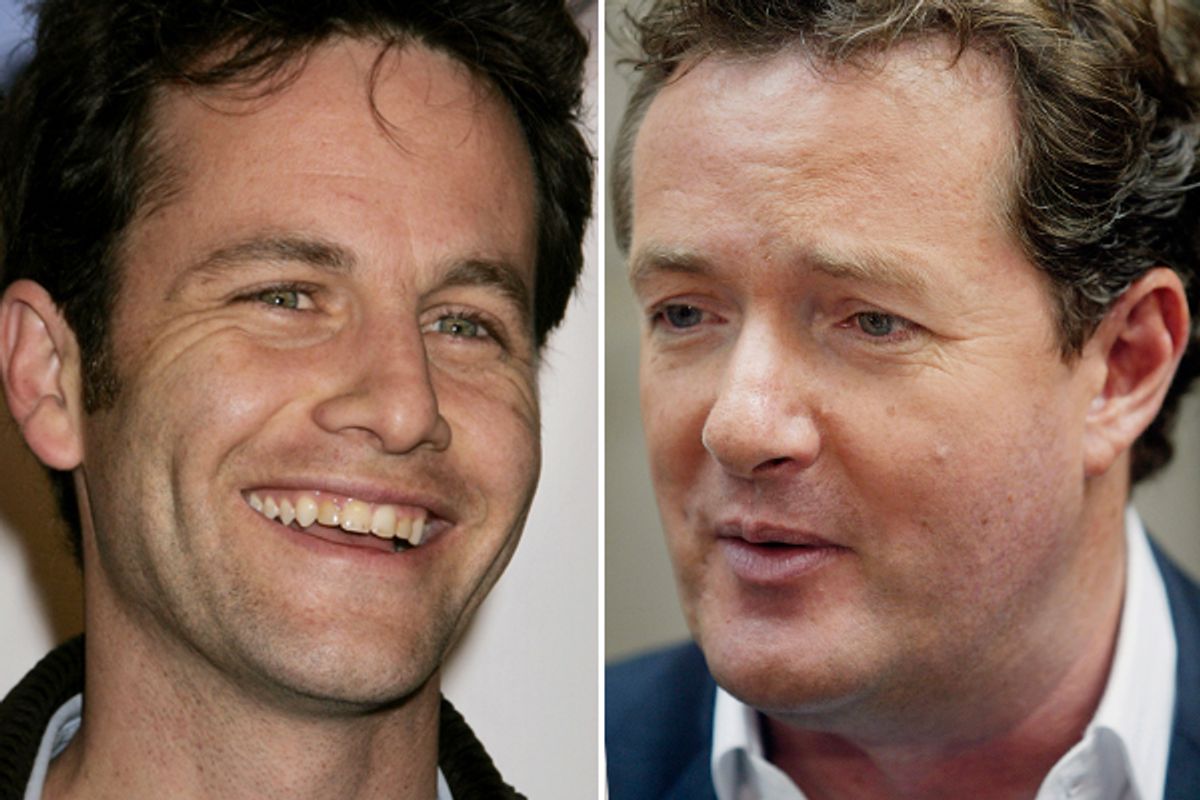 Having Piers Morgan call you brave is like having Rick Santorum call you smart. You've got to consider the source. So when the CNN host and Murdoch apologist told TMZ what he thought about former "Growing Pains" actor turned evolution naysayer Kirk Cameron's comments on Morgan's show Friday night, Morgan was restrained to the point of admiring. "He was honest to what he believed," Morgan said. "It's a very contentious issue. I think that he was pretty brave to say what he said."

And what, precisely, were Cameron's bold remarks? When prodded on the subject of same-sex marriage on Morgan's CNN show, the Christianity-themed movie star and father of six said that "I believe that marriage was defined by God a long time ago…. Do I support the idea of gay marriage? No, I don't." And when Morgan asked if he thought homosexuality was a sin, Cameron hedged a bit, refusing to use the word "sin" but declaring, "It's unnatural, it's detrimental and ultimately destructive to so many of the foundations of civilization." Maybe "sin" would have been a nicer way of putting it.

Cameron's remarks -- along with his assertion that if one his children came out to him, "I would say ... just because you feel one way doesn't mean you need to act everything you feel" -- were not greeted with universal applause. Over the weekend, GLAAD started a petition to "Tell Kirk Cameron it's time to finally grow up," calling him "out of step with a growing majority of Americans, particularly people of faith who believe that their gay and lesbian brothers and sisters should be loved and accepted based on their character and not condemned because of their sexual orientation." Perez Hilton, speaking for much of the Twitterverse, referred to the interview as a "spew" of "homophobia and bigotry." But as Hilton notes – and anyone familiar with Cameron's hyper-evangelical ways would likely agree – "Did anyone really expect less from him?"

That's where Morgan comes in. He knew exactly what a guy who's currently on a "marriage tour" -- and shilling a new documentary that says that "something is sick in the soul of our country" -- would say. It was not going to sound like the lyrics to a Lady Gaga song. Accepting a person's right to say things, even stupid things, isn't the same as condoning them. Speaking to TMZ, Morgan described Cameron's statements as what many would argue is "an antiquated view" and asserted, "I think that you can take the biblical thing too far." On CNN, Morgan told Cameron directly that if one of his own children admitted that he was gay, "I would say, 'That's great, son, as long as you're happy.'"

Unlike the even-more-loathsome Rush Limbaugh, Cameron wasn't going out of his way to personally attack an individual, or to denigrate anybody in the name of a repulsive stab at humor. He was just answering a question. Morgan is correct in his assessment that Cameron's response was an authentic one, and that there is a kind of bravery in that. It doesn't make that kind of thinking good or right or decent, any more than it makes Morgan less of a hack for noting it. We may be demoralized by Cameron's answer, and rightly decide that such rhetoric needs to be challenged. We can refuse to support his films. But in the fight against intolerance and hypocrisy, what we can't do is ask a man a question point blank -- and then be outraged when he answers it truthfully. All we can do is fervently hope that with the right amount of tolerant persuasiveness, one day he might be able to give a different one.