The small, sexist joke that became a big deal

A crass laundry label sets off a social media firestorm 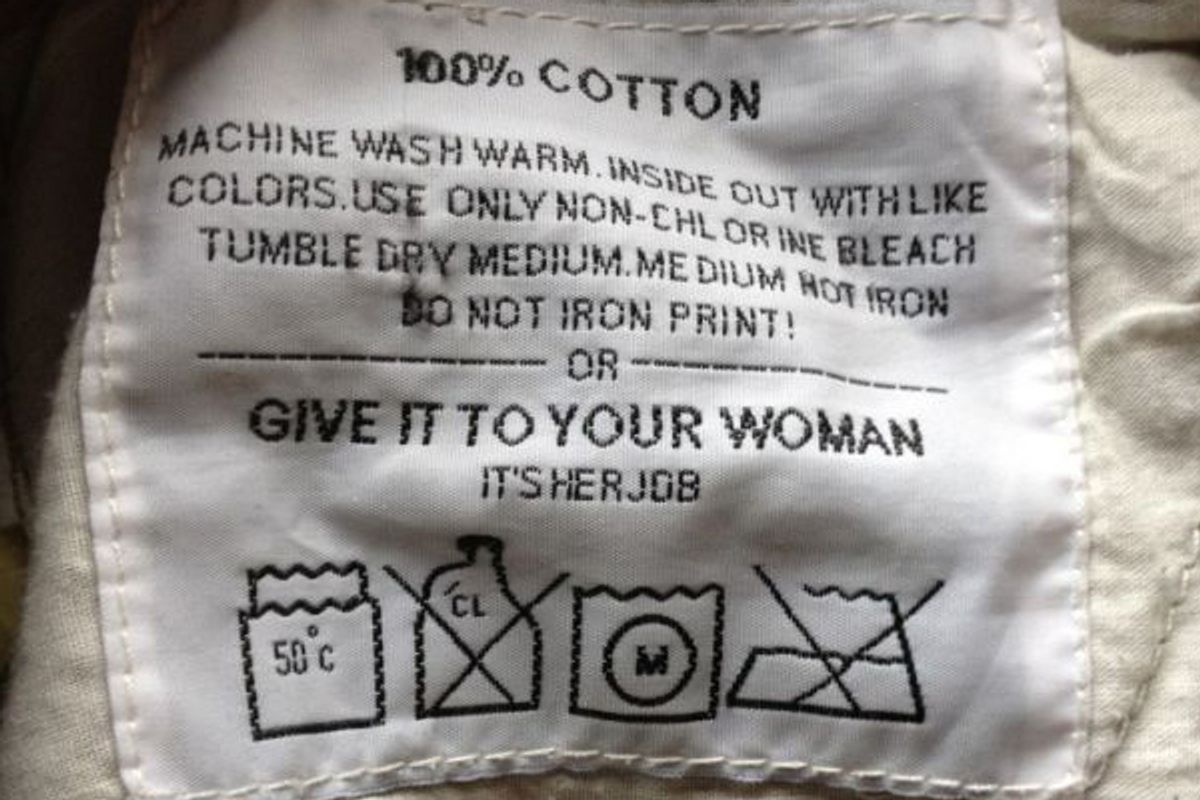 There's something odd going on inside Telegraph writer Emma Barnett's boyfriend's pants. She might never have discovered it had he not left his trousers on the bedroom floor this weekend, and had a peculiar message on the care instructions not caught her eye. Apparently Madhouse trouser wearers can go one of two routes in washing their pants: the old "machine wash/tumble dry" one or, as Madhouse implores dudes: "Give it to your woman – it's her job."

Much like J.C. Penney's recent "Too Pretty to Do Homework" shirts or, more revoltingly, Topman's  line of rape apologist wear, the revelation that somewhere, men's trousers are telling them to pawn off their dirty laundry on the nearest set of ovaries was not met with universal amusement. On Monday, Barnett tweeted a photo of the tag, saying she was "so shocked at this label in my boyfriend's new trousers."

She wasn't the only shocked one. As the image was retweeted across the world, it was declared "horrible" and a "disgrace" by disgusted consumers. But even more horrible were the other commenters -- the ones who blithely pleaded that they were "not sure what the issue is here" or told her to get back to doing the wash.

As Barnett then elaborated in her column, "If the comment had been remotely funny – I would have been the first to laugh and shrug it off … But it was the lack of any implied humour and the horrible surprise of such an incongruous message hidden away inside some trousers, that left me just plain stunned." There's nothing like trying to explain why a joke isn't funny to make it even less funny, but here's the thing – a sneaky little jibe, one that implies that every man has a woman and every woman does his laundry, isn't a joke. It's just a flat, dumb and, yes I'm going to say because I guess I'm just a humorless feminist, sexist comment. It's a put-down. One that smacks of entitlement and disdain. One that says, "The man who wears these pants really wears the pants." Which is a pretty bold boast for a cheap pair of ugly chinos, if you ask me.

Barnett said her beau purchased the pants from the discount men's clothing store Madhouse last month. The company has since issued the statement that "The chinos in question are manufactured by a jeans brand that we stock but the care instructions on this product were not proofed by our buyers," adding that "the wording was not instigated or ordered by Madhouse. The wording is clearly meant as a joke but now it has been pointed out to us it is something we will need to be more careful about in the future."

In the greater scheme of things, someone's lame idea of a funny pants label is not on par with trying to wrest away our reproductive rights or calling us whores. But if you want to know why it matters, look no further than the comments to Barnett's own story (or, I'll wager, in about 10 minutes, on this one). The crass "Oh, shut up." The blowjob jokes. The surprise that the writer is neither an "idiotic teenaged girl" nor "horse-faced schoolmarm." The exasperated "For God's sake, grow up" and "Calm down, dear." And the accusations, again and again, of that notoriously humorless feminism.

See, this is what we deal with. Every time women point out stereotypes and insults, when we say that we aren't entertained by the status quo, when we call BS when it rears its head, we are inevitably met with even more and bigger of the same. We're greeted with a hearty "Get a sense of humor" or a dismissive "What's the big deal, sweetie?" We're maligned and mocked, told to keep quiet and "pick your battles." But the small battles count too. They count because every time we let them slide, we grant tacit approval to a culture of hostility. We say that a real man doesn’t respect women, and a real woman keeps her mouth shut. We tell our daughters to be quiet and pleasing and our co-workers to not make waves. We tell the bullies that they're winning.

With a simple, disgusted tweet, Barnett said to hell with all that. She distinguished between making a joke and being a jerk. She reminded us that if you think that you can't point out subtler forms of sexism and keep your eyes on the big battles at the same time, perhaps you're the one who's just not that adept at multitasking. And she proved that something as tiny as the tag in a pair of pants can speak volumes.