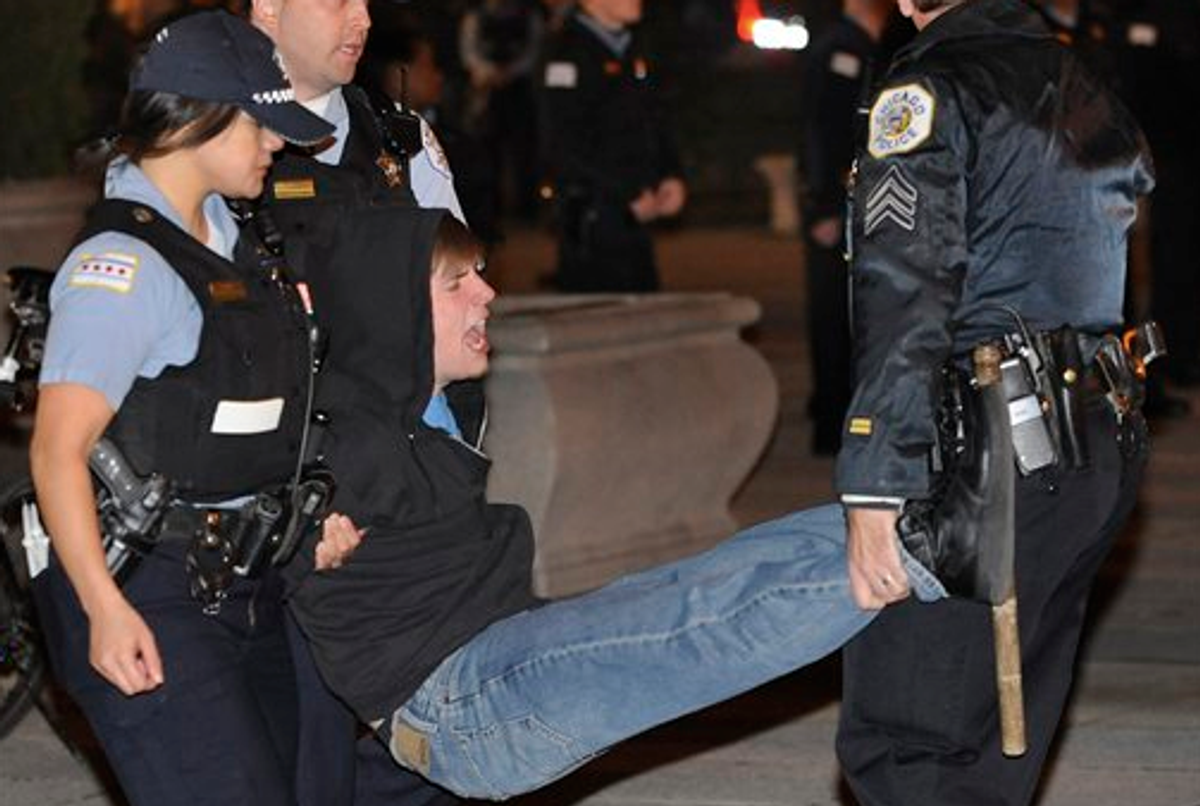 In this Oct. 23, 2011 file photo, a protester gets arrested during an Occupy Chicago march and protest in Grant Park in Chicago. (AP Photo/Paul Beaty,File)
--

The perfect storm seemed to be brewing over Chicago. With both the G-8 and NATO summits scheduled for mid-May, Occupy groups, anarchists and allies from around the world have been making plans to descend on the city, while Mayor Rahm Emanuel and the Chicago Police Department have been preparing to welcome them with strong arms.

But the White House has navigated a sea-change. On Monday night it was announced that the G-8 has been relocated to Camp David, the presidential retreat in rural Maryland. "To facilitate a free-flowing discussion with our close G-8 partners, the president is inviting his fellow G-8 leaders to Camp David on May 18-19," the White House statement announced. Protesters amping up for a "Chicago Spring" are reading a victory into the move; an admission from up top that tens of thousands of protesters would impinge on the "free-flowing discussion" between leaders of the world's largest economies.

Posts across Twitter ensure that Chicago and the NATO summit will still be the site of major demonstrations. Occupy Chicago's Twitter feed assured readers, "Don't worry. #Chicago will still be #EPIC this spring. We promise."

But Occupiers were not the only people surprised by yesterday's announcement. Chicago police chief, Garry McCarthy was not privy to the change of plans until Monday. "Um, yeah, it's very much a surprise. Honestly, I don't know much about it and I've got to get some facts," McCarthy told WLS radio.

The shift to the Camp David compound certainly turns the G-8 summit into a retreat. As writer and Occupy supporter, Kenneth Lipp, aptly tweeted, "Just in case someone was considering 'diversity of tactics,' you won't be able to fart within 10 miles of Camp David without seeing a laser."

Stay tuned for updates on how else this White House announcement might affect Chicago Spring and other Occupy plans.