Can a viral video save an obese man? 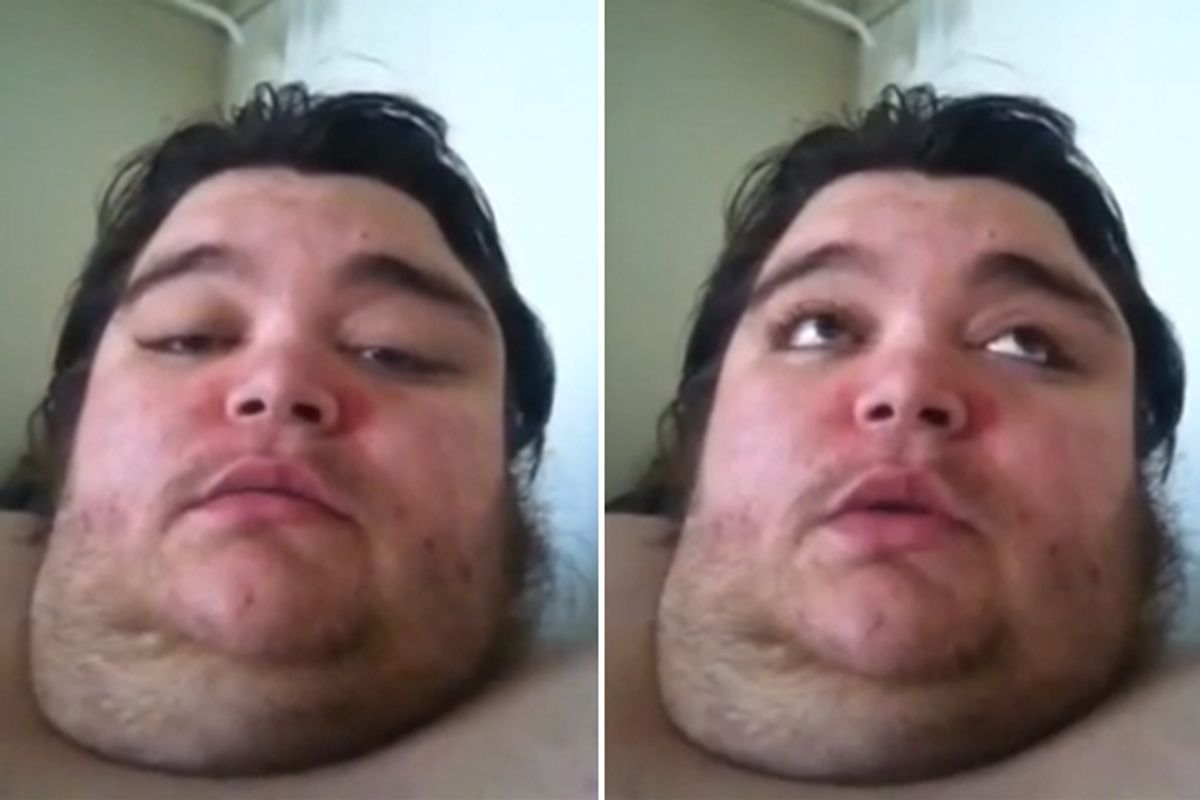 It's difficult to watch Robert Gibbs. But it has nothing to do with the fact that he weighs nearly 700 pounds.

In a candid and wrenching plea on the eve of his 23rdbirthday last week, the Livermore, Calif., man did something extraordinary. He braved the mockery and opprobrium of the entire Internet in the calculated hope of "trying to go viral" and turn his life around. In a clip self-explanatorily called "Overweight guy asks for help," Gibbs explains, "I'm making this video because I don't know what else to do. I've tried losing weight on my own. Tried doing everything possible. Been on diets, been hospitalized. Always done what needed to be done at the time and then I'd just gain the weight back."

Gibbs' first wish -- to go viral -- has already come true. Within 24 hours, Gibbs' video had over 200,000 hits. It's now surged well past a million. And after Gibbs mentioned Dr. Phil in his video, the show reached out to him and is reportedly paying a visit to his home Wednesday.

The rapidity with which a sincere, life-or-death request for help can be met by the global community is heartening. In addition to Dr. Phil's response, Gibbs received an offer of assistance from "transformation specialist" Chris Powell this past weekend. Gibbs has also been deluged with advice and supportive response messages, including a deeply heartfelt video from YouTube heavyweight Boogie2988, who tells him, "You're inspiring me ...You're making a good decision and you're making a healthy choice ... May you get everything you want."

But can the Internet truly save a man's life? And is going viral now the go-to solution to a seemingly insurmountable crisis? Gibbs is already declining to be interviewed because of a claimed "exclusivity agreement with 'Dr. Phil,'" a trust you can only hope the show will treat honorably. He has also opened himself up to the kind of vicious, evil, "fat people deserve to die" trolling upon which YouTube was built. So what happens when Dr. Phil or Chris Powell pack up their TV cameras and the television advice-givers and the social media support system move on to the next thing? You've got to wince at the sustained cruelty the man -- who says he has diabetes, sores all over his body, is on disability and believes he has depression -- is in for.

Maybe Gibbs will fare as well as the "golden voiced" Ted Williams, who after a few setbacks and false starts is now, a year after he was discovered panhandling in Ohio, working steadily and has a roof over his head. Or he may become another victim of an insatiable, novelty-seeking public and the opportunism of daytime talk. But what's certain is that this isn't a story about losing weight. It's about something much bigger. Robert Gibbs did not become morbidly obese overnight. A man who's been hospitalized in the past needs more than mere diet or encouragement.

Gibbs says in his video, "For everyone that's going to make fun of me, I really don't care. This is my last chance, my last hope. I'm really scared that I'm not going to watch my niece and nephew grow up and I'm never going to have a family of my own. I've never had a life." That's why it's hard to watch Robert Gibbs, even as millions of us continue to do just that. He's a fellow human being in pain, asking us to look past his exterior and truly see him. Asking us to do what he says he can't do for himself: to save him.