"Manning was subjected to cruel, inhuman and degrading treatment" and "excessive and prolonged isolation" 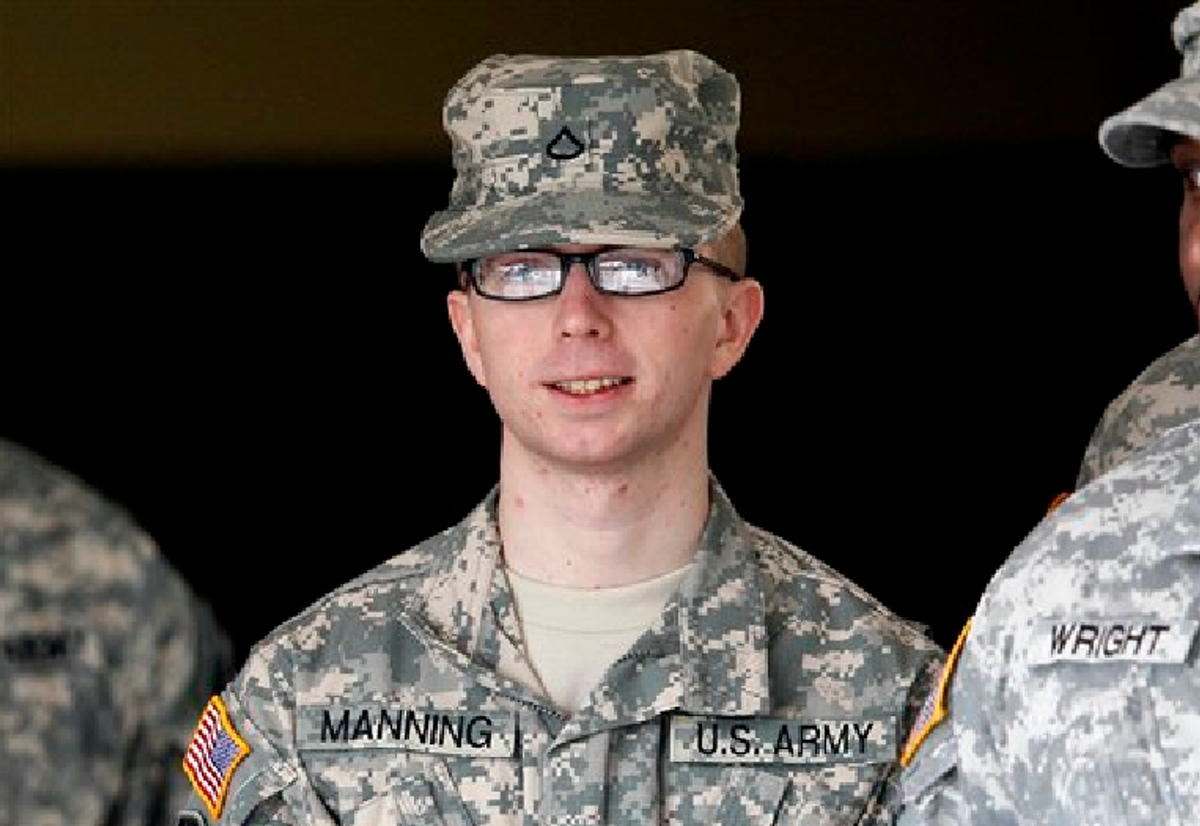 In December, 2010, the U.N.'s special rapporteur on torture announced a formal investigation into the conditions of Bradley Manning's detention that endured for the eight months he was held at a Marine brig in Quantico, Virginia. The Army Private has been detained since May, 2010, on charges that he leaked classified documents to WikiLeaks, but has not yet been tried. Yesterday, the U.N. official overseeing the investigation pronounced that "Bradley Manning was subjected to cruel, inhuman and degrading treatment in the excessive and prolonged isolation" to which he was subjected at Quantico. That official, Juan Ernesto Mendez, heads the U.N. office created by the U.N. Commission on Human Rights, bestowed with the mandate "to examine questions relevant to torture."

The extreme conditions of Manning's detention were first reported here in December, 2010, and included Manning's being held 23 out of 24 hours a day in solitary confinement for what had then been five straight months, along with other plainly punitive measures. Thereafter, Manning was stripped of his clothing and forced to stand nude for morning inspection, and a special Marine investigation (ultimately rejected by brig officials) concluded that "that Manning’s jailers violated Navy policy by keeping him on suicide watch after psychiatrists concluded he was not a threat to himself." In the wake of what had become a worldwide controversy that led to the resignation of the State Department's spokesman, Manning was moved in April, 2011, to Fort Leavenworth in Kansas, where his detention conditions apparently improved.

Over the past year, the U.N. torture investigator repeatedly complained -- including in official reprimands -- that his investigation was being obstructed by the Obama administration, which refused to provide unmonitored access to interview Manning. About this refusal to allow an unmonitored interview with Manning, the U.N. official said: "Such a condition violates long-standing rules that the UN applies for prison visits and for interviews with inmates everywhere in the world." In reporting on this U.N. grievance, The Guardian wrote: "It is the kind of censure the UN normally reserves for authoritarian regimes around the world"; indeed, "the vast majority of states allowed for visits to detainees without conditions." Just to underscore how unusual was this obstruction: the Bush administration allowed investigators with the International Committee of the Red Cross private interviews even with the most "high-value" detainees at Guantanamo: that is, once they emerged from the CIA "black sites" where they were kept for almost three years beyond the reach of the ICRC (see p. 3 of the ICRC report).

Despite this obstruction of his investigation, the U.N. torture rapporteur, speaking at a  U.N. Human Rights Council meeting in Geneva, condemned Manning's treatment as "cruel, inhuman and degrading treatment," specifically citing "the excessive and prolonged isolation he was put in during the eight months he was in Quantico." He also rejected the defenses offered by Obama officials for what was done to Manning: "the explanation I was given for those eight months was not convincing for me."

Once the oppressive conditions of Manning's detention were reported here, an intense controversy resulted. In January, 2011, Amnesty International wrote a letter to then-Defense Secretary Robert Gates protesting that the conditions "are unnecessarily severe and amount to inhumane treatment" and "breach the USA’s obligations under international standards and treaties." In March, State Department spokesman P.J. Crowley was asked at a small Q-and-A session at MIT by a PhD student: "There’s an elephant in the room during this discussion: Wikileaks. The US government is torturing a whistleblower in prison right now." Crowley replied by denouncing the abuse of Manning as "ridiculous and counterproductive and stupid.” That, in turn, led to President Obama's being asked at a Press Conference about Crowley's criticisms by ABC News' Jake Tapper (Obama replied that brig officials "assured" him Manning was being handled properly), and to Crowley's "resignation" shortly thereafter.

Beyond human rights groups and the U.N., criticisms over Manning's detention condition were widespread and vehement. Leading newspapers editorialized against it, with the LA Times denouncing it as "inhumane," while The New York Times, under the headline "The Abuse of Private Manning," editorialized that the Obama administration" has been treating [Manning] abusively, in a way that conjures creepy memories of how the Bush administration used to treat terror suspects. Inexplicably, it appears to have President Obama’s support to do so." The NYT Editors added: "Far more troubling is why President Obama, who has forcefully denounced prisoner abuse, is condoning this treatment."

The only support for Manning's treatment came from far-right neocon outlets that have long reflexively supported torture [The Weekly Standard (“Don’t Cry for Bradley Manning”) and RedState (“Give Bradley Manning His Pillow and Blankie Back”)], along with Obama's hardest-core, the-Leader-does-not-err followers who echoed those neocons almost verbatim, such as this front-page writer at the liberal blog Crooks & Liars ("the meme o the day seems to be on Manning’s so-called torture, to which I say 'boo hoo"), and this former Obama campaign press aide and current daytime MSNBC contributor ("Bradley Manning has no pillow??? GTFOH!"). It's revealing indeed how often those two factions are in lock-step agreement. Atrios asked the right question about such individuals here.

It is remarkable that the administration of President Obama, who repeatedly railed against and vowed to end detainee abuse, first obstructed the investigation of the U.N.'s top torture investigator, only to be now harshly condemned by that investigator for "cruel, inhuman and degrading treatment": treatment that endured for eight full months until the controversy became too intense to permit it to continue any longer. Last month, it was announced that Manning was one of 231 individuals officially nominated for a Nobel Peace Prize by at least one person with formal nominating rights vested by the Nobel Committee. In a Guardian Op-Ed in December, I argued that the abuse of Manning was part of the larger war on whistleblowers being waged by the Obama administration, and that "for what he is alleged to have given the world, Manning deserves gratitude and a medal, not a life in prison."