Will Newt give up if he starts losing the Old South?

He can't keep this up forever, right? 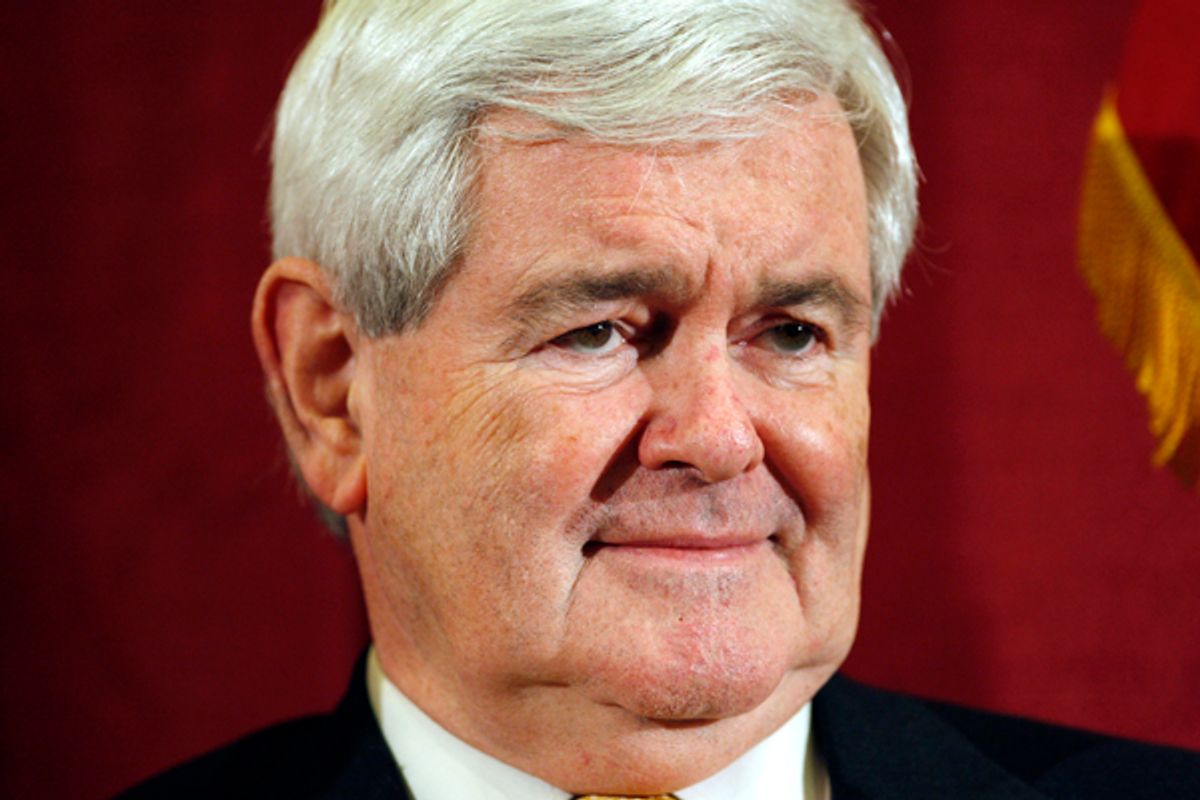 Newt Gingrich's "path to the nomination" is basically a Billy-from-The Family Circus-style dotted line through his rich fantasy life, but he's remaining in the race for the time being, because he performs well in the Old South, where likely nominee Mitt Romney does not. There is also a weird casino billionaire who keeps funding his campaign, maybe in part because he thinks it aids Mitt Romney by hurting Rick Santorum.

Well, Newt Gingrich remaining in the race might be hurting Rick Santorum, but by no means would Rick Santorum be winning if Gingrich wasn't around. Give Santorum all of Gingrich's delegates, he's still losing to Mitt Romney. More realistically, as Nate Silver wrote earlier this morning, no Newt would mean more delegates for Rick and Mitt.

Still, Newt's excuse for remaining in the race (besides as a means of confounding the "elite" who are terrified of his multitude of big ideas) is that the GOP nominee needs to win the South, and only he can win the South. He is basically campaigning right now solely to win Mississippi and Alabama next Tuesday.

But polls now show Mitt Romney beating Gingrich in Alabama. Alabama State University's Center for Leadership and Public Policy has 22.7 percent for Santorum, 18.7 percent for Romney, and 13.8 percent for Gingrich. The Alabama Education Association has Romney winning at 31 percent with Gingrich 10 points back.

I haven't seen any recent polls in Mississippi, but Rick Santorum's super PAC is spending big in both states.

Losing either Alabama or Mississippi -- or both -- would be bad news for what everyone has taken to calling Newt Gingrich's "Southern Strategy." (I am guessing half the people mentioning Newt's "Southern strategy" on Fox every day have no idea what they're referring to and the other half know perfectly well and think it's funny.) It would effectively end his campaign, even if for some weird reason Gingrich decided to just keep going for a while longer, because he has some weird point to make.

Gingrich is either exhausted or still enjoying himself, depending on how you read his dancing with his wife to "Rocket Man" last night. ("The song evokes Gingrich’s support for space exploration and desire to develop a colony on the moon," according to the Post.) He certainly hates Mitt Romney and believes that The People will eventually see the brilliance of Newt Gingrich if only he's given a national platform. But I'm not sure Gingrich is insane enough to continue past next week. He has already achieved what was arguably his primary goal in running: significantly increasing his earning power.