The Mad Man rails against idiocy and reality TV -- can we get an amen? 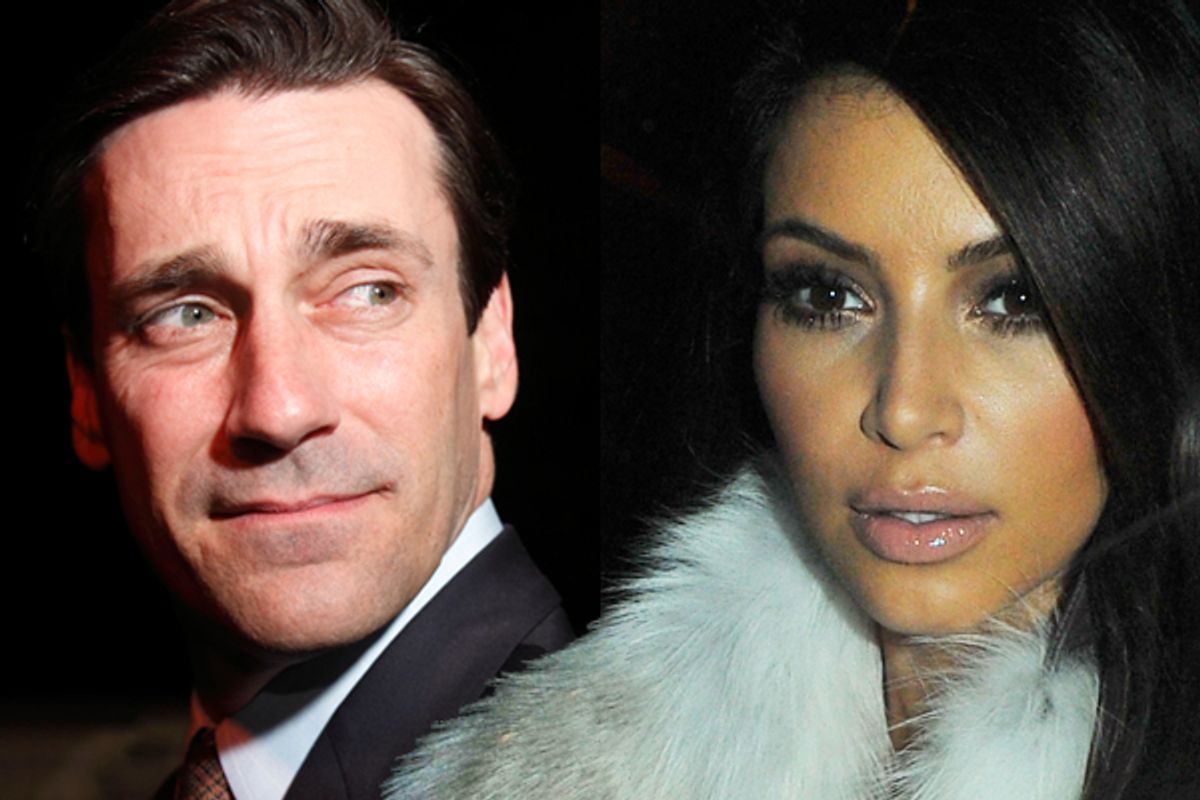 Don't ever change, Don Draper. In an instantly notorious interview for the U.K. edition of Elle magazine, World's Greatest Dreamboat and former Salon Sexiest Man Jon Hamm has dared to admit that the appeal of reality TV stars "doesn't make any sense" to him, and that "Whether it's Paris Hilton or Kim Kardashian or whoever, stupidity is certainly celebrated. Being a f***ing idiot is a valuable commodity in this culture because you’re rewarded significantly." And faster than you can pour your third martini, the tabs have been lapping up that money quote as evidence of a celebrity feud.

Sure enough, the woman who was Mrs. Kris Humphries for 72 days swiftly banged out a reasonably articulate response Monday, tweeting that "I respect Jon and I am a firm believer that everyone is entitled to their own opinion and that not everyone takes the same path in life. We're all working hard and we all have to respect one another. Calling someone who runs their own businesses, is a part of a successful TV show, produces, writes, designs, and creates, 'stupid,' is in my opinion careless." She then promptly tweeted four pouty photographs of herself as she publicly mused how blond she ought to go. And ... the prosecution rests, America.

Kardashian is correct that we all have our paths in life, and all things considered, she displayed ample restraint in response to being called an idiot. It certainly takes cleverness and ambition to run an empire that runs the gamut from perfume to what we're going to generously refer to as singing. But come on. Isn't it a little ballsy to call yourself a "writer" based on the roman a clef you and your sisters put your name on? Does being a designer mean getting so heavily inspired you're slapped with a cease and desist for your familiar-looking wares? And do you get to call yourself a producer for getting an executive credit on a reality show that ran eight episodes?

Sure, maybe Kim is accomplishing more in her career than just getting married on television. I'll save you the trouble and insert the obligatory reference to her charity work here. But Hamm is on to something, folks. Kardashian is first and foremost a woman who gets paid to panic on cable TV about how itchy her Botox makes her. She exists within a country where a man can run for president and actually win a few primaries on the notion that wanting our citizenry to go to college makes a person "a snob" who's trying to "indoctrinate you." One in which rich, powerful men with long-running radio shows can spend three days of airtime not understanding how birth control works. Where we act like we can take down a warlord by liking a movie on Facebook. Where 52 percent of Mississippi Republicans think that the president of the United States is a Muslim. Fifty-two percent.

Jon Hamm isn't saying that that's Kim Kardashian's fault. But a woman who thinks the "the worst thing on the planet" is women who wear the wrong shade of foundation, who's disgusted over public breas-tfeeding, and who has a staunchly adversarial relationship with the apostrophe may not be doing wonders to raise the collective IQ. She's not the sum of our stupidity. She's just a fabulously successful product of it.