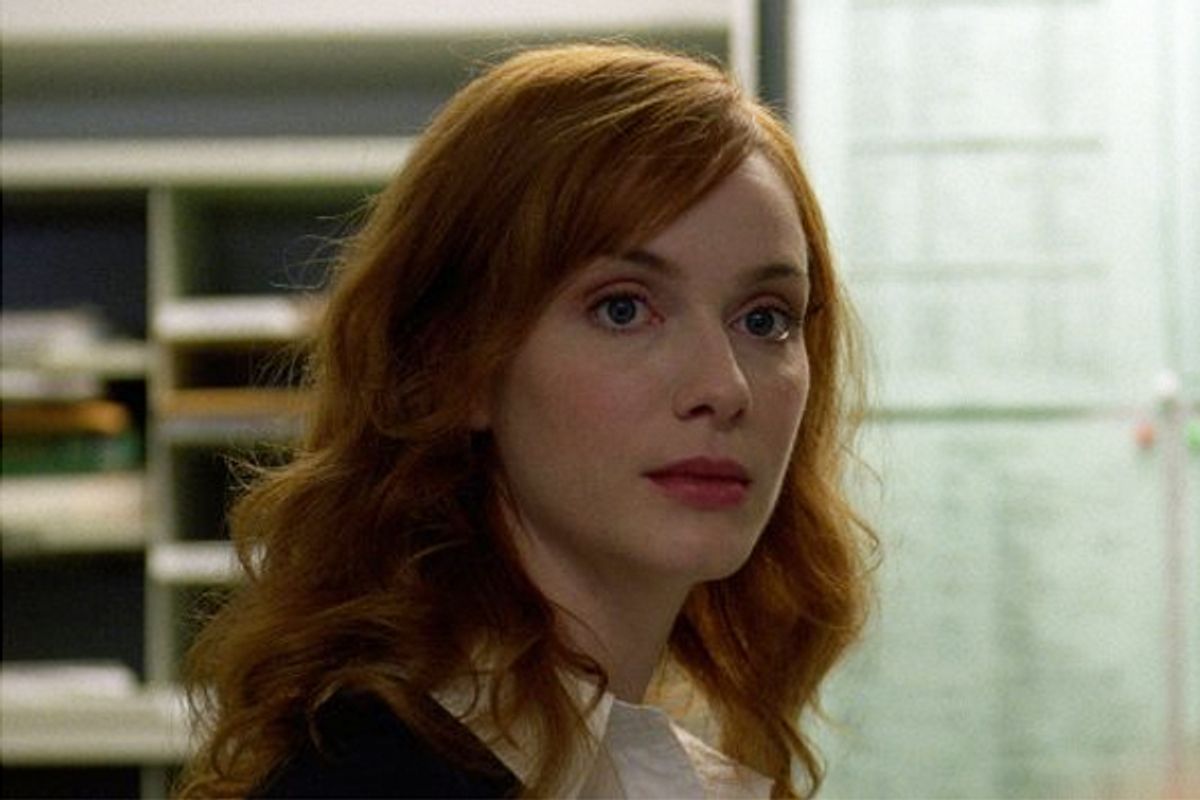 The turning point in Tony Kaye’s new movie, “Detachment” — which, despite many nameable flaws, is a wrenching and powerful achievement — comes when Lucy Liu, playing a high school guidance counselor, suffers a major breakdown in front of a student. It’s easy to be callous, she shrieks at the bored and bewildered girl in front of her, easy not to give a crap. What takes courage is actually caring about yourself and the world. Sure, you can call that a hackneyed sentiment, and it's easy to get hung up on the fact that this scene, like most of "Detachment," is delivering a familiar kind of message in a familiar setting (the quasi-inspirational American high school movie). But two things redeem the scene, at least for me: 1) What Liu says is absolutely true, and it is one of the central problems in contemporary life, and 2) she’s not saying it from some position of cool, removed wisdom; she’s pissed off, filled with rage, and completely losing her grip in front of a girl whose only crime was announcing that she doesn’t care about school and wants to be a model.

“Detachment” was the biggest conversation piece at last spring's Tribeca Film Festival, and is finally getting a theatrical release thanks to the festival's distribution arm. It’s an easy film to pick apart, a scattershot, melodramatic would-be epic set in and around a New York high school, with an ensemble cast headed by Oscar-winner Adrien Brody, who plays a substitute teacher struggling with his own barren emotional life. (It also features Christina Hendricks, James Caan, Marcia Gay Harden and Blythe Danner, along with Liu.) This is an everything-but-the-kitchen-sink movie, in several genres at once, with a level of ambition that suggests Fellini mixed with Orson Welles. (I'm not claiming it hits that mark, necessarily.) Kaye blends animated sequences along with dreams, memories and fantasies, snippets of documentary interviews with real-life teachers, dogmatic lectures about the failings of our society, and quotations from Albert Camus and Edgar Allan Poe. Carl Lund’s screenplay hits a lot of flat notes and the acting is uneven. Ultimately I didn't care about the multifarious flaws of "Detachment" — I was swept along by the spectacular visual journey and the wrenching emotional experience. People will either love “Detachment” or hate it, and either way it provides powerful testimony to the unrivaled passion and undiminished craft of Tony Kaye, whose notoriety within the movie industry is matched by his near-total invisibility to the general public.

If you’ve heard of Kaye at all, it’s almost certainly because of his 1998 debut feature “American History X,” which is now a revered cult film but was a historic flop on its initial release, plagued by an entertaining and highly public three-way feud between Kaye, star Edward Norton Jr. and distributor New Line Cinema. Kaye tried to get his name taken off the film and replaced with the credit “Humpty Dumpty” (even threatening to legally change his name to that effect). He reportedly suggested — after the film was shot, edited and in the can — commissioning a new script from Caribbean poet Derek Walcott and starting over again from scratch.

Once you start with the Tony Kaye stories, you don’t want to stop. He then spent $100,000 of his own money on ads in the Hollywood trade papers abusing Norton and the film’s producers. Which I guess echoes the time, years earlier, when— as a nearly unknown director of British TV commercials — he bought an ad in a London broadsheet announcing that “Tony Kaye Is the Greatest English Director Since Hitchcock.” Kaye once shot more film for a 30-second Volvo commercial than Woody Allen had used in making “Hannah and Her Sisters.” At the peak of his advertising success in the mid-’90s, he used to buy one of every item in the seasonal Comme des Garçons catalog. As he told a British interviewer a few years ago, “I did a lot of very insane things. A lot of very, very, very insane things.”

With his filmmaking career in ruins after the “American History X” debacle, Kaye briefly came under the wing of Marlon Brando, who hired him to film a series of seminars Brando was leading with Michael Jackson, Sean Penn and Jon Voight. (Of all the unfinished Kaye projects, that one may be the weirdest.) But Kaye’s penchant for showing up at Los Angeles nightclubs dressed as Osama bin Laden — in the fall of 2001 — succeeded in alienating even the legendarily antisocial Brando, who died before the two could reconcile. So began Kaye’s period in the outer wilderness of the entertainment industry, before he began to work his way back by completing his memorably gruesome 2007 abortion documentary “Lake of Fire,” most of which had actually been shot during the culture wars of the Clinton administration.

I’m not Tony Kaye’s shrink and I’m not sure it’s worth speculating about why he did all the crazy things he did; when I interviewed him at the time “Lake of Fire” was released, he explained it all as a kind of act, in emulation of idols like Erich von Stroheim or Francis Ford Coppola. “All the work of the directors I really liked,” he said, “those directors seemed to be tyrannical, egotistical, arrogant, mad. They were my gods, so I thought, ‘Well, I’d better be like that.’ I’m not really like that.” That sounds like clear-sighted rearview analysis, but I’m not sure it’s adequate. When I ran into Kaye last year in the Tribeca festival's press room, I didn’t recognize him. When we met in 2007 he was bald and clean-shaven, but by 2011 he had long hair and a shaggy beard in the mad-monk Rasputin vein, and was approaching journalists with a hand-lettered paper sign that read, “I HAVE A SPEECH PROBLEM. MY NAME IS TONY KAYE (‘American History X’). I WANT TO TALK TO YOU ABOUT MY MOVIE ‘DETACHMENT.’” I have to ascribe that to the basic Tony Kaye modality that's half ironic and half sincere, partway between performance art and publicity stunt. (It's true that Kaye had a speech impediment in childhood and says he avoids talking on the phone to this day. But he can conduct an ordinary conversation perfectly well.)

Yes, it would be great if we could talk about “Detachment.” Kaye is such an intriguing and irresistible character that he throws his own movies into the shade, and that’s not serving his interests or anybody else’s. In announcing himself as the greatest English director since Hitchcock back in 1980-whatever, Kaye was being an arrogant jackass, but his insight into his own potential wasn’t incorrect. In some alternate universe a few ticks away from ours, things went a little differently before or during or after “American History X” and Kaye is now widely seen as one of the greatest living mainstream filmmakers, along with Scorsese and the Coen brothers and David Fincher and whomever else you’d like to nominate.

But that universe isn’t this one, and it’s anybody’s guess how much of a comeback Tony Kaye can mount at age 58, with the manner of a 19th-century European anarchist and a heavily allegorical high school drama that’s going to sound, the more I describe it to you, like about seven (or 17) other movies you’ve already seen. "Detachment" has a terrific central performance from Brody, probably his best since winning an Academy Award for “The Pianist.” What became of Brody's career is probably worthy of another article. How did this sly, seductive, intelligent actor with the impressive honker slide so far and so fast from Oscar-land that he's selling electric razors on TV, and trying to make a comeback alongside Tony Kaye? Many of the other elements in the film, however — the sympathetic fellow teacher Brody's character starts dating (Christina Hendricks), the hardass but well-meaning principal (Marcia Gay Harden), the teen hooker Brody adopts off the street, with predictable and semi-disastrous consequences (newcomer Sami Gayle) — seem like stock archetypes, at least until you actually sit down and watch the film.

I'm absolutely not promising that you're going to love "Detachment"; it's a frustrating film in many ways, but one that plays to my admitted prejudices (which include tremendous affection for both Kaye and Brody). But you won't regret watching it, partly because Tony Kaye has more cinematic talent than a great many more famous directors, but even more because of what he can do with it, even in a highly imperfect movie that uses the pointless but noble struggle of high school to stand in for lots of other pointless and noble forms of struggle, like making art and being alive and trying to pursue the things you love even (or especially) when the world is ignoring you. What I take away from Tony Kaye’s struggle is that he may have been a difficult personality — and may still be one — and expended way too much energy early in his career on behaving like a jerk. But he has never, ever, surrendered to cynicism or callousness. He cares passionately and prodigiously about this movie and everything else he’s ever done, arguably too much. If he has thrown away a promising career as a result, then his failure is better than most people’s success.

"Detachment" opens this week in New York; March 23 in Los Angeles; and March 30 in Dallas, Palm Springs, Calif., Phoenix and San Diego, with more cities to follow. It's also available nationwide on-demand from many cable and satellite providers, VUDU and iTunes.