HBO's prestige drama gets canceled abruptly over animal welfare concerns. For a show about betting, it feels right 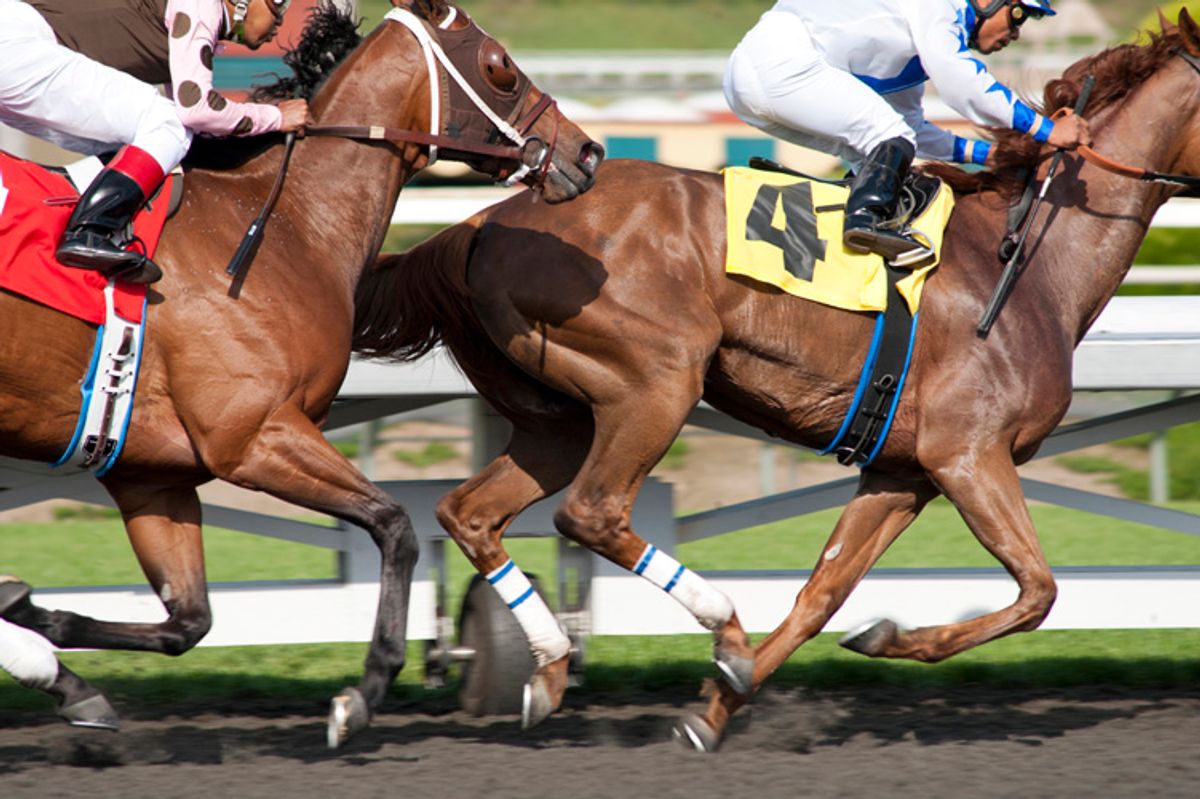 HBO’s “Luck” was supposed to be a thoroughbred. The nine-episode drama about the Santa Anita horse track and the colorful crew of broken-down individuals who frequent it arrived with quite the pedigree: it was written by that maestro of oratory and eccentrics, David Milch (“Deadwood,” “NYPD Blue”), directed by that connoisseur of palm trees and bright lights, Michael Mann (“Miami Vice”), and starred Dustin Hoffman in his first TV role. But last night, the low-rated “Luck," already shooting its second season, canceled itself.

After a third horse was euthanized following a head injury (last season, two horses were put down following injuries sustained while racing for the show), HBO decided to end production. The episode airing in two weeks, which was supposed to be the season finale, will now be the series conclusion. In the days to come there will be more news on just how much “Luck’s" poor ratings impacted this decision. The show, despite all its talent, was attracting about 500,000 viewers a pop, which is not much. HBO renewed it anyway, but when they looked ahead to all the potential liability issues, there may not have been a strong incentive to continue. (As someone noted on Twitter, it’s hard to imagine “Game of Thrones” getting canceled over the deaths of some wolves.) But in canceling "Luck" HBO made the right call, and not only for the health of the horses and its bottom line: It may take some getting used to, but it’s almost too perfect that a show about the vagaries of chance would abruptly, unexpectedly end.

“Luck” is the second David Milch show to be summarily truncated (third, if you count the one-season spiritual surfer experiment “John From Cincinnati”), and like “Deadwood,” which finished its third season and then wasn’t renewed for financial reasons, “Luck” won’t have a traditional series finale. But “Luck’s" last episode does provide some closure — the conclusion of the major racing story line of the season — and doesn’t end on a cliffhanger. I’m one of the small number of viewers who liked and continued to watch this show (at some point I caught myself standing on a chair hollering for a particular horse to win), but I find that I don’t need to know what happens next, even though I would have been happy to watch another season. The pleasures of “Luck” aren’t really plot-related, they’re atmospheric and linguistic, the chance to observe, from a safe distance, the assortment of hard-living, well-meaning weirdos who make up the cast. And in the finale, the characters’ arcs are acceptably, if not definitively, wrapped up. It’s as if on a trip to Vegas, your car got a flat in Reno, and you realized you might as well stay there: It’s not where you thought you were headed, and maybe the slot machines don’t have a big dramatic million dollar payout, but, hey, they still spit out money.

One of the greatest barriers to entry on “Luck” has been the combination of horse racing — a strange semi-legal ecosystem most people know nothing about— and Milch’s notoriously florid dialogue. In the first episode, the language was so opaque and rapid-fire, with horse-racing slang making up so much of the patter, it almost amounted to a “Clockwork Orange”-style dialect, with hardly any of “Deadwood’s" useful, signpost-like epithets to put over the lines’ basic meaning. (Not helping the comprehension: Nick Nolte, who seems to have traded in his vocal chords for tectonic plates.) For those who stuck around through “Luck’s" fourth episode, the linguistic fog did begin to lift, with the impenetrable verbiage eventually doing what it was meant to, burnishing this particular universe of jockeying jockeys, persnickety trainers, good-for-nothing gamblers, and soignée gangsters by making them spectacularly singular talkers.

This is the same trick that Milch pulled off in "Deadwood." But if "Deadwood" was about the making of America — the corralling of lawlessness and language, the turning of marginal creatures into citizens — in "Luck," America’s already made, and those citizens who happen to lean toward the low life are outsiders, except at the track, where this is still the land of the free to bet on horses and the home of the brave-talking oddballs. It’s entirely fitting that these characters — an ex-con with trust issues, a trainer who likes horses more than people, four sweet, loser gambling addicts, a suicidal, stuttering shmendrick, a plucky Irish lass, and a rumbling, grumbling, heartbroken wild man, among others — would get their show canceled right out from underneath them. It’s exactly the kind of thing that’s been happening to these folks — down on their luck if occasionally lucky — their whole lives. And it’s exactly the kind of bad luck they, if not TV audiences, have learned to accept as a necessary corollary to the good. Sometimes, you bet on the wrong horse, and instead of a long-running series, you get nine self-contained episodes of television. The only thing to do is bet again.