There is one country for which "human life is already cheap." It's not Afghanistan 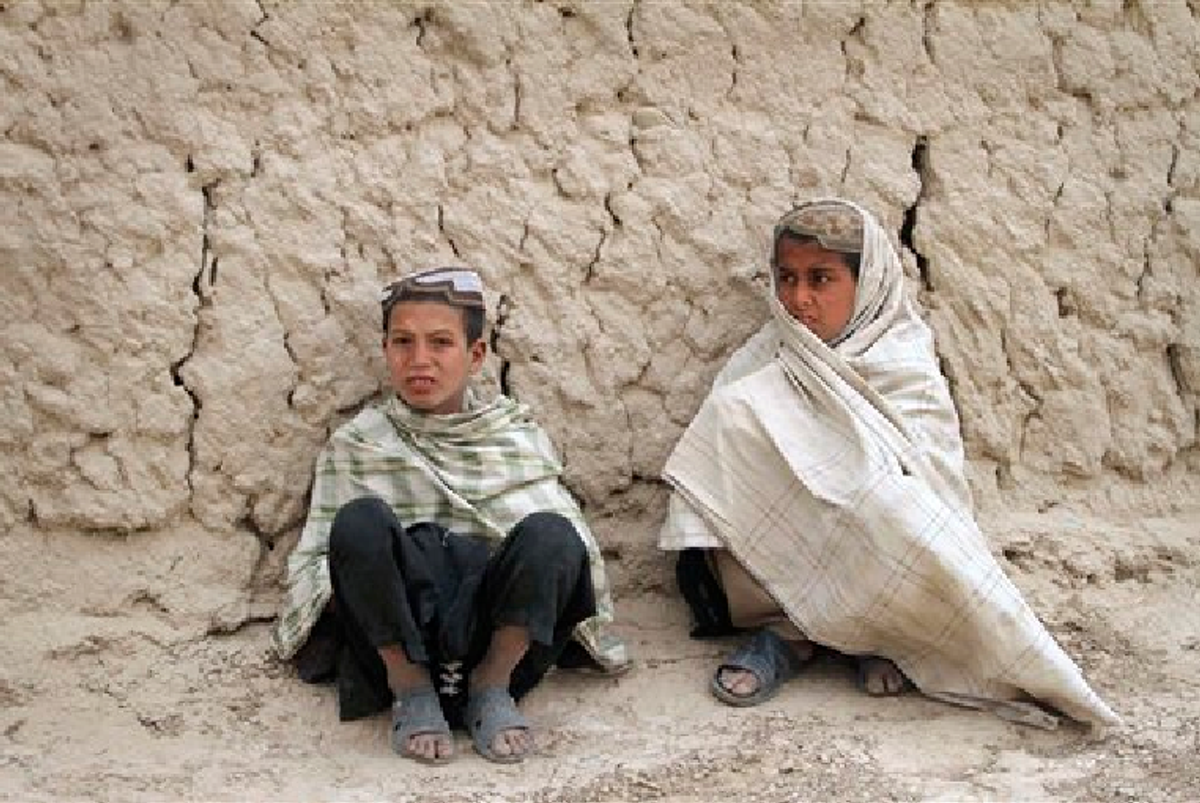 Afghan boys sit on the ground near the scene where Afghans were allegedly killed by a U.S. service member in Panjwai, Kandahar province south of Kabul, Afghanistan, Sunday, March. 11, 2012. (AP Photo/Allauddin Khan)
--

The New York Times yesterday conveyed important and exciting evidence of American progress in Afghanistan which I believe we can and should all find inspiring; it concerns the reasons the protests in Afghanistan over the slaughter of 16 villagers by a U.S. soldier were not as intense as feared:

Many observers say, the Americans have had a lot of practice at apologizing for carnage, accidental and otherwise, and have gotten better at doing it quickly and convincingly.

I don't mind admitting that I beamed with nationalistic pride when I learned of our country's impressive evolution: our nation's government is so practiced in "apologizing for carnage" that it's becoming a perfected art. This pride become particularly bountiful when I heard NPR's Morning Edition host Steve Inskeep yesterday talk to The Washington Post's Rajiv Chandrasekaran about the same topic and I learned how much worse the Afghans are by comparison (h/t dubo6254). First, Chandrasekaran observed that the level of anger in Afghanistan over their dead civilians isn't nearly as intense and widespread as it is among Americans:

INSKEEP: Rajiv, you were noticing that the response to this in Afghanistan has been a little bit less than with the Quran burnings, say, in which no one was killed.

CHANDRASEKARAN: Yes. At least in the first few days, the level of protests have been far lower over there than there have been in the immediate wake of that. And it poses an interesting question. Obviously, over at home here in the United States I think people's sense of revulsion at this act, the shooting, has been far greater. And you're wondering why aren't we seeing that same sort of reaction in the streets of Kabul, for instance.

Yes, "obviously": the angry protests in American streets over the killing of these Afghan civilians were scary indeed. Unlike in Afghanistan, where they really don't seem to mind, almost every American city was engulfed this week by turmoil and disruption as infuriated Americans took to the streets to rail against the ongoing slaughter by their government of civilians in Afghanistan. Indeed, "people's sense of revulsion at this act" in civilized, life-cherishing America is "far greater" than in Afghanistan: Americans are just up in arms about it, besides themselves with rage, just like they always are when their government yet again extinguishes the lives of innocent civilians. The unrest sweeping America this week over this incident is probably the most tumultuous since that dark week of frightening protests back in December, 2009, when violent anti-war marches broke out in American cities over Obama's cluster bomb and Tomahawk missile attack in Yemen that killed dozens of women and children. Kevin Drum this week accurately recalled the levels of American rage over the ending of that innocent human life:

Obama has suffered, as near as I can tell, literally zero embarrassment from this episode. The al Majala attack got a small bit of media attention when it happened and has been completely forgotten since [in the U.S., that is; it caused intense rage in Yemen and is still very well-remembered there].

So as we can see, while Afghans don't seem to mind civilian slaughter -- as evidenced by the less-than-robust street protests in Kabul -- Americans actually cherish human life and thus will simply not tolerate it. Indeed, many Americans still suffer nightmares over the society-threatening disruptions that resulted in their country from the news that a U.S. drone attack killed 16-year-old, Denver-born, American citizen Abdulrahman al-Awlaki and his teenage cousin in Yemen a mere two weeks after another drone killed his American father. The citizen fury over the killing of that innocent American teenager, incited by wall-to-wall coverage of Abdulrahman's death on MSNBC and CNN righteously denouncing the attack, raged for weeks on end, shutting down U.S. businesses and threatening oil routes.

NPR's Inskeep explained the underlying reason why Afghans, in contrast to Americans, appear to care more about the mere burning of Korans than these heinous deaths:

INSKEEP: Human life is already cheap, is what you're saying and religion is something that's a little more intense.

Totally: to those primitive, excessively religious Afghans, "human life is cheap," in contrast to Americans, who "have a lot of practice at apologizing for carnage." Chandrasekaran, a good reporter, did explain that Afghans have "become accustomed to news of Afghan civilians dying at the hands of American forces in the middle of the night" and that this most recent massacre is therefore nothing aberrational for them. But that's the point: there is a country here whose government is continuously extinguishing innocent human life, whose policies are grounded in the belief that "human life is already cheap," and whose population is largely indifferent when it happens. That country is not Afghanistan.