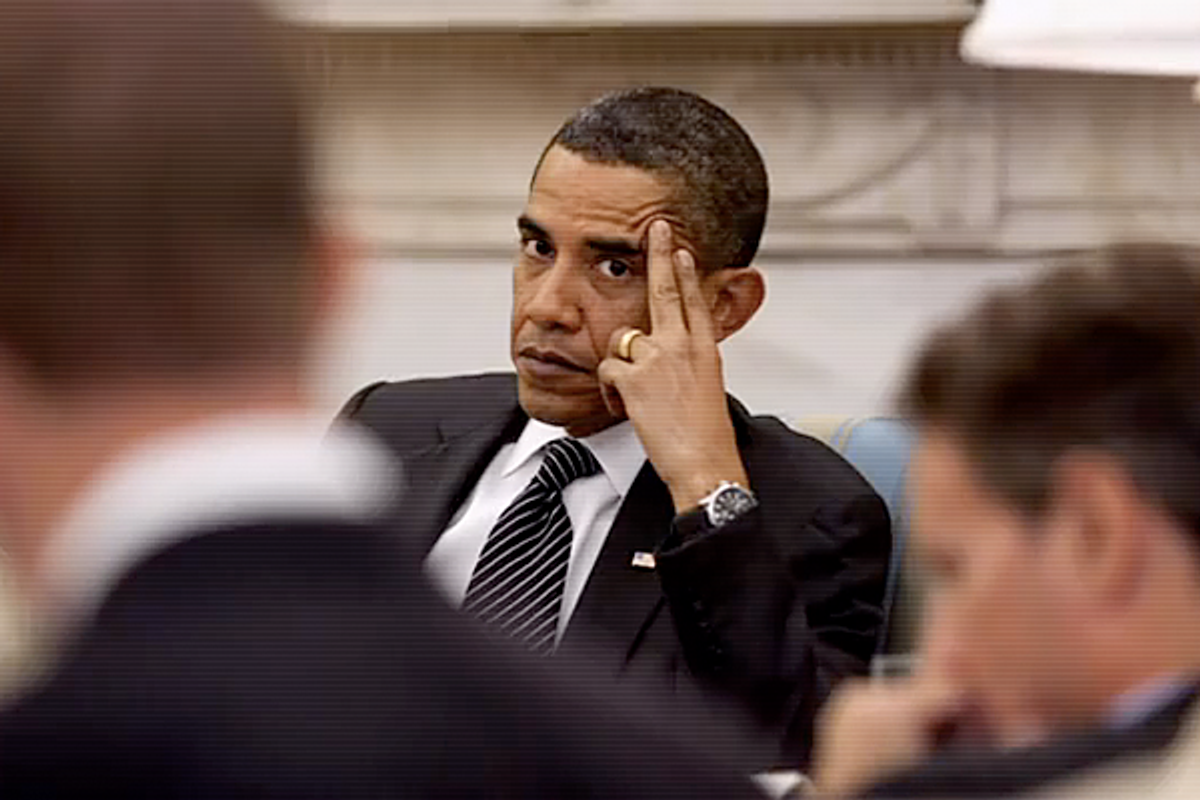 We get to see Barack Obama's 200-watt smile only fleetingly in "The Road We've Traveled," the 17-minute video made by "Inconvenient Truth" director Davis Guggenheim that the president's reelection campaign released on Thursday. (The video is linked above, and embedded below.) No slouch at turning boring non-accomplishments into effective propaganda, Guggenheim knows he's got to save the smile for the right moment, and most of Obama's appearances in the video show him in steely and/or inspirational mode: Declaiming about morality to schoolteachers and autoworkers and gay soldiers, or sitting hunched and pensive in still photographs, surrounded by his economic team as the incoming headlines get worse.

But the money shot, when it comes, is golden. Obama appears very briefly as a talking-head interview subject, talking about the killing of Osama bin Laden -- which is framed, right around the three-quarter mark, as the signal accomplishment of the president's first term. Everybody always wants to know how he felt when he knew for sure that bin Laden was dead, Obama says, but he allowed himself no time for satisfaction or gloating. "Our guys were still in that compound," he says, and he couldn't relax until he knew that "everybody was accounted for, including the dog." (By the way, what dog? Was this known?) Then comes the smile, the big, brilliant, sneaky, I'm-your-cool-friend-and-the-leader-of-the-free-world smile. He kills sinister Arab villains and rescues doggies! Boom -- reelected.

OK, it's undoubtedly not that simple, largely because there's no telling how many people will actually watch "The Road We've Traveled," and because wishing for a viral-video hit is not the same thing as creating one. But Guggenheim has crafted a compelling and superficially convincing narrative out of the Obama administration's three years, turning its real-life history of infighting, indecision and political stagnation into a tale of unprecedented courage and risk-taking.

As Tom Hanks, the film's narrator, intones in describing the Osama attack (over black-and-white still photos of Obama gazing at the World Trade Center memorial and attending 9/11 commemorations), "It was the ultimate test of leadership, a victory for our nation. There would be many others." Indeed there would. Drone attacks that killed numerous civilians in dusty, faraway places; the assassination of United States citizens without any semblance of due process; an obsession with secrecy and clandestine warfare that make Dick Cheney's trip to the "dark side" look like a Goth girl's dorm-room poster. None of those things is specifically mentioned in "The Road We've Traveled," of course, but -- wait, did you hear about the puppy!

Salon's Glenn Greenwald recently (and amusingly) mocked Guggenheim for going on TV with Piers Morgan and failing to come up with one negative thing to say about the president. I'm not sure what he expected: Guggenheim is a highly skilled hired hand, a message-massager whose task is to blend craft and ideology so smoothly that they come to resemble art. He does not make a living by being frank, or by having opinions of his own. He turned a slide show hosted by a famously dull former politician into an Oscar-winning documentary, and tried to repeat that success with "Waiting for 'Superman,'" which was basically a veiled infomercial for the charter-school industry. On balance, I would say that "The Road We've Traveled" is more honest than that film was; it never hides its agenda or feigns a disinterested perspective.

"The Road We've Traveled" is conspicuously aimed at middle-class, largely white and politically moderate voters, both Democrats and independents. These are precisely the people who broke decisively for Obama in 2008, of course, and whom he now needs to lure back. The tone is largely nonpartisan and non-ideological, although the plastic orange mug of House Speaker John Boehner makes a few comic-book-villain appearances. (Nancy Pelosi, who was speaker during Obama's first two years, is never seen or heard from.) Mitt Romney's name appears once, as the author of that infamous "Let Detroit Go Bankrupt" Op-Ed in the New York Times. (That whole thing about tying the barfing dog to the roof of the car? That really does define the guy's character, doesn't it? Come to think of it, is Obama's thing with the dog meant to remind us of that?) Still, certain assumptions are clear: The target audience favors universal healthcare, and is basically OK with public-sector unions, equal pay for women and equal rights for gays.

Guggenheim takes on two apparently disparate tasks in this video, and effortlessly blends them together. The first one is to argue that everything you might have thought was a failing of the Obama administration -- the crap economy, the half-assed healthcare bill, the dragged-out and inconclusive overseas wars -- is actually not just a strength but a historic triumph. "Not since the days of Franklin Roosevelt," says Hanks somberly, "had so much fallen on the shoulders of one president." (An ambiguous, non-provable claim, to be sure, but it might be true.) There's an undeniably defensive quality to the first several minutes, as a parade of expert witnesses -- David Axelrod, Rahm Emanuel, Austan Goolsbee, Bill Clinton -- reflect on the atrocious economic situation that faced the incoming president in 2009, and on his immediate and decisive actions to set things to rights. If it looked more like hapless floundering and Wall Street toadying at the time, they all seem to imply, it's because you weren't paying attention.

The corollary task is to create an inspirational and almost abstract montage that imbues the Obama presidency with a sense of historic purpose and direction. This pays tribute, as every reelection campaign must, to the 1984 "Morning in America" Ronald Reagan ad, still a masterwork of this lightweight-Leni Riefenstahl genre. Hanks' script does not actually include that commercial's famous closer -- "Why would we ever want to return to where we were, less than four short years ago?" -- but that's the unspoken premise of the entire thing.

"The Road We've Traveled" does not convey anywhere near the brimming confidence of Reagan's history-making ad, nor should it. Clear away its splendiferous smoke and mirrors, and Guggenheim's video depicts a reelection campaign poised partway between desperation and optimism, between collective self-delusion and a sense that genuine accomplishments might still be possible. At least as seen in this movie, Barack Obama the candidate holds two genuine trump cards and an ace in the hole. (I'm not even counting the doggie successfully airlifted out of Pakistan, or the fact that Obama's likely opponent is incredibly rich, universally disliked, and practices a minority religion most Americans find weirder than Islam.) He knocked off the world's No. 1 supervillain, and the economy has at last begun to look a little better. If that's not enough, he's also eager to remind you that, no matter how many things he has screwed up in an abysmal and depressing four years, the entire world doesn't think he's a total idiot like that last guy was.