Matt Weiner discusses the new season, the 9/11 ad controversy -- and what the show says about America, now 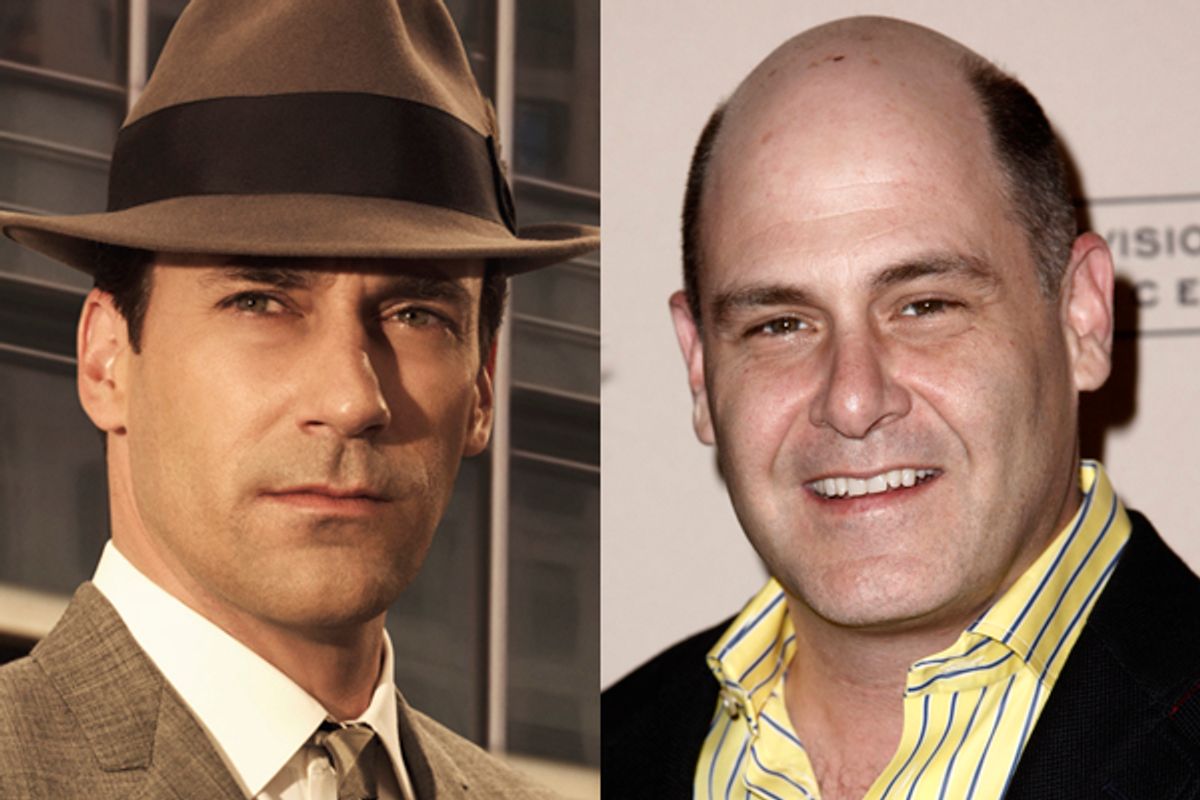 The last new episode of "Mad Men" aired on Oct. 17, 2010. Next Sunday -- a year and and five months later -- we'll finally get another glimpse of Don Draper, Peggy Olson, the other employees of Sterling, Cooper, Draper, Pryce and all their chic outfits, when "Mad Men" begins its long-awaited fifth season.

Matt Weiner, the show's creator, spoke with us about the new season, or, more accurately, spoke with us on the occasion of the new season. Weiner, as you'll see, is a strict constructionist when it comes to spoilers, and in addition to specifically requesting that the press reveal nothing to the audience — not the year in which the new season is set or basic plot developments — he makes sure to answer questions with as few hints as possible. But, even avoiding major plot revelations, Weiner had a lot to say about this year's big themes, all those TV shows aping "Mad Men's" style, the recent controversy about the "Mad Men" ad campaign, and when, if ever, American society is going to get back to normal.

I found it very touching to see these characters again after so long. Did you find that you had missed them?

I did. I did tremendously. Part of the reason that I ended up with a two-hour premiere was because I thought the audience deserved it after waiting so long. And part of it was that I started writing that first episode, and once I had that first episode outlined, it just kept going. It was even longer than what it is. Without having a spoiler about the show, when Joan says, "I missed you all so much," in the premiere, I did feel that when I went back to work. But keep in mind, I went back to work in May; I wasn't off as long as the audience was.

In the time before May, how much were you thinking about the characters and what might be good for the show?

Twenty-four hours a day. Every day, all my dreams, everything I do is somehow affected by this project. Roland Barthes wrote this essay "The Writer on Holiday" about how writers -- not that we work harder than anyone else -- really never stop. That part of your brain is beyond curiosity; it's almost kind of predatory.

Everything is material. I've been lucky because of the show, and I've always had this personality where people tell me things. But I really tried not to think specifically about the show. I really didn't want to have a plan in case my negotiation didn't work out. I didn't want to be heartbroken. I said to myself, "As far as I know, the Season 4 finale is the end of the series." And I try to do that every year anyway, quite honestly. I try to make it so that every season finale could be the end of the series. I plot the story out that way and deliver it that way.

From the premiere, it seems like race is going to be a big theme this season.

I don't know if it is going to be that big a theme. I swear to you, and I'm not just saying that because I don't want it to be in the article! The show is about how change is coming. And change is a joke to these people, because they're insulated and successful and wealthy and whether they like it or not, it's going to end up in their living room. Even if they think it's a joke, it's going to show up right on their doorstep.

The show is not a history lesson. I don't want to ignore what's going on, but I always like to think about how we experience history. Very few times in your life do you wake up and find out that a plane has flown into the World Trade Center. The rest of it is very gradual and small. The war ended this year in Iraq. That will be marked in a history book, and someone, in the future, who is writing about this period, will write, "In early 2012 the war was finally over and Obama went on to the election trail and blah-blah-blah," but we didn't experience it that way. It was a blip, which was incredible because it was one of the longer wars that we’ve been involved in.

Do you have insight into why "Mad Men," this show set in the ‘60s, has pretty much been the Zeitgeist show of the last four or five years?

I don't and I don’t want to question it. It's not my job as an artist. I'm not even supposed to be a part of the culture. I'm just supposed to reflect it, to try to feel it. I'm interested in how society feels, and how the people around me feel.

I remember writing the second season of the show, 1962, and realizing that not only in the history books, but also in my life, people seemed to be obsessed with the end of the world. I kept seeing it everywhere. It wasn't even the 2012 thing, it was like, "Well, we're all going to be here when the world ends." Global warming had just become a huge issue and there was this incredible bleakness about the environment and everything. It's not as bad now as it was then. There was a sort of cultural realization of "We are actually out of oil. We have actually ruined the environment."

Equally, in 1962, it was the same year we were dealing with the Cuban missile crisis. And when I was reading about 1962, which was actually an idyllic period in American history, I found references to the end of the world everywhere. I hope I'm channeling that. I'm not trying to say I'm Nostradamus, but I write about what I'm interested in and what I'm feeling. One of the things that I'm writing about right now is the idea of "When is everything going to get back to normal?" We almost put that statement on the poster at some point.

But knowing the history of the '60s, the audience knows that it's never going to get back to normal.

Do you really know that? Don't you feel that you were at some point in the last three to four years more secure than you are right now?

But in [the year the new season is set]?

I don't want you to say the year! I really don't want you to say it. I'd like for people not to know about that. I don't think the audience wants to know. There's so much to write about, my God, but I can't believe I have to justify why I don't want people to know. I was like, this is the way it used to be all the time! Before the Internet, no one was asking on a daily basis what's going to happen.

So, when is everything going to get back to normal? It's not! This is the new normal!

Ha! Exactly. Maybe it's because I'm 46. Is that why I'm feeling this? But people way younger than me do too, about the getting back to normal. We are suffering such deep national self-esteem problems, that we are turning on each other. People are bringing up issues from like the 18thcentury about marriage and homosexuality and evolution, which, literally, all of us thought that we were beyond. People are questioning whether this country is secular or not. I thought that had been resolved. You look at it and it's not just politics. They feel the same way on the other side.

I've seen the experience of watching the show described as a superiority complex: If you have hindsight you know what's going to happen, and we're so smart nowadays, and the show is saying, "Look how dumb they are." It's not that at all. You're supposed to get a sense of companionship. You're supposed to get a sense of complicity and a sense of the origins of our disease and how this disease is not unique to this period.

Do you feel complimented by all the ersatz-"Mad Men" period-shows [like "Playboy Club" and "Pan Am"] that have popped up?

The compliment for me is that the companies that are making them all hated my script! They were so incredibly dismissive to me. Some of the people who were involved in one of these new shows literally rejected me four times. And to see them jumping on the bandwagon, and to see their perception of why the show succeeded, that it was somehow about haircuts and bra cups. On the other hand, part of me is like, I'm in TV, and there have been plenty of period TV shows.

When I grew up, the biggest TV shows were “Happy Days” and “MASH.” I don’t own this concept. And from a writer's standpoint, any writer who goes through that entire process with a major network and ends up with the show on the air, all they have is my heartfelt congratulations. It is a hard road to hoe. And they don't need me sitting out here wishing failure on them. I don't.

But creatively, I've got to say, why don’t they take a risk doing something else? This was a huge risk for AMC. No one thought that anyone would give a crap about this show. It had no stars, and we were on a channel with no time slot. It had no audience and this is what happened. I bet most networks have a dozen scripts hanging out there that are bold and amazing and new and they never want to do that. They try to make people do stuff that is already out there.

I think it's an excuse for journalists to show that picture again. I do, I think they're exploiting 9/11. The thing that I realized was that a lot more people did not know what the show was: That image is the show. It's been a part of the show since the beginning. To suggest that I'm not reverent to the tragedy is ridiculous. I hate to say it, but a businessman falling out of a window is a symbol that far precedes that event. What I see are journalists looking for a story, going and confronting these 9/11 victims. It's like going to Coretta Scott King and being like, "Do you hate movies where people play your husband?" They can trot out that picture again, which was always a controversial picture to someone who lived through it. As someone who was very, very involved in the campaign, and trying to get people to watch the show, I was stunned that someone would try to bring it up again.

Are you enjoying talking about the show now that some people have seen it?

I am, I'm enjoying talking about it! I have a unique situation because I've finished the entire season and that's never happened before. So when I did this before, there would be this knot in my gut about if I could pull it off, or if I would even live to see the end of the season. But now — I'm not saying that I pulled it off — but at least I am done and have the full experience of something that is a once-in-a-lifetime thing.