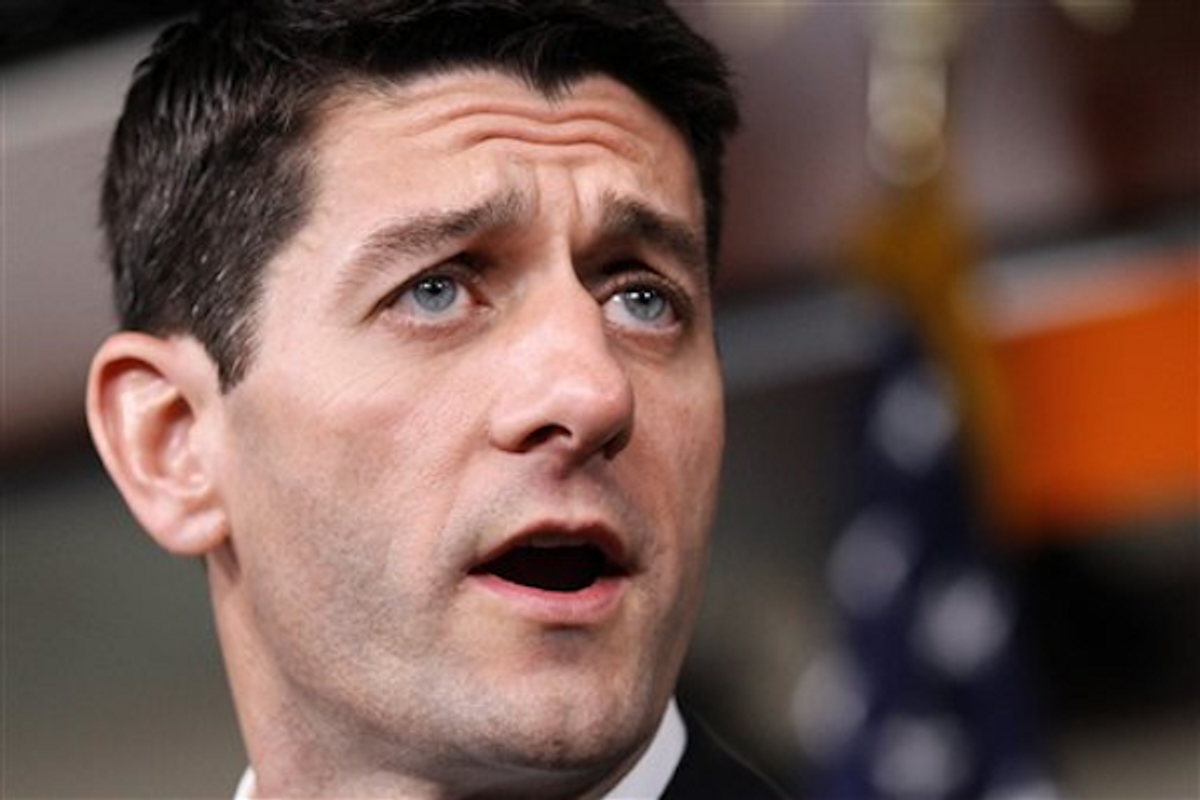 In announcing the Republicans’ new budget and tax plan Tuesday, House Budget Committee Chairman Paul Ryan said, “We are sharpening the contrast between the path that we’re proposing and the path of debt and decline the president has placed us upon.”

Ryan is right about sharpening the contrast. But the plan doesn’t do much to reduce the debt. Even by its own estimate the deficit would drop to $166 billion in 2018 and then begin growing again.

The real contrast is over what the plan does for the rich and what it does to everyone else. It reduces the top individual and corporate tax rates to 25 percent. This would give the wealthiest Americans an average tax cut of at least $150,000 a year.

The money would come out of programs for the elderly, lower-middle families and the poor.

Seniors would get subsidies to buy private health insurance or Medicare – but the subsidies would be capped. So as medical costs increased, seniors would fall further and further behind.

Other cuts would come out of food stamps, Pell grants to offset the college tuition of kids from poor families, and scores of other programs that now help middle-income families and the poor.

The plan would carve an additional $19 billion out of next year’s “discretionary” spending over and above what Democrats agreed to last year. Needless to say, discretionary spending includes most of programs for lower-income families.

Not surprisingly, the Pentagon would be spared.

So what’s the guiding principle here? Pure Social Darwinism. Reward the rich and cut off the help to anyone who needs it.

Ryan says too many Americans rely on government benefits. “We don’t want to turn the safety net into a hammock that lulls able-bodied people into lives of dependency.”

Well, I have news for Paul Ryan. Almost 23 million able-bodied people still can’t find work. They’re not being lulled into dependency. They and their families need help. Even if the economy continues to generate new jobs at the rate it’s been going the last three months, we wouldn’t see normal rates of unemployment until 2017.

And most Americans who do have jobs continue to lose ground. New research by professors Emmanuel Saez and Thomas Pikkety show that the average adjusted gross income of the bottom 90 percent was $29,840 in 2010 — down $127 from 2009 and down $4,842 from 2000 — and just slightly higher than it was 46 years ago in 1966 (all figures adjusted for inflation).

Meanwhile, America’s rich continue to grow richer — and many of them (and their heirs) are being lulled into lives whose hardest task is summoning the help.

Anyone who thought the Great Recession might reduce America’s wild lurch toward wild inequality should think again. The most recent data show that just 15,600 super-rich households – the top 1 tenth of 1 percent – pocketed 37 percent of all the economic gains in 2010. The rest of the gains went to others in the top 10 percent.

Republican Social Darwinists are determined that the Bush tax cuts of 2001 and 2003 be made permanent. Those cuts saved the richest 1 percent of taxpayers (roughly 1.4 million people) more money on their taxes last year than the rest of America’s 141 million taxpayers received in total income.

Thank you, House Republicans, for “sharpening the contrast” between your radical Social Darwinism and those of us who still cling to the belief that the most fortunate have a responsibility to the rest.