The radicalism of our political system outstrips one's ability to mock it; plus: Manning and Bales are together 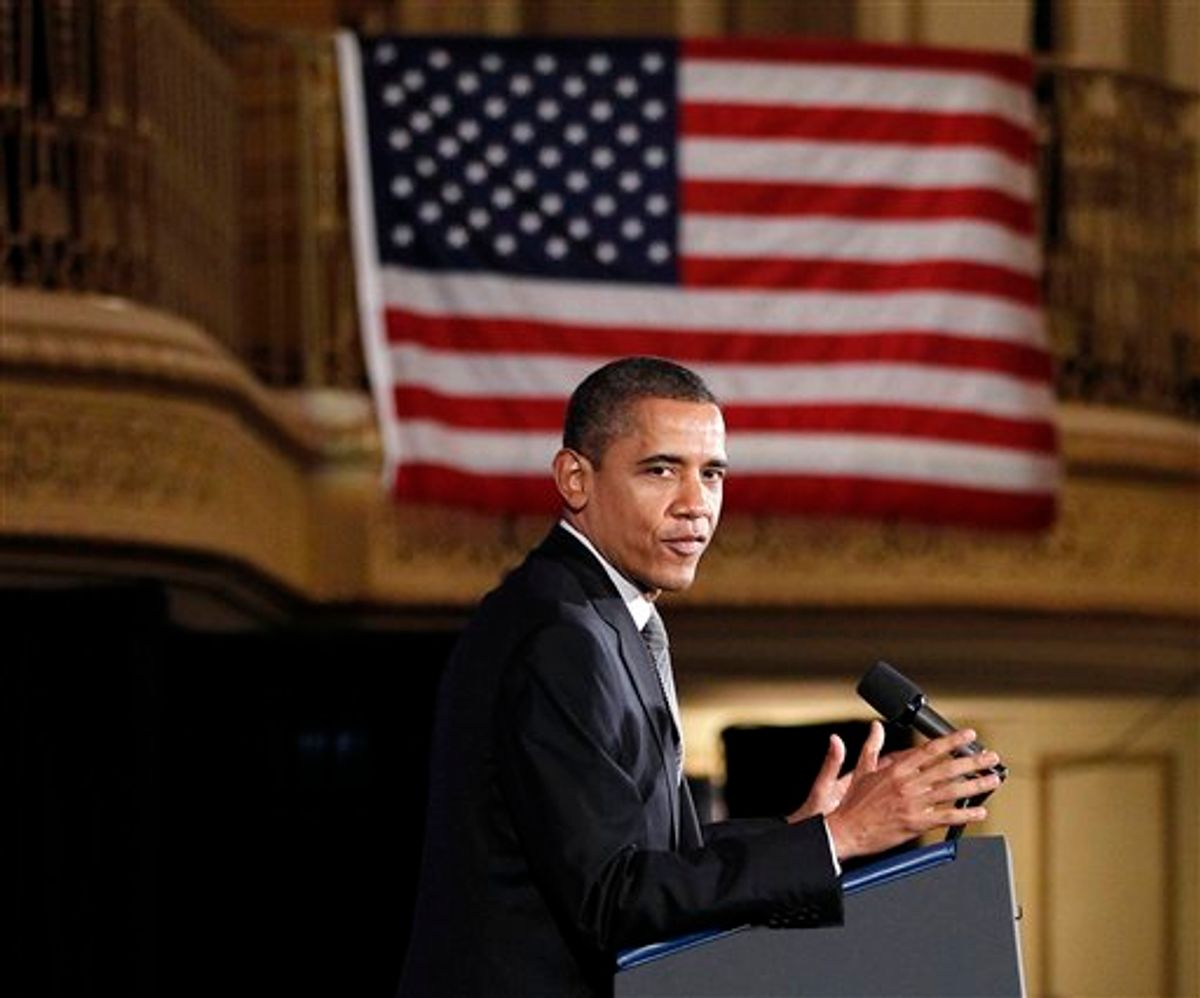 (1) A reader reminded me of this yesterday and it's really quite something: in July, 2009, NBC's Chuck Todd went on Morning Joe to defend President Obama's decision to shield all Bush officials from prosecution for torture, arguing that because Bush got his lawyers to say he could torture, it was legal. I interviewed/debated Todd a couple of days later about those views, but before I did, I wrote a reply to the argument he made on television. When doing so, I tried to think of the most extreme tyrannical and lawless power possible which a President could hypothetically assert, in order to reveal the invalidity of Todd's reasoning, and this is what I wrote:

I’d like to ask Chuck Todd:  if Bush had John Yoo write a memo opining that it was perfectly legal for Bush to deploy hit squads within the U.S. to assassinate American citizens without any due process, would it be wrong to investigate and prosecute that, too, on the ground that everyone had permission slips from a DOJ lawyer and that's just what lawyers do?

The current President has, of course, obtained his own DOJ permission slip to assassinate American citizens without due process. Since that permission slip is too secret for us to see, we do not know whether the authorized assassination power is confined to foreign soil or extends to the U.S., although once one embraces the Bush-Cheney-Yoo theory that the entire world is a "battlefield," there is no coherent way to limit those asserted powers to foreign soil. In any event, the real point here is that our government has become so radical and warped that it outstrips one's ability to create absurd hypothetical powers to test the validity of a principle: before you blink your eyes, you find that your hypothetical has become reality.

(2) Yesterday, the Obama administration -- which, in the past six months alone, has killed three American citizens in Yemen: Anwar Awlaki, Samir Khan, and Awlaki's 16-year-old son Abdulrahman -- smashed the limits of all known irony charts:

(3) After Bradley Manning was arrested on charges that he leaked documents to WikiLeaks, he was held in intense solitary confinement for ten months until political pressure finally forced his transfer to more humane conditions in Fort Leavenworth; the top U.N. torture official last week concluded that Manning's treatment during those 10 months was "cruel and inhumane." By stark contrast, Staff Sgt. Robert Bales -- the prime suspect in the slaughter of 16 Afghan civilians -- is already at Fort Leavenworth and is receiving this treatment:

Bales arrived at Fort Leavenworth last Friday and is being held in an isolated cell. He is "already being integrated into the normal pretrial confinement routine," prison spokeswoman Rebecca Steed said.

The routine includes recreation, meals and cleaning the area where he is living. Steed said once his meetings with his attorneys are complete later in the week, Bales will resume the normal integration process.

An ABC News article back when Manning was transferred to Fort Leavenworth included these details:

The 150 inmates at the facility — including eight who are awaiting trial — are allowed three hours of recreation a day, she said, and three meals a day in a dining area.

That likely means that there will be some substantial interaction between Bales and Manning. Think about that: if you expose to the world previously unknown evidence of widespread wanton killing of civilians (as Manning allegedly did), then you will end up in the same place as someone who actually engages in the mass wanton killing of civilians (as Bales allegedly did), except that the one who committed atrocities will receive better treatment than the one who exposed them. That's a nice reflection of our government's value system (similar to the way that high government officials who commit egregious crimes are immunized, while those who expose them are aggressively prosecuted). If the chat logs are to be believed, Manning decided to leak those documents because they revealed heinous war crimes that he could no longer in good conscience allow to be concealed, and he will now find himself next to a soldier who is accused of committing heinous war crimes.

(4) I have an Op-Ed in The Guardian on the quick removal of Bales from Afghanistan and the resulting exclusion of Afghans from the investigation into what happened. Today, The New York Times explains the serious difficulties this could pose to Bales' prosecution:

The case could founder in the courtroom on questions of evidence collected under difficult conditions thousands of miles away, . . . .Gathering evidence and securing the cooperation of witnesses can be bedeviling in far-flung places, and contributed to the collapse of the prosecutions against Marines linked to the killings of 24 men, women and children in the Iraqi city of Haditha. Charges were dropped against most of the Marines who were tried in that case.

Perhaps trying him in Afghanistan would have solved those problems. It is true that American soldiers accused of commiting crimes are not legally subject to the Afghan judicial system, but that does not mean that their trials cannot take place in Afghanistan, thus ensuring the inclusion of Afghans in the investigation and the subsequent attempts to bring justice to those who deserve it.

(5) There are a couple of articles that have appeared in the last week or so about the willingness of many Democrats to passively accept or even actively cheer for policies under President Obama that they vehemently condemned (or would have condemned) under President Bush: this from Politico, and this from Tim Carney at The Washington Examiner. Back in June, 2009, New York Times columnist Bob Herbert -- once an ardent admirer of President Obama -- wrote a column lambasting his civil liberties record, and this was the first sentence in Herbert's column: "Policies that were wrong under George W. Bush are no less wrong because Barack Obama is in the White House." At the time, I truly did not fathom how that principle -- which really should just be an unstated axiom -- would not only come to be so controversial but routinely violated and ignored.

(6) In November, 2011, Jonathan Chait wrote an article for New York Magazine castigating liberals as "unreasonable" for failing to revere President Obama as much as Chait does. Today, Chait wrote an article entitled "How Obama Tried to Sell Out Liberalism in 2011" about a new Washington Post piece detailing the President's attempts last year to massively cut Social Security and other entitlement programs without any new revenue. Chait concludes: "What the story actually shows is that Obama's disastrous weakness in the summer of 2011 went further toward undermining liberalism than anybody previously knew." This was the essence of Chait's accusation back when he was in Obama-hagiography mode: "Liberals are dissatisfied with Obama because liberals, on the whole, are incapable of feeling satisfied with a Democratic president." The Prime Progressive Pundit Principle: The permissible range of Obama criticism is precisely equal to the amount that I criticize Obama.

Meanwhile, Chait's primary competitor for supreme Obama media defender, Andrew Sullivan, has spent this week doing what he often does: insisting that President Obama is a True Conservative, and that the Right is therefore irrational for not adoring him the way that Andrew does. Notably, Andrew is equally fond of attacking liberals who fail to adore the President as much as Andrew does, on the ground that Obama has achieved more progressive goals than any President in decades. In other words, Andrew's core defense of the President -- set forth most comprehensively in his Newsweek cover story declaring the President's critics on both the right and the left to be basically stupid and crazy -- amounts to simultaneously claiming that: (1) conservative critics of Obama are dumb because Obama is a Real Conservative; and (2) liberal critics of the President are dumb because Obama's presidency is a bonanza of progressive successes. As Guy Saperstein put it: "The fact that these two critiques are internally inconsistent has somehow managed to escape Mr. Sullivan."

What seems to permit these simultaneously held views is the belief that President Obama's personal greatness is so vast and profound (perhaps deserving of Mount Rushmore elevation given the pile of corpses he's assembled) that he is actually both The Great Conservative President and The Great Liberal President all rolled into one. He deserves the gratitude and admiration of everyone regardless of their agreement with his policies and actions: that's how fantastic he is as a leader. That said, Andrew really seemed to enjoy the White House state dinner to which he was invited last week, including his "warm chat with the president" and discovering "the impact that the Newsweek Obama cover-story had on Obama donors and staffers," so that's good. It's important and gratifying as a journalist to know that you've given something of great value to a politician's donors and staffers; isn't that why the Founders insisted on a free press?

(7) I was on Al Jazeera's Inside Story yesterday debating the material support given to MEK, a designated Terrorist group, by many of Washington's most well-connected former officials. It was a robust and contentious debate, well worth watching, and I'll post the video when it's available. NBC News reported last week that more subpoenas have been issued seeking to investigate payments to these officials, now including former Gov. Ed Rendell, ex-FBI Director Louis Freeh, and former chairman of the Joint Chiefs of Staff Gen. Hugh Shelton. The extremely broad "material support" laws are a grave threat to free speech and free association, but nobody of any significance in Washington cared or objected when the ones being imprisoned were powerless, nameless Muslims (indeed, some now receiving payments from MEK were the same ones cheering or even perpetrating those "material support" prosecutions). Perhaps this is what is needed to motivate those with influence to put a stop to these McCarthyite prosecutions. I would draw an analogy to the Drug War: injustices are easy to perpetuate when they primarily affect those who are powerless and marginalized; it's much more difficult when they apply equally to those with power.

UPDATE: Here's the aforementioned (contentious though enlightening) Al Jazeera debate on MEK in which I participated yesterday with Patrick Clawson of The Washington Institute for Near East Policy and Reza Marashai of the National Iranian American Council: