Before violence erupted in Syria, Bashar al-Assad and his fashionable wife, Asma, were sometime media darlings 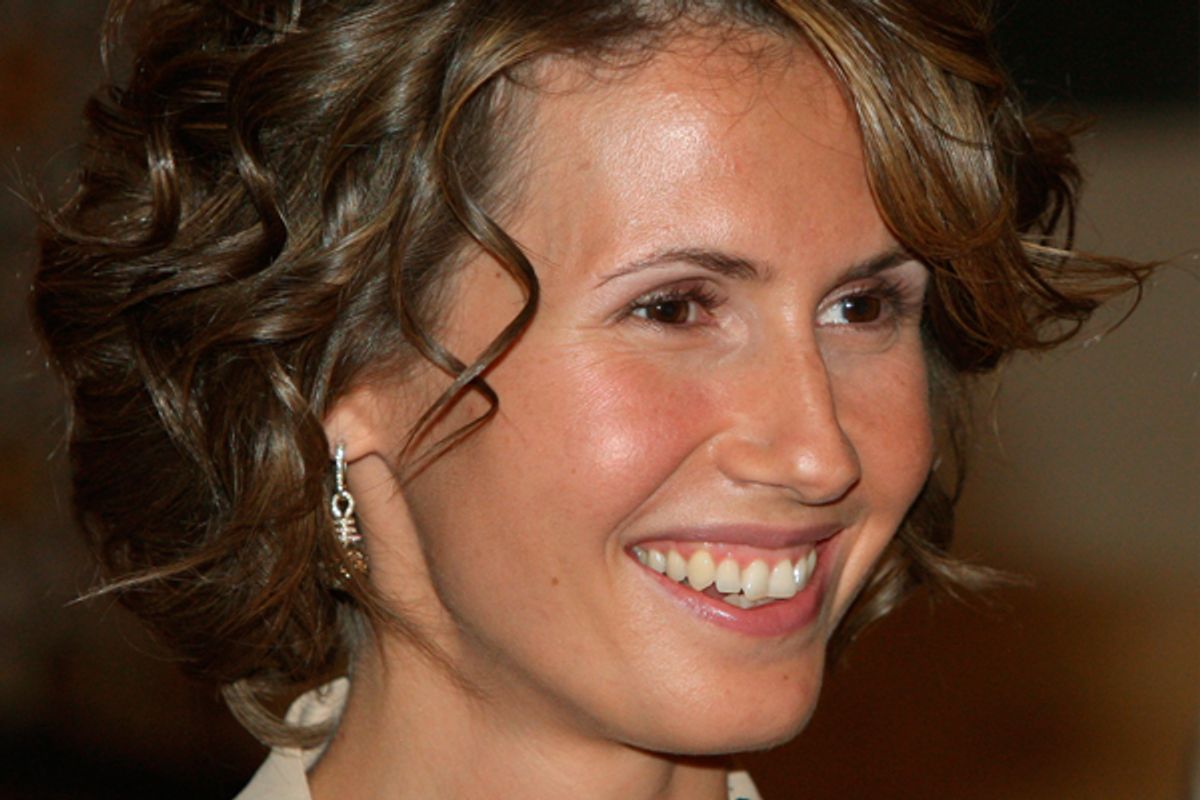 Though the news out of Syria has been almost uniformly awful recently -- fighting spreading to Damascus and Aleppo, rumors of Russian "anti-terror" troops in the country supporting President Bashar al-Assad, accusations of human rights abuses by some anti-government forces -- we have been treated to a fascinating glimpse into the private world of an embattled dictator, thanks to the leak of thousands of Bashar al-Assad's personal emails. The trove has proved to be perversely comic, with female aides sending the strongman little love notes and at least one unsubstantiated underwear picture. The emails also offer insight into the life of Assad's wife, Asma, who has continued buying -- or attempting to buy -- expensive luxury goods while her husband struggles to maintain control of his country. They're both international pariahs now (except in Moscow), but not long ago, self-pitying Bashar and his fashionable wife, Asma, were two of the Western celebrity media's favorite autocrats.

Asma al-Assad is British born and, yes, a former banker. She worked at Deutsche Bank and J.P. Morgan before marrying Bashar and moving to Syria to be that country's first lady-for-life. Because she grew up in secular, liberal Britain, and is worldly and cosmopolitan, lots of people assumed, without much in the way of evidence, that she'd help her husband "modernize" Syria, and push him to support women's rights and more civil freedoms. Now he's clinging to power by any means necessary, and thousands of people are dead.

The fact that Asma al-Assad is "one of us" -- a native English-speaker with a finance background, the sort of person a globetrotting journalist would probably get along with -- led a lot of very bad journalists to assume that the Assads were not actually that bad; "This man is not like Qaddafi," in the words of Barbara Walters, who vacationed -- actually vacationed! -- with the Assads in 2008. Here's Ann Curry's glowing profile of the glamorous Syrian first lady from the NBC Nightly News back in 2008:

Asma Assad is a revelation — with a competitive edge learned on Wall Street, a light-up-the-room charisma, and a down-to-earth touch. Born and raised in Britain, she is now the modern face of Syria."

(Ann Curry's second-best line: "Do you ever pinch yourself, stop and say look, I am the first lady of Syria?")

Even more embarrassing, somehow, was Vogue's Asma al-Assad profile, which, unfortunately for Vogue, ran shortly after the bloody crackdown began, at the beginning of last year. The magazine has disappeared the story, but it's readily available online. Assad's brutality made the entire thing read like a sick joke -- a thousand dead rebels, civilians and children make it much harder to understand why it's admirable or impressive that the wife of Syria's autocratic leader is glamorous and modern. ("On Friday, the Muslim day of rest, Asma al-Assad opens the door herself in jeans and old suede stiletto boots, hair in a ponytail, the word happiness spelled out across the back of her T-shirt. At the bottom of the stairs stands the off-duty president in jeans—tall, long-necked, blue-eyed." All three of the Assad's children, we also learn, attend Montessori school.)

It turned out, of course, that the Syrian government had contracted with a major American and British P.R. firm to help convince Vogue to run that glamorous photo shoot and soft-focus profile. (The same P.R. firm that reps for MEK. It's a small world, and one full of so many deplorable people.) It seems weirdly appropriate for such a "modern" dictator that the increasingly isolated Assad relies more and more on the counsel of various young women with P.R. experience.

Well, it turned out that when Asma al-Assad, in Vogue, described her household as "wildly democratic," she was being not just viciously ironic but also facetious. She described herself, with a particularly poor choice of words in an email to a friend, as "the REAL dictator" in the Assad household, because she makes her actual dictator husband listen to her. Oh, those Assads.

The good news is that the EU has decided to make it marginally more difficult for Asma al-Assad to buy things on the Internet. But the Assads are a useful object lesson for future dictators: Good P.R. and Western elite consumer habits will go a long way to convince certain people that you can't be that bad.