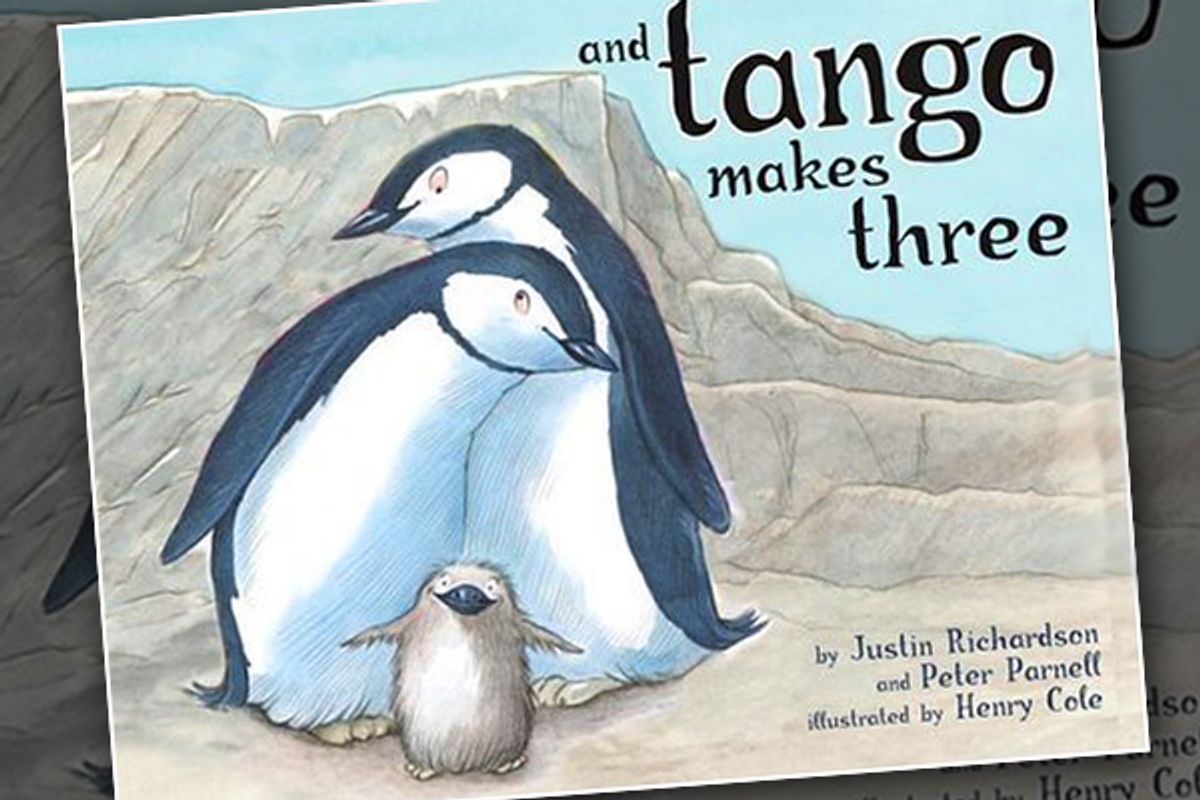 One of the American Library Association's most challenged books of the last decade has disappeared from yet another library. It's a tome that topped the ALA's list last year, and has made waves ever since its publication. Yet the book that so concerned a Rochester-area parent that the public school system there yanked it earlier this month wasn't Lauren Myracle's gritty, haunting "Shine." It wasn't Suzanne Collins' intense, violent Mockingjay series. It was a picture book about a penguin family. Hide your kids!

"And Tango Makes Three" is the gentle tale of Roy and Silo, two penguins from the Central Park Zoo who "built a nest of stones" and "every night they slept there together, just like the other penguin couples." Soon, the narrative finds Roy and Silo taking turns sitting on an egg provided by a helpful zookeeper, and hatching and raising their baby Tango. It's a story of love and family and adoption. Oh, and there's just one other thing. As authors Justin Richardson and Peter Parnell explain it, those "two penguins in the penguin house were a little bit different. Roy and Silo were both boys."

Making matters even more shocking, "And Tango Makes Three" isn't just some fanciful, gay-agenda fairy tale cooked up to indoctrinate our children. It's based on the real story of Central Park penguins Roy and Silo, who made headlines in 2004 with their same-sex-oriented love affair and eventual hatching of another penguin couple's egg. Gay penguins, in fact, are pairing off in zoos all over North America lately. Probably just to spite Rick Santorum.

This latest banning began last fall, when a Gibbs elementary school parent got wind of the book about those two flightless birds and their ability to nurture a chick, deemed it "inappropriate for elementary school students," and asked to have it removed from the school library. The district's Committee for Reconsideration of Resources deemed the book suitable to remain on the shelves and rejected the request.

But then the parent made the request again, and this time School board Chairwoman Julie Workman, Vice Chairman Gary Smith and Superintendent Michael Muñoz took it upon themselves to pull the book from the Gibbs school. Perhaps they were all just outraged that "And Tango Makes Three" failed to mention that Roy and Silo broke up six years ago, when Silo took up with a penguin named Scrappy. A female penguin. It's all so selective. Like a Mike Daisey show.

Yet here's where the tale takes a turn. On Monday, Muñoz admitted that he and his cohorts did not follow district protocol when they pulled the book, and district spokeswoman Jennifer Pozanc announced that "If it has not [been restored to the library shelf], it will be soon." Meanwhile, the Rochester Public Library can't lend it fast enough. "Our hold list went from two to 15 in the last two days," librarian Kimberly Edson told the local ABC news affiliate.

The district will hold a full public hearing on whether the book should stay or go on April 10. But it's an encouraging sign that locals are now interested enough in the book – and the subject matter it addresses with tenderness and sensitivity – to get it wait-listed at the public library. And the fact that for now, schoolchildren in Gibbs can continue to get the message that "two daddies" can feed and snuggle and play with their baby, "just like all the other penguin families," makes for a very happy ending.