The secret of Mitt’s success

The key to his big delegate lead: The Mormon Corridor, non-voting territories and the bluest region in America 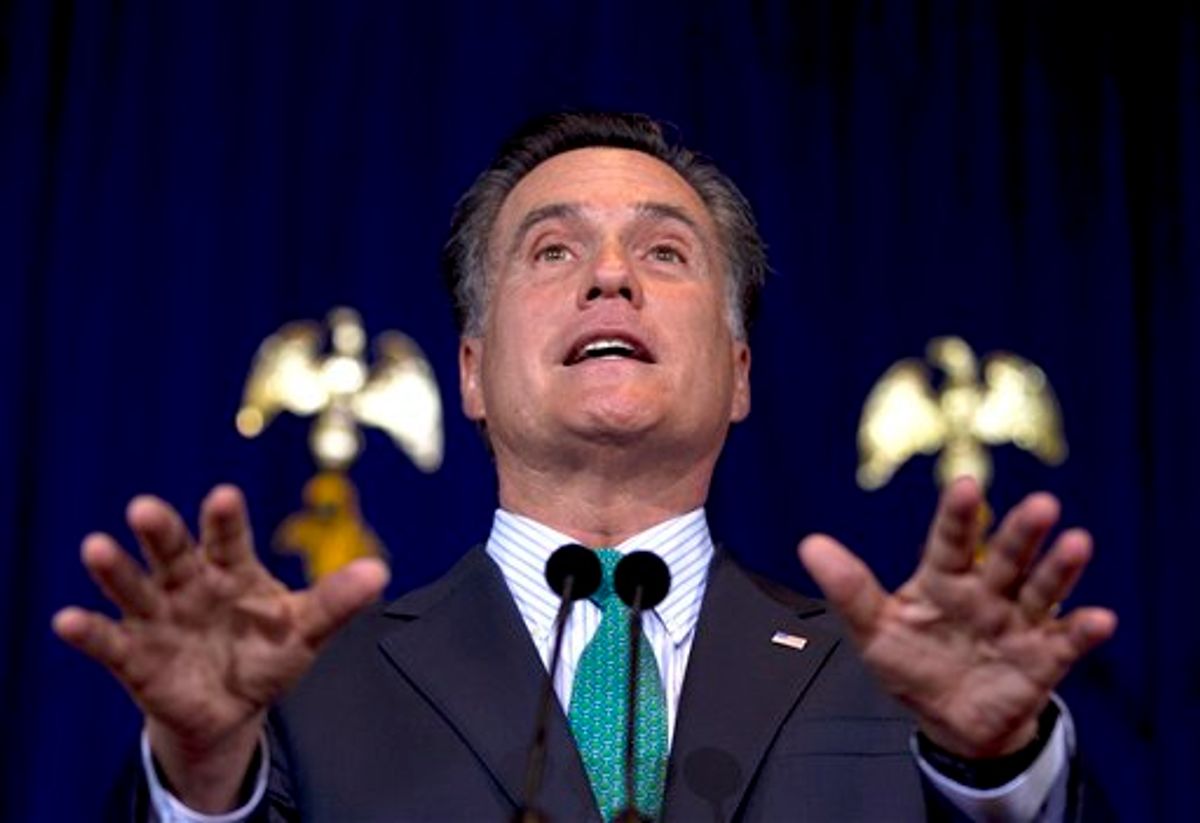 If Mitt Romney does secure the Republican nomination – and it’s still likely he will – some very unusual math will be a big reason for it. The past week tells the story well.

In the two highest-profile contests last Tuesday, each in the heart of the most deeply Republican region in the country, Romney finished in third place, behind both Rick Santorum and Newt Gingrich. Those setbacks in Alabama and Mississippi continued Romney’s string of futility in the South, where his Northern roots, culturally liberal past, and maybe even his Mormon faith have stirred suspicion among the conservative evangelicals who dominate the region’s GOP politics.

But if you look beyond the bad headlines that came with the Mississippi and Alabama results, it actually wasn’t a bad week at all for Romney, who swept the three other contests on the board -- Hawaii, American Samoa and Puerto Rico. This allowed him to build on what was already a sizable lead in delegates, an advantage that figures to grow when the votes in Illinois, a state with a more moderate GOP tradition and where evangelical clout isn’t as pronounced, are counted tonight.

Illinois, Puerto Rico, American Samoa and Hawaii all have something in common, of course: They won’t be voting for the Republican ticket this fall – two because they’re blue states, and two because they’re U.S. territories whose residents can’t participate in presidential elections. This speaks to the very unusual formula that Romney has been exploiting -- deep concentrations of support in Democratic states and regions, under-the-radar venues, and areas with substantial Mormon populations, all amplified by his campaign’s outsize edge in money and organization.

The difference this has made for Romney can be seen by comparing his performance so far in contests that meet these criteria with how he’s done everywhere else. First, consider the overall popular vote and delegate totals for all of the Republican primaries and caucuses that have been held:

(Note that there is no consensus on what the current delegate count actually is. For the purposes of this exercise, we’ll use the AP tally, which apportions pledged delegates in caucus states based on the results of nonbinding straw polls conducted in conjunction with local caucuses. The popular vote numbers are from RealClearPolitics.)

Leaving votes for minor candidates and those who have dropped out, this translates into a popular vote breakdown of 39.71 percent for Romney, 26.57 percent for Santorum, 23.01 percent for Gingrich, and 10.72 percent for Paul.

But now let’s look at Romney’s wheelhouse, which can be separated into three distinct categories:

This includes Puerto Rico, Guam, American Samoa, the U.S. Virgin Islands and the Northern Marianas. None of these jurisdictions will vote in the November election, but all will have seats at the GOP convention in Tampa. The results so far:

(Note that Puerto Rico was the only one of these contests for which a measurable popular vote is available.)

This includes Massachusetts, Vermont, New Hampshire and Maine. Romney owns homes in half of these states, served as governor of Massachusetts, and has benefited from the very small role that evangelical Christian’s play in New England Republican politics. This is the bluest region in the country; since 1988, just one state in it has voted Republican in a presidential race – New Hampshire in 2000, by just 7,000 votes. The results so far:

This includes Nevada, Arizona, Wyoming, Colorado, Idaho and Hawaii, states with Mormon populations significantly larger than the national level. All of the available data indicates that Mormons have been functioning as a virtually monolithic Romney voting bloc in this campaign. The definition of a Mormon Corridor state is a little tricky, since exit polls weren’t conducted everywhere. But Nevada, Arizona, Wyoming and Idaho clearly belong. Hawaii and Colorado, where Mormons account for about 5 percent of the statewide population, are trickier calls, but are included here (making Colorado, whose caucuses Romney narrowly lost to Santorum, the only state on this list that Romney didn’t actually carry). The results so far from the Mormon Corridor:

In addition, Romney’s victory in Virginia’s primary should also probably be separated from the overall national results, since he and Paul were the only two candidates whose names appeared on the ballot. The same can be said for the results of Missouri’s beauty contest primary, where Gingrich’s name was absent from the ballot. So if we take those two states out of the national mix along with the Territories, New England and the Mormon Corridor, here’s how the GOP race would stand right now:

In other words, more than half of the 507 delegates Romney has won so far have come from contests from those three magic categories (plus Virginia). So has a significant chunk of his popular vote advantage.

Everywhere else in the country, the race is much closer, and the smaller leads that Romney enjoys are partly the result of the strength he’s shown in solidly Democratic population centers of big states. They’re also a product of his superior campaign operation, which has exploited just about every available opportunity to pick up extra delegates. Santorum, by contrast, has missed ballots and occasionally filed incomplete slates, depriving him of delegates where he’d otherwise receive them (a trend that will continue in Illinois).

Obviously, none of this means that Romney won’t be a legitimate nominee if he does break the 1,144-delegate mark. The rules are the rules, and he apparently grasps them better than his rivals. And it’s not like Republicans living in blue states don’t deserve a voice in the party’s nominating process.

Still, it’s a reminder that a Romney nomination wouldn’t really be testament to his success at winning over the skeptical party base, as hard as he’s tried to do so. He’s enjoyed just enough support from the conservative rank-and-file to avoid a meltdown, but what’s really saved him – and what still has him in the driver’s seat in spite of the losses he keeps enduring – is his strong support in the bluest region in the country and in territories that won’t be voting this fall, his unique appeal to Mormons, and his opponents’ comically unprofessional campaign organizations.